14th, Feb, 2017
2017 already started off on a good note for Indian the Indian esport community and if latest reports are to be believed then we are in for another pleasant surprise. Earlier this year UCypher was announced and with a name like Ronnie Screwvala backing  it, the news spread like wildfire. Now NDTV’s Gadget 360 reports that one of India’s oldest game studios, Nazara Games have announced their entry into the esports sector.

Nazara Games, mostly known for their mobile games have over 19 million downloads from the PlayStore in 2016 alone and are now ready to foray into the esports sector which has been booming globally in recent times. Just like the UCypher announcement, Nazara too recognizes the entertainment factor in esports and with new age millenials flocking to digital platforms to consume content they plan to make a spectator sport out of esports. If initial reports are to be believed then UCypher have earmarked an initial budget of USD 20 million or ~INR 136 Cr to be spent over the course of 5 years. But that isn’t all. They are also looking to tie up with tournament organizers and industry leaders from across the world as they look to grow and may be putting in more money as and when opportunities arise.

Exact details of the format/prizepool or dates aren’t out yet but with things picking up so quickly, expect an announcement anytime soon. However the source article does mention that a portion of the budget will be used for developing players and talent at a grassroots level. The standard titles, Dota 2, Overwatch, CSGO and FIFA should find their places but there might be special initiatives to reward mobile gamers. Considering that Nazara Games are primarily mobile game developers and recent market studies have shown that mobile games in India have a lot of potential here, the inclusion of mobile games seems very likely.
We will be bringing you updates, as and when updates are made so do stay tuned. 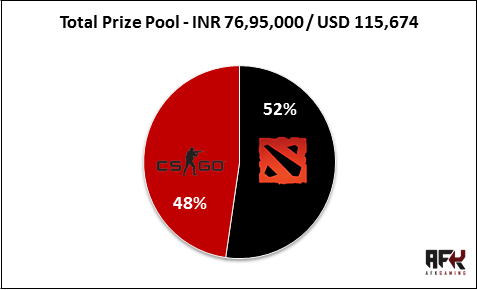 In 2016, the esport prizepool in India hovered somewhere around INR 77 lakh, spread mostly between Dota 2 and CSGO. Given the phenomenal growth rate of the Indian esports ecosystem, we expect this number to double at the very least in 2017. With announcements like UCypher and Nazara and the announcements expected for season 2 of ESL India Premiership and IeSC not only can we hit the massive figures, we can actually set eyeballs rolling across the world.