Nishant PatelPublished On: 04 Jan 2018, 05:45 PM
2017 has been a remarkable year for Indian esports. Prize pools have nearly doubled year on year, Indian teams have begun to show signs of life at international events and television boxes are now broadcasting esports competitions. In 2016 we explored the existence of steady growth coupled with the potential to springboard off an inflection point. With the inflection point being left in the dust now, the storyline going forward is about setting up the landscape for major media rights deals and a chance to establish an India based International IP.
For those of you that haven’t read the 2016 edition of this article, you should know that this write up represents opinions based off data that AFK Gaming has gathered through publicly available sources and through AFK Gaming’s own database. We continue to believe that Dota 2 and Counter Strike : Global Offensive are the largest competitive games in the country in terms of both player base and prize pools and hence this article will focus heavily on these two titles. That said, 2017 has witnessed the emergence of Overwatch and Clash Royale as serious contenders too and despite public stats for the two not being easily available, we’ve chosen to touch upon their progress in the country as well.

Disclaimer: This is not meant to be an unbiased research report. Views and opinions contained in this article are my own however if you’ve got a different perspective about things feel free to start a discussion thread about it. AFK Gaming has worked closely in official and unofficial capacities with most of the organizations mentioned within this article.

Please Note : The purpose of this write up is to provide an in depth look at Indian esports for both new entrants as well as existing industry participants. This data was not easy to compile and analyse and as such, we hope that you provide due credit to www.afkgaming.com if and when you use content from here elsewhere.

Assuming that all of the announced tournaments in 2017 pay up, the total amount of prize money to be won at Indian esports competitions is over INR 2,06,91,300 / USD 325,693. This consists of cash prizes paid / to be paid for Dota2, CS:GO, Overwatch, FIFA, Clash Royale, Just Dance, Cosplay Contests, Rocket League, Tekken, Street Fighter and NFS Most Wanted.

53.37% (INR 1,10,42,800 / USD 173,820) of this comes from tournaments created and / or organized by NODWIN Gaming – making them the first Indian esports organization to cross the INR 1 Crore prize money threshold in a single calendar year. While the overall amount that they have paid out has more than doubled from 2016, their share in the overall prize pool has dropped from 69.66% in 2016. 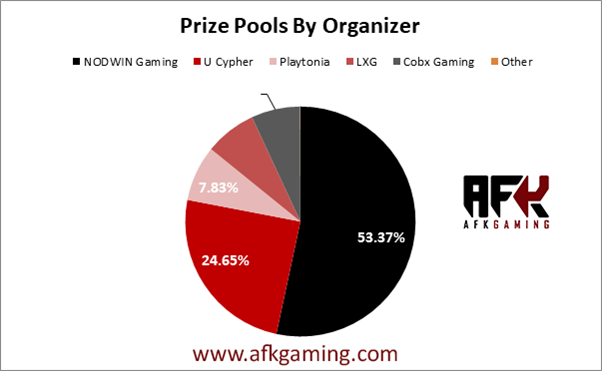 Unisports and Management, the company behind Ronnie Screwvala’s U Cypher tournament has announced a prize pool of INR 51,00,000 / USD 80,277. This tournament alone will account for 24.65% of the year’s total prize pool however participation for this event was by invite only and the tournament has not officially aired in C.Y. 2017.

A game wise breakup has not been made public for U Cypher’s prize pool and as such, the amount of INR 51 lakhs has been excluded while calculating which games contributed the most to the total. 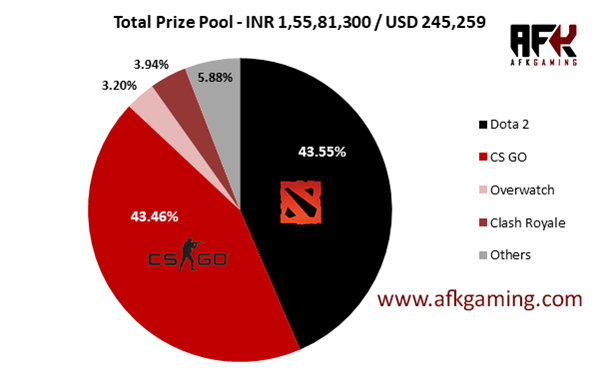 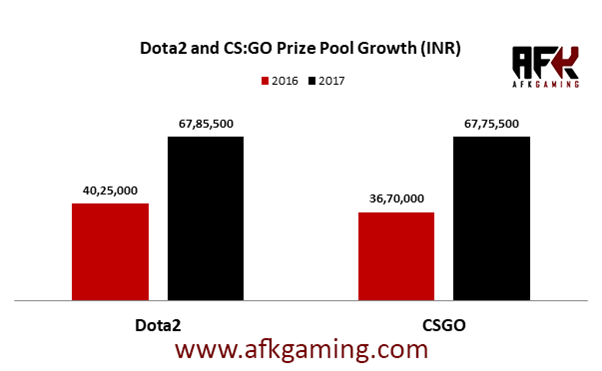 The total cash component paid out for Overwatch was in the ballpark of INR 6,00,000 / USD 9,444 with the majority of this being paid out via LXG India’s tournament – ILG.

Soaring prize pools are certainly indicators of the industry’s growth, however the limelight was stolen by an Indian television channel Dsport when they chose to broadcast CS GO matches from the Fall season of the ESL India Premiership and a re-run of The International Dota 2 championships. Signs point towards the emergence of an additional and potentially gargantuan revenue stream for tournament organizers in 2018 – media rights.

Participation for Indian Dota2 and CS:GO continues to average at about 100 teams per major tournament. However, as of 2017 CS:GO tournaments have begun to outperform Dota2 in terms of both participation and viewership. Counter Strike’s increasing success could be attributed to a multitude of factors some of which are as follows: SteamSpy Data is in tandem with this observation as a higher number of active Steam users seem to be playing CS:GO in India rather than Dota 2. The only time Dota witnessed a noticeable spike in viewership and engagement was when the Cambodian Team IQ Dota crowdfunded their way to the ESL India Premiership Summer LAN finale, thereby creating a gripping story line worth following by both Indians and Cambodians alike.

NVIDIA has been one of the key drivers behind Overwatch’s growth in India via high quality production tournaments and community focused activities built around the GeForce Cup and Gamer Connect Hyderabad. Participation for Overwatch tournaments varies between 8 to 20 teams and while this pales in comparison to the hundreds that sign up for Dota2 and CS:GO tournaments, we cannot ignore the fact that Overwatch is an expensive game and doesn’t have the same frequency  or scale of tournaments yet. AFK Gaming is bullish on competitive Overwatch’s growth in the Asian region come 2018, however any talk of a spill over effect aiding the growth of Indian Overwatch is merely speculation at this point that is unlikely to play out in the absence of direct publisher efforts.

Major Pending Developments that were Announced in 2017

A couple of major announcements shook the Indian esports world in 2017 however not all of them have come to fruition just yet. Here’s a quick look at each announcement and what the entity behind them has done since. 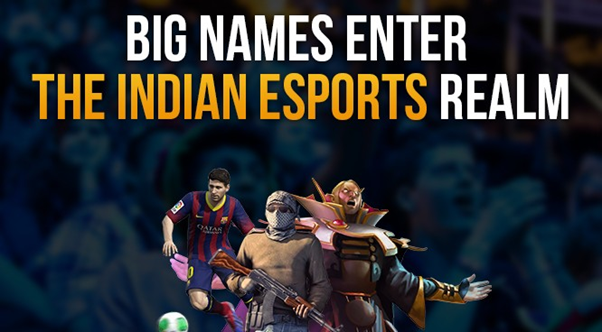 The year opened on a high note when Ronnie Screwvala’s company announced an Indian esports league with an investment of upto INR 100 Crore (USD 15,740,595). Announcements have confirmed that the show will air on MTV India and that the total prize pool for the tournament is INR 51 lakhs spread across four game titles – Dota2, CSGO, Real Cricket and Tekken 7. Since the initial announcement, the public eye hasn’t been treated to much save some promotional material on U Cypher’s social media. While no official dates have been announced just yet, the show is expected to air in early 2018 and when it does, we expect a whole new set of eager eyeballs to enter the Indian esports fold.

In March 2017, the Economic Times reported that the founder of Route Mobile was set to invest $10 million to promote esports in India. The report mentioned three significant planned activities –
The organization kicked off their efforts in April with the Cobx Indian Gaming Championship – an INR 10 lakh online Indian Dota2 and CS GO tournament that AFK Gaming had the pleasure and honour of associating with as knowledge partners.

In July, the organization announced Team Signify – a Mumbai based international Dota2 roster  with players from India and the Philippines. Signify continues to dominate the Indian Dota2 circuit today albeit with an all Indian roster now.

While no concrete announcements for the international tournament with a prize pool of USD 300,000 have been made yet, Cobx Gaming posted a cryptic teaser on their Facebook page earlier in August which could be an indicator of things to come.

Their year ended on a good note as Cobx and Signify were announced as sponsors at Techfest Razer Gaming League. Teasers of an announcement in early 2018 were spotted on standees there as well. Delays when planning an event of this scale are understandable and we can only hope with fingers crossed that Cobx Gaming has a treat in store for Indian esports fans in the new year. 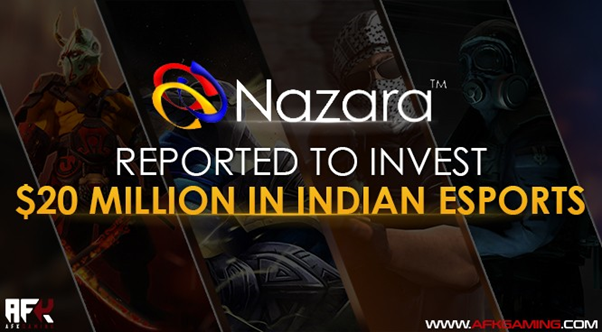 Nazara Games, known for their mobile games that clocked over 19 million downloads from the PlayStore in 2016 alone announced in February that they were going to invest INR 136 Crore into Indian Esports. The entire budget was to be spread over a period of 5 years with experts and industry leaders from across the world to be roped in to execute this project. Nazara announced that a special focus would be given towards developing players and talent from a grassroots level via tie ups with universities to offer specialized courses. The reported format was to have two seasons in a year with 6 teams participating. Dota2 and CS:GO were to be a part of the regular seasons.

None of this has come to fruition in 2017 nor have we seen any follow up announcements after the initial one, which leads us to the assumption that preparations have been made in stealth mode behind the curtain in year 1 of their 5 year plan.

Gadgets.ndtv reported in February 2017 that League of Legends studio Riot Games had set up operations in India. At the time of writing this, the official Riot Games website lists an office in Gurugram Delhi with 10 open positions ranging from Brand Managers and Social Media Specialists to Infrastructure Managers and more.

Speculation was ripe that their India operations would kick off with India servers however mum’s the word for now as no public announcements have been made about Riot Games’ India plans just yet.
Summary

2017 has truly been a phenomenal year for Indian esports organizations. The industry has entered an era of consolidation where likeminded giants are teaming up to make great things happen. Indian esports intermediaries, platforms and service providers continue to display sustained growth. Among other developments, CS:GO platform provider SoStronk has hinted at launching its coveted anti cheat and has kiocked off a pseudo pro circuit via SoStronk next.
AFK Gaming will expand its content creation activities both horizontally across game titles and vertically across regions.
Teams are looking beyond Indian borders to fuel their growth with Entity Gaming picking up international rosters across a multitude of games.
The former Entity Gaming CS:GO roster took a game off Mineski at an international LAN while Signify's current roster has qualified for two international LAN tournaments in early 2018.

The year witnessed its fair share of troughs as well with NovaPlay.in – the organization behind the SuperNova event and the Alpha Gamer program, going dormant. A similar situation plagued Drag2Death – once a CS:GO server operator, tournament organizer and an aspiring platform /community portal.

The Indian esports growth spurt is showing no signs of slowing down in 2018 either with a multitide of deals being signed behind close doors. Stay tuned for some exciting announcements over the coming few weeks starting with the India Gaming Show Bangalore.

If you have any feedback, requests, questions feel free to send them to me on Facebook or Twitter. If you'd like to get in touch with AFK Gaming hit us up at contact@afkgaming.com.
Check out last year’s edition of this article HERE