Winter is coming in Call of Duty: Mobile (CODM). The Season 13 update brings a lot of winter-themed content to the game along with a new battle pass called “Winter War.” This free Battle pass rewards include the new scorestreak EMP System and the Peacekeeper MK2.

RELATED:  How to Get CODM's Ghost Stealth Character for Free

The battle pass has both the free and premium versions. The Premium Battle Pass includes all the free version’s available rewards and new epic characters and weapons.

The premium battle pass contains around 50 tiers of content. This includes new winter-themed operators and weapon blueprints to collect.

The epic characters obtainable in the Premium Battle Pass are as follows;

New epic weapons are also available when you purchase the Premium Battle Pass;

Reaching Tier14 unlocks the scorestreak, EMP System. This scorestreak disables electronics and even enemy scorestreaks for a shot time. You can even disrupt enemy HUDs if they haven’t equipped the Hard Wired perk. 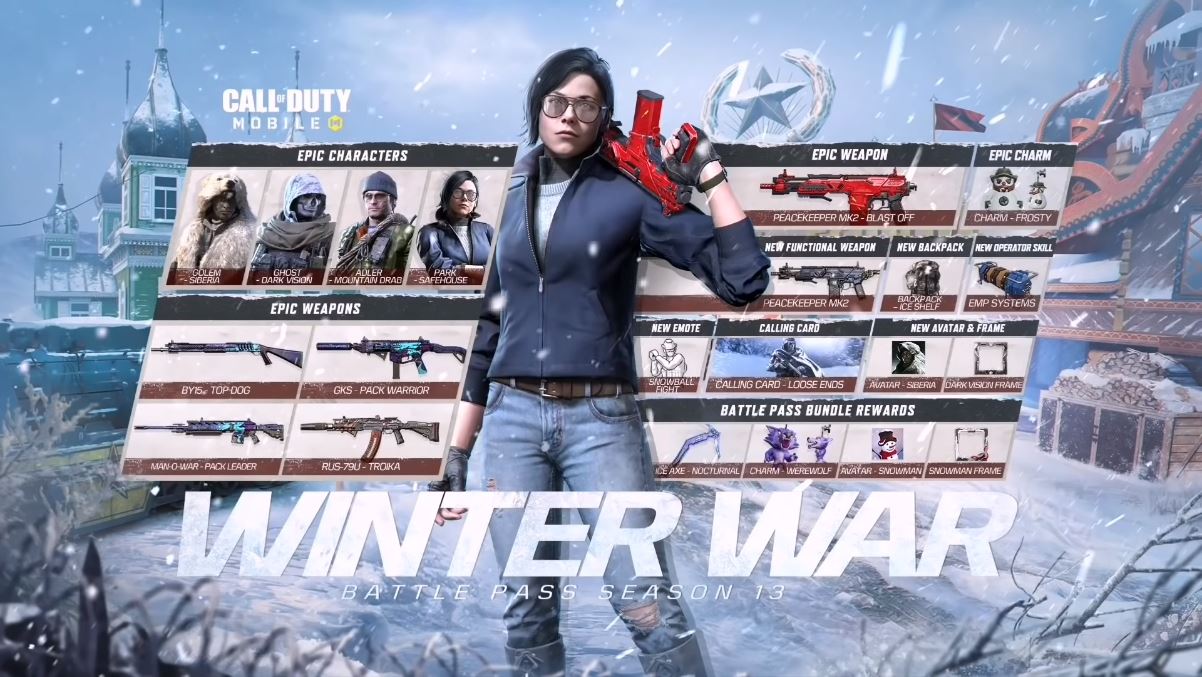 On top of the Battle Pass, there is also a new game mode called “Grind,” which will be available next year in January 2021. What better way to celebrate the holiday season than a new game mode for CODM? The popular game mode from Call of Duty: Modern warfare is making its way into mobile. The “Grind” is a combination of Kill Confirmed and Hardpoint to introduce another creative game mode.

Teams of 5 members will collect dog tags from fallen players and transport them to specific locations around the map to earn points. The first team to score 60 points wins the match. Every round has a time limit of 10 minutes. If the timer runs out, the team with the most points wins.

Dog tags collected will drop if the player dies while delivering the dog tags to the set locations. Teamwork is crucial to ensure everyone gets to deliver their dog tags safely.

RELATED:  CODM: Fennec Nerfed, Along with Other Adjustments for Guns

Upcoming Event: On the Brink

A new event is also being teased along with the new battle pass and game mode. Certain missions will be given, and completing them gives you rewards like rare, uncommon, or even epic items.

Details are yet to be announced. It is speculated that it will arrive on December 26, after the Christmas holidays.