The 4 Chinese Teams to make it all the way to the Regional LAN Finals for eXTREMESLAND 2018 were declared yesterday, on the Official Website.

The 4 Finalists will now be moving onto the Regional LAN Finals scheduled to be held on 8th-9th September, offering a Prize Pool of ‘57,500 CNY’ along with the top 2 Teams qualifying for the Shanghai Finals where they will compete for a prize pool of ‘$100,000’.

Let’s see how it all went down on the way to the ‘Final Four’.

The Chinese Qualifier kick-started with an Open Qualifier which saw participation from 33 Teams. These teams fought it out over a course of 5 Days from 1st-5th August playing a BO3, Single Elimination Format.

After plenty of action-filled matches consisting of innumerable clutches, rushes and defuses, the 8 Teams to make it through were:

WNV, New4, Dynasty, LynnVision and IMBA.SAS were the teams among the ones that qualified that were surely predicted to make it through to the Closed Qualifiers based on their repertoire and past performances.

The Closed Qualifiers were heavily contested between the 16 Teams, taking place over a span of 4 Days from 9th-12th August following a BO3, Single Elimination Format. The 16 teams were equally distributed between DI Teams and Open Qualifier Teams.

The 8 Direct Invites were:

TyLoo & MFC were not able to participate in the qualifier due to a conflict in dates with that of a major tournament and because of disbandment of the team, respectively.

After the RO16 Bracket was drawn for the Closed Qualifiers, New4 & t3Kipper were drawn as the two teams who would directly qualify to the next round, on the account of the Two DI Teams withdrawing from the tournament.

The RO-16 Bracket was as follows: 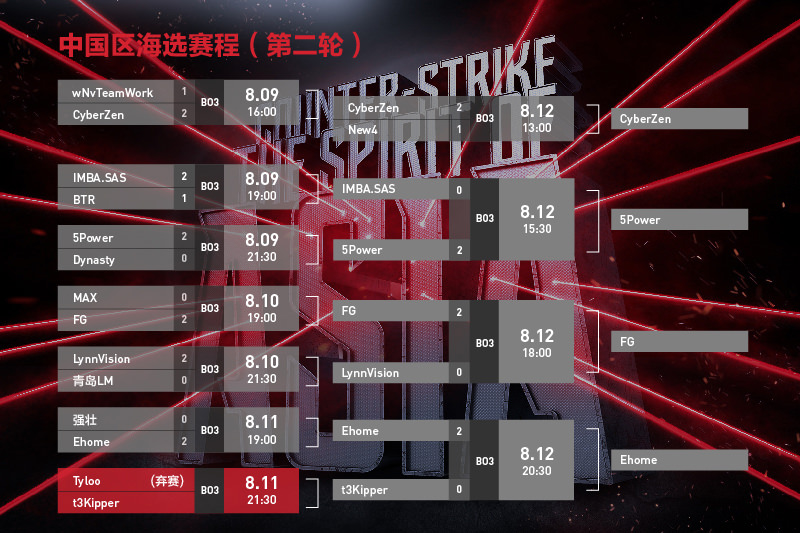 Stay tuned as we proceed with the Regional LAN Finals shortly, followed with the Main Event to be held in Shanghai.

For more information on the tournament go to 'ZOWIE eXTREMESLAND 2018'.