Today 24th August marked the start of the ZOTAC Cup Masters 2018 being held at the Hong Kong Convention & Exhibition Center as part of the Esport & Music Festival.

The day featured four BO3, single elimination brackets which would lead to four teams getting knocked out of the tournament while the other four will move onto the semifinals. 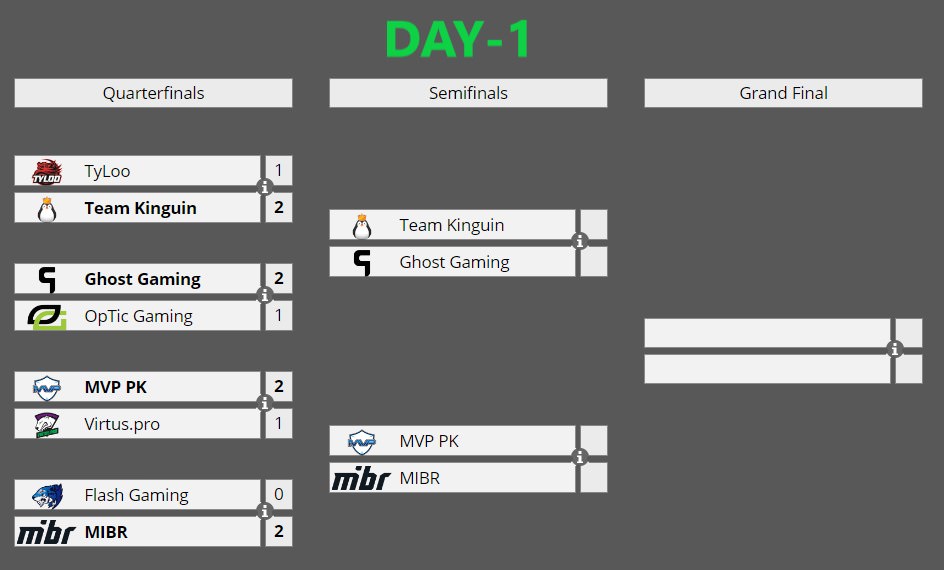 TyLoo Falter To The Poles

TyLoo faced off against Kinguin in the opening series of the tournament. The first quarterfinal was very closely fought with the first two matches ending with similar scores of ‘16-14’ on Mirage and Overpass, won by TyLoo and Kinguin, respectively.

The decider match between them was fought on Train which was won by Kinguin quite easily. The Poles had managed a huge lead at halftime with the score reading ‘11-4’ & kept piling up rounds to finish the match ‘16-9’.

Taking the series ‘2-1’ Kinguin moved ahead into the semifinals while TyLoo was eliminated from the tournament.

Ghost v/s OpTic was the highlight of the day. Coming in as the underdogs in this match-up almost everyone favoured OpTic, expecting them to cruise through to the semifinals but an incredibly dominant performance by Ghost just demolished the green wall to rubble.

The first and the second match was won by Ghost and OpTic on Nuke and Overpass, respectively. Both the matches were secured by the winning teams quite comfortable with scores reading ‘16-8’ & ‘16-7’. But it was the decider that completely shattered OpTic, this match will haunt OpTic for a long time as Ghost defeated them in an overwhelming manner with a score of ‘16-2’, completely shutting them down while outplaying them in all aspects of the game.

Taking the series ‘2-1’ Ghost moved ahead into the semifinals while OpTic was eliminated from the tournament.

MVP PK Brush It Past VP

The third quarterfinal of the day witnessed MVP PK square off against VP. Again, going down to a decider the first two matches were won by MVP PK on Inferno with a score of ‘16-13’ followed by VP on Dust 2 with the score reading ‘16-5’.

The final match was played on Mirage and was a pretty one-sided game until halftime but the latter half saw VP close in on the gap but not enough to win them the match, which went to Koreans with a score of ‘16-11’.

Taking the series ‘2-1’ MVP PK moved ahead into the semifinals while Virtus. Pro was eliminated from the tournament.

MIBR Too Quick For Flash

The last quarterfinal of the tournament was the only clean sweep of the day, coming off MIBR against Flash. MIBR settled the series with 2 really quick matches. The first match was played on Inferno which MIBR won with a score of ‘16-3’ while the second was played on Cache resulting in a victory for MIBR as they finished the game within 17 Rounds.

A terrible washout for Flash and one of their worst losses ever as MIBR made quick work of them with clean, precise gameplay.

Taking the series ‘2-0’ MIBR moved ahead into the semifinals while Flash was eliminated from the tournament.

This brings us to the end of the first day as TyLoo, OpTic, VP & Flash are eliminated out of the tournament while Ghost faceoff against Kinguin & MVP PK prepares to take on MIBR in the semifinal brackets, scheduled to take place on the second day of the tournament i.e. 25th August.

Stay tuned to get all the updates from the second day of ZOTAC Cup Masters 2018.

Catch the live stream on twitch at https://www.twitch.tv/zotac_cup