IEM Sydney 2019 which started today is Intel Extreme Masters third successful venture in Australia. The event first took place in Sydney in 2017 and has since been returning to the country year-after-year.

Though the event is massively popular in the country with quite a fan following, there are still some problems that are beyond IEM. Yes, even this time around the Visa problems have arisen, though they are specific to a few players and have not been a hindrance to any talent or team, they still persist.

The first team to fall victim to the visa problem was the German representatives, BIG. Their star player Ismailcan ‘XANTARES’ Dörtkarde? could not travel with the team as he faced some last minute visa issues.

Due to XANTARES not able to receive his visa on time, BIG thought of picking up Owen ‘smooya’ Butterfield but this was not feasible due to ESL’s rule which states that,

“A player can only join an IEM participant if he has not represented any other team in ESL Pro Gaming competitions over the last 120 days.”

So the team went ahead with Nikola ‘LEGIJA’ Nini? as their fifth. LEGIJA has previously stood in for the side at the ESEA MDL S27 - Europe Finals, Qi Invitationals and MDL Global Challenge.

The German squad for the Australian event is as follows,

Initially, FaZe Clan had announced that two of their players Nikola ‘NiKo’ Kova? and Dauren ‘AdreN’ Kystaubayev will be missing out on the first day of the event due to both of them facing some visa issues.

Due to this last minute change their coach Janko ‘YNk’ Paunovi? along with Karlo ‘USTILO’ Pivac had to stand-in for the side.

#IEM: Due to Visa issues @YNk & @USTILO will stand-in for @fazeniko & @AdreNcs for the first game at IEM Sydney.

As of today, AdreN will be making his way to Sydney as he obtained his Visa yesterday but NiKo will definitely be missing out the second day and possibly the entire event as his visa issues have not been resolved yet. 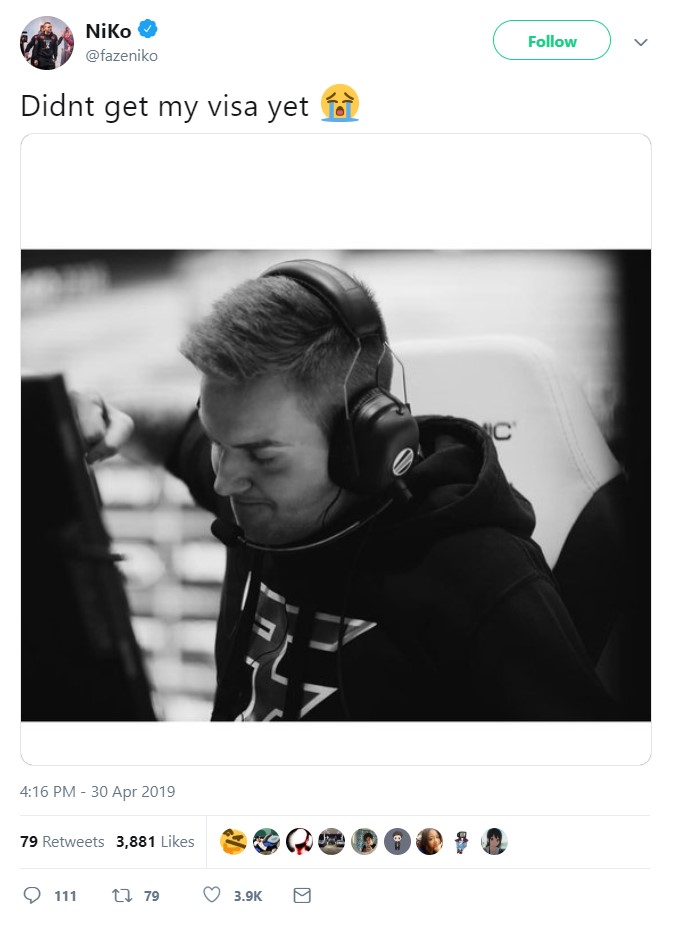 It is possible that the issues might have occurred due to the players themselves and is not the fault of the Australian management. But apart from these issues, the event itself is playing out beautifully with the Australians coming out in large numbers to show their support to all the participating teams.