Which CS:GO platform should you be playing on?

Forsaking his own dreams and ambitions while denting the character and ethics of a CS:GO community still in its infancy, the antics showcased by Nikhil ‘Forsaken’ Kumawat brought forth a lot of disgust upon India as he successfully committed a suicide of his career.

With the dust settled down around the whole debacle I would like to revisit this one discussion where many flamed SoStronk of not being able to detect Forsaken’s use of illegitimate software due to an ineffective anti-cheat client.

Although there is no solid proof against Forsaken using hacks while playing on SoStronk it still intrigued me to pay a visit to other such famous platforms and compare their anti-cheat clients. Not being able to understand much about the software and after wasting my tech friend's invaluable hour or so, I went ahead and compared the platform on the basis of a few simple to understand parameters so as to help out other fellow gamers make an informed decision and help curb the use of word.exe.

Let’s dive right into the discussion to see who takes the pedestal. I will be comparing FACEIT, ESEA and SoStronk across the below-mentioned parameters, rating each one of them on a scale of ‘1-5’. 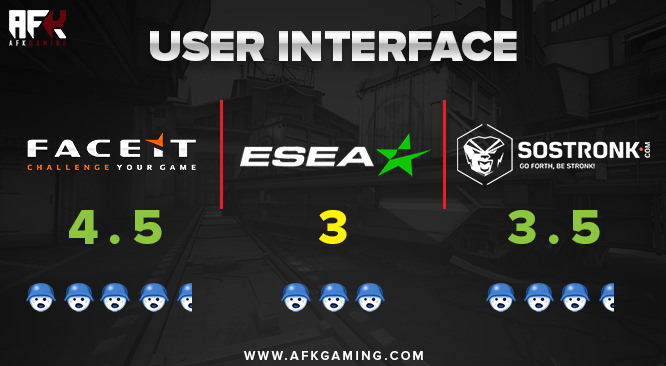 FACEIT has a very intuitive and user-friendly interface. Criticized pretty heavily in the past for its uber confusing and difficult to navigate website, the platform has really stepped up and done a fabulous job by overhauling its UI.

ESEA looks like a website from the ’90s. No, there is nothing wrong in having a simplistic look but everything about it is way too vanilla for the likes of this time and age. It is responsive and sober but I don’t think it is all that attractive. In my opinion, it could really use a design upgrade because most of the people do judge a book by its cover.

SoStronk has invested quite heavily into its UI. It is the only platform that has a lot of character graphics being used on its website. It will surely capture your attention while being easy to navigate and understand but it is not too smooth when it comes to its operational capabilities, as the platform still suffers from quite a few bugs, page breaks, etc. Hopefully, this aspect will get better with time as well. 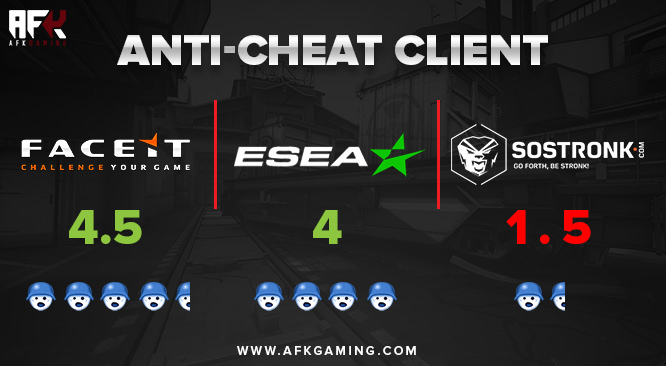 FACEIT has one of the best anti-cheat clients in the world. It implements top of the class behaviour recognition systems that constantly track and analyze game data from all its users. Over the years it has successfully created a great database which further improves its efficiency in the tracking of malicious and illegal use of external software and hacks.

The anti-cheat system constantly evolves by adopting the latest encryption technology while all of its drivers are certified by Symantec & Microsoft, ensuring the best possible service towards its users.

ESEA has adopted an anti-cheat client which is no less both in terms of effectiveness and efficiency. The client protects the privacy of its users by monitoring only those activities that take in and around their supported games.

ESEA has deployed an ‘Always On’ feature with their anti-cheat client which works similar to an anti-virus software by running in the background while analyzing all the available data.

SoStronk being a young platform has recently invested in an anti-cheat client as these software's can be quite expensive. They have named their anti-cheat program, Odin which is still undergoing beta-testing.

It is obviously nowhere near the quality of the anti-cheat clients used by its competitors but it is steadily growing with the help of the community, for the community. 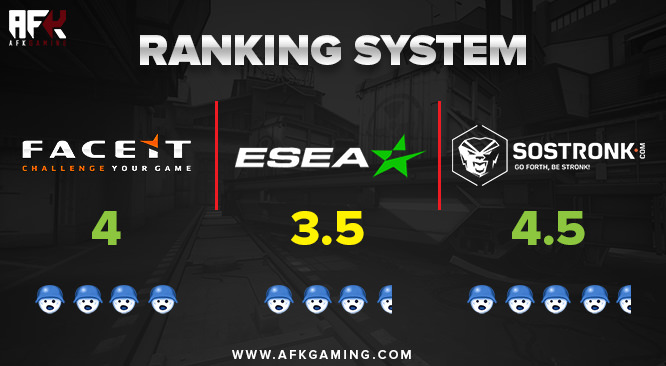 FACEIT calibrates a user's rank based on the ELO system. They have a range of ranks from 1-10 with 1 showcasing the least amount of skill as it increases towards 10. The ELO of a user increases or decreases depending on whether they win or lose their matches.

ESEA requires its players to calibrate their initial rank by playing at least 10 matches after which the rank increases or decreases based on a constant overall evaluation of the user's performance. ESEA ranking increases from the lowest possible rank as follows:

SoStronk incorporates the Glicko 2 Rating Mechanics for the assignment and growth of a user's rank. The rating mechanics are an advancement over the ELO system, making it more effective and accurate. SoStronk ranking increases from the lowest possible rank as follows: 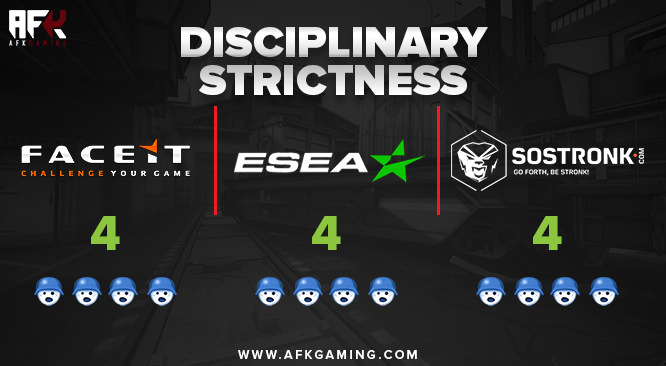 An excellent work is being done on this front by all the three platforms. They are punishing the players well enough depending on their actions. The basic punishments which involves skipping a pug match or going afk in-between a match is pretty much the same, involving time-based bans that keep increasing with repetitive similar mistakes.

The more serious issues like usage of third-party software's or racist remarks used in-game leads to more serious punishments being delivered by the platforms which include getting banned from matchmaking for a long period or in some cases complete ban from the platform itself.

The support team is doing an excellent job keeping pace with the constant complains that are registered while delivering instant punishments wherever applicable. 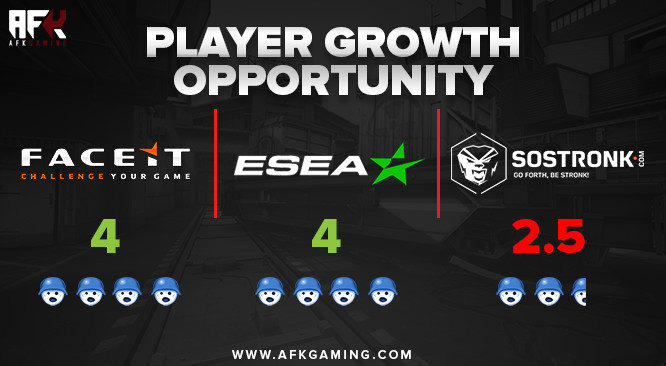 FACEIT offers weekly and monthly ladders to participate in along with monthly leagues and tournaments. It also provides an opportunity for players to turn pro through dedicated events like the FPL Challenger and the FACEIT Pro League.

ESEA has these things called Clubs which are owned by various selective users that organize daily and weekly competitions for the users. Daily ladders and regular events keep taking place along with special leagues that provide an opportunity for players to turn pro.

SoStronk hosts these daily skill-based games for players to participate in. Along with this, it operates a regional leaderboard with three different tiers; Free, Silver & Gold. The player who tops the gold leaderboard every month is directly invited to join SoStronk Next, which is a league limited only to the pros to play in and is looked after by CSGO2Asia along with an elite player of councils. 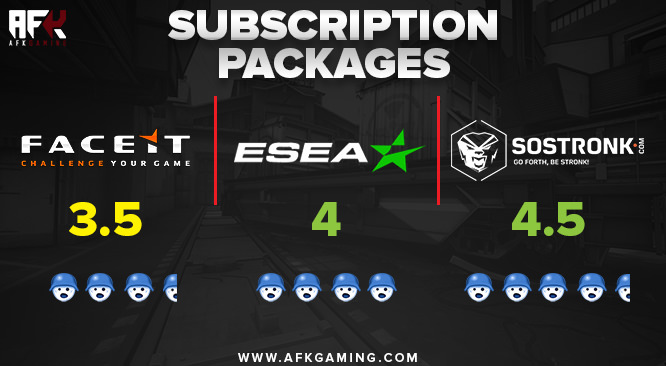 FACEIT is quite expensive with its subscriptions while offering a choice between purchasing a Premium or a Game Specific Package. Following are the various subscription it offers:

ESEA is more pocket-friendly with its subscriptions while also having a very convenient way of purchasing one through the Steam Store. The Premium package has the following subscription offers:

SoStronk offers the cheapest subscriptions amongst its competitors while also having a lifetime subscription up for grabs, something which no other platform offers.

FACEIT provides the largest community of players for users to engage with. Although the community might not be completely free of toxicity, it still provides the best exposure in terms of skill development and a great path to anyone looking to turn pro.

ESEA has some features which have impressed me big time. They have a feature called ‘Status’ through which the users can check if everything is running smoothly on the ESEA servers or not, if any problem is being fixed it will be logged and mentioned under this section.

Another really great feature is the addition of the ‘Bug Bounty’ program which enables freelance programmers or debugging enthusiasts to test the integrity and functionality of the platform, bolstering its security.

ESEA adopts a Karma System similar to the one implemented by Reddit. This is really helpful in ensuring a positive community growth while curbing the toxicity level within the community. This is how the karma system affects a user on its platform:

SoStronk is the only platform where I have come across the concept of ‘Hall of Shame’ which is definitely a great addition to this upcoming platform. It is further divided into ‘Suspect List’ and ‘Ban List’.

The suspect list gives information about the players that have accumulated a lot of reports due to various reasons and are on the verge of getting banned. The ban list, on the other hand, gives information of those users who have received bans along with the reason for which they were handed out the ban.

Accumulating all the ratings together this is what the numbers have to say, 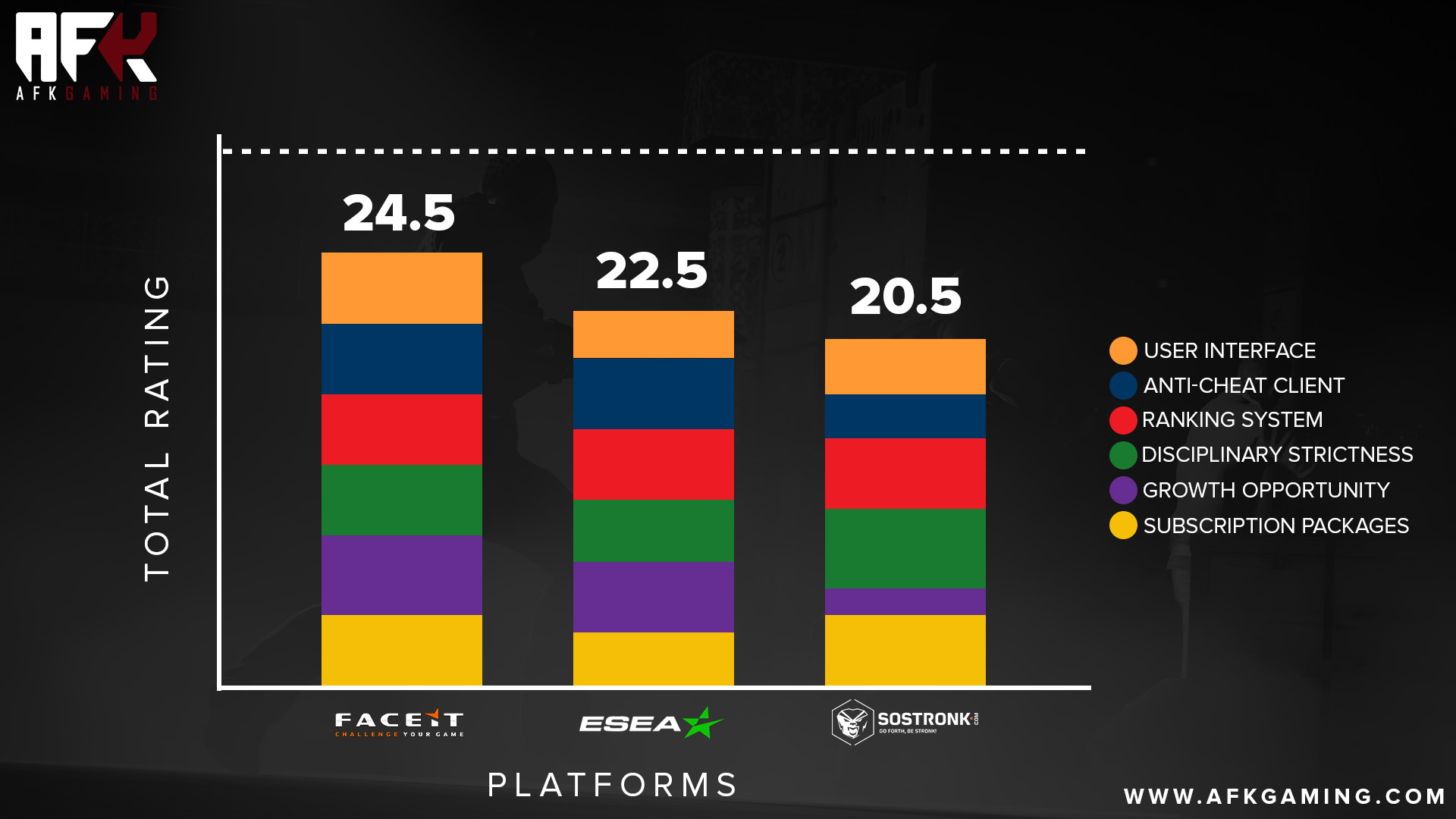 According to this, FACEIT is the best possible platform which is very closely followed by ESEA and then comes SoStronk trying its best to close in on the gap.

But in all honesty, a player should choose a platform that suits their own needs. If they want a platform for regular practice which should be light on their wallets, the best option is to go with SoStronk. If they want to experience great games while engaging with the community and are serious towards improving their skills ESEA and FACEIT are both great options with the former being more economic than the latter.

The region a user belongs to also plays a significant role in choosing their platform. ESEA has dominance in North and South America along with the Oceania region whereas European countries along with the Russian, African and the Middle-East regions prefer to play on FACEIT. SoStronk has a strong presence in Central and South-East Asia. These demographics play an important factor in decision making as well.

Finally, reaching the end of a rather long article. Anyone reading this will certainly gain perfect clarity upon what to choose and will make a more informed decision when selecting their gaming platform.