Most conversations about the esports industry revolve around the positives - the love and passion for the game, the astronomical prize pools and viewership, brand-friendly demographics etc. However, the industry isn't all glamour and glory. The amount of money and viewership that the industry commands today give rise to new problems - the likes of which the traditional sports industry has learned to tackle on a regular basis.


VPGame is a betting and trading website that lists Dota2, LOL and OW matches. The ownership is primarily Chinese and as per their website, VPGame is the sister organization of the renowned LGD-Gaming Club.


In what seems to be a clear case of match-fixing a VPGame admin has been spotted offering a well known SEA team some perks to throw matches. AFK Gaming has acquired these screenshots from the manager of the said organization but we will be keeping their names anonymous out of respect to the org. It’s unlikely that they were the only SEA team to be offered the same deal either as it seems to be part of a bigger scam. The approach taken by the VPGame employee whose Skype ID is VPGame.Juntao, is to tie up with a local SEA contact who gave him a list of tier 2 SEA teams competing in tournaments such as the JoinDOTA League and the PD Cup. Whether this other person was also part of the scam is inconclusive.

The SEA contact reached out to the team via their Facebook page and put them in touch with the admin on Skype. The Skype conversation is pretty self-explanatory. Screenshots of both conversations as received from the team are as below. 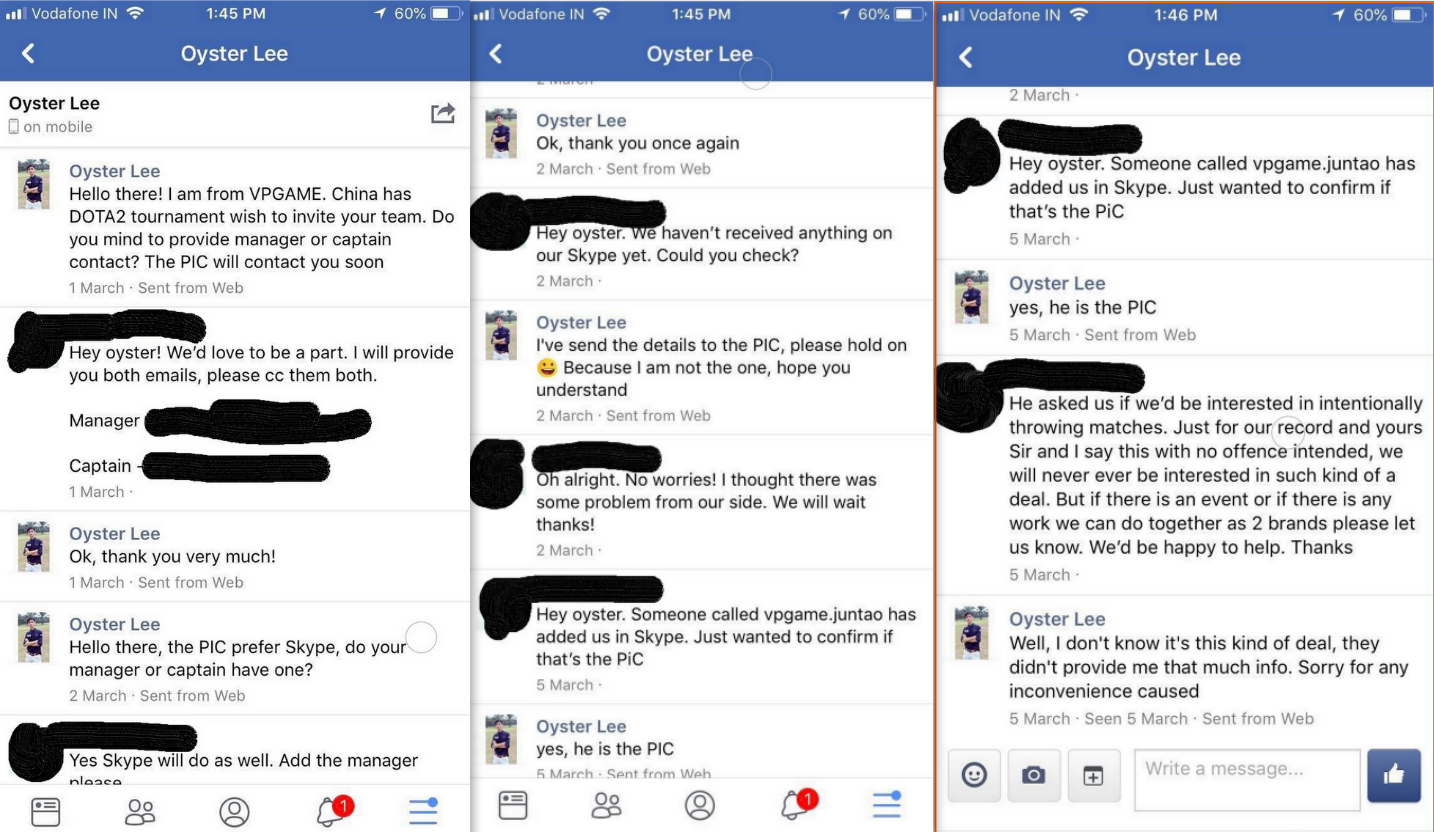 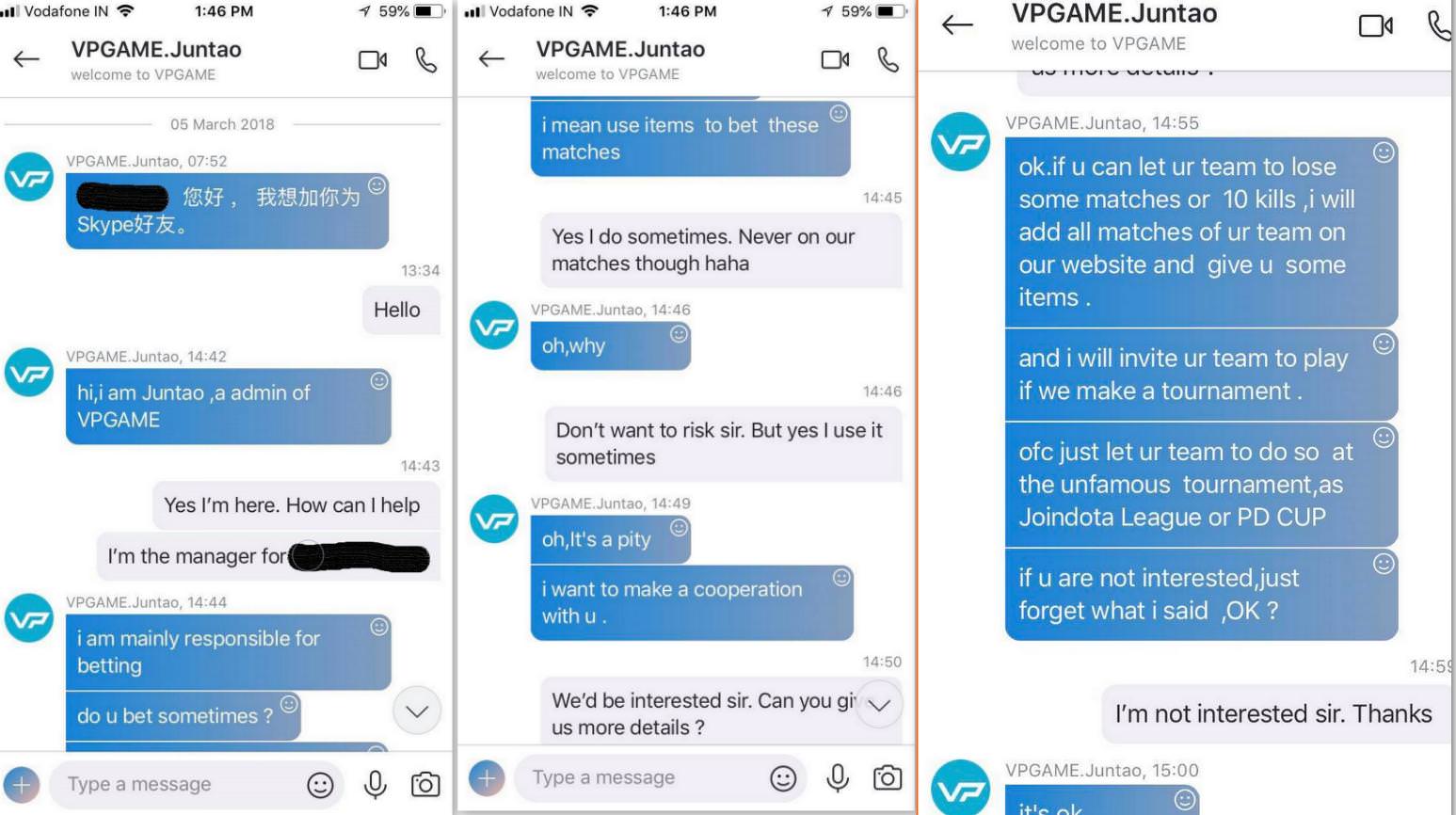 Verification of the IDs


Many scammers often pose as admins and officials with fake ids so it was necessary to ensure that these were indeed legitimate IDs. After posing as potential clients AFK Gaming contacted the admin (Juntao) who put us through to his colleague (orenji) and we can confirm with relative confidence that both members are a part of VPgame. However, the match-fixing part of the incident has only been initiated by the admin whose ID is VPGame.Juntao. 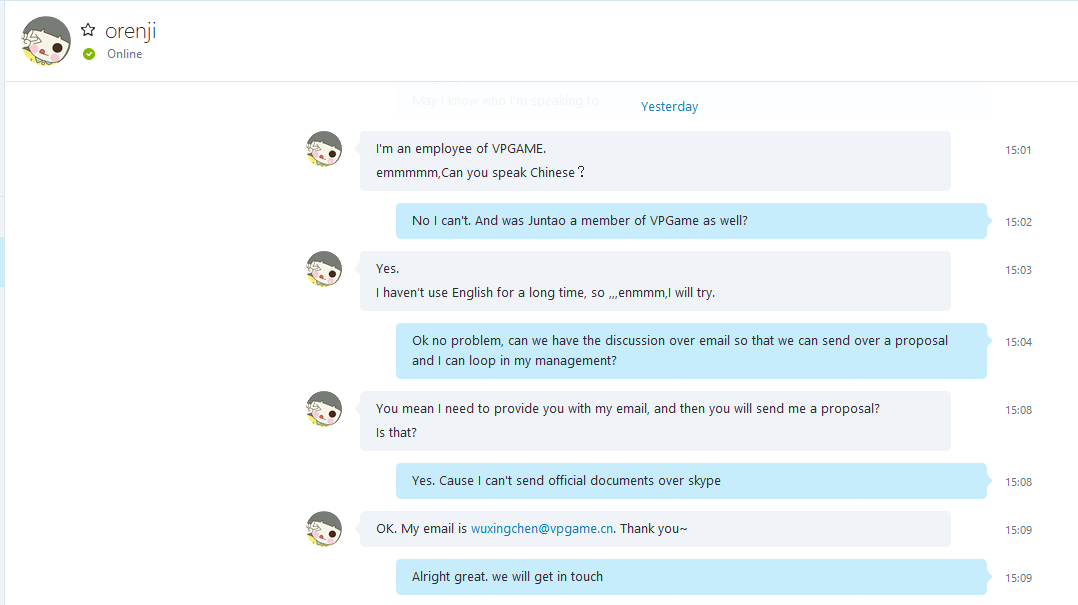 At a time and age when the community is trying to bring legitimacy and professionalism into the entire esports scene, these types of incidents leave a sour taste in everyone’s mouths. Kudos to the team in question for not succumbing to greed. Across the history of Dota, quite a few incidents of match-fixing have come to light. The now memed Solo 322 incident comes to mind almost immediately.

However, the more serious offences include the Arrow Gaming scandal in 2014 and an incident involving Elite Wolves in 2016. All players involved in both incidents have been indefinitely banned from Valve events. More recently, in 2018, Chinese teams, Ulrica and Rock.Y were caught in a match-fixing scandal in the Dota 2 Professional League.