ViCi & Tyloo in the lower bracket as MVP & B.O.O.T-d[S] qualify onto the upper bracket finals

The Asia Closed Qualifier for ESL One Cologne 2019 started today with 8 teams participating in the event. Out of the 8 teams, 4 teams were direct invites while the other four made their way through the two open qualifiers.

The 8 teams took on each other in a double elimination bracket with all the matches following a best-of-three format with the exception of the Grand Finals that will be a best-of-five series with the team from the Upper Bracket having a one-match advantage.

While MVP PK and B.O.O.T-d[S] dominated the Upper Bracket making their way to the finals, BTRG and Recca had to depart from the event following their Lower Bracket loss.

This is what the bracket looks like at the end of the first day, 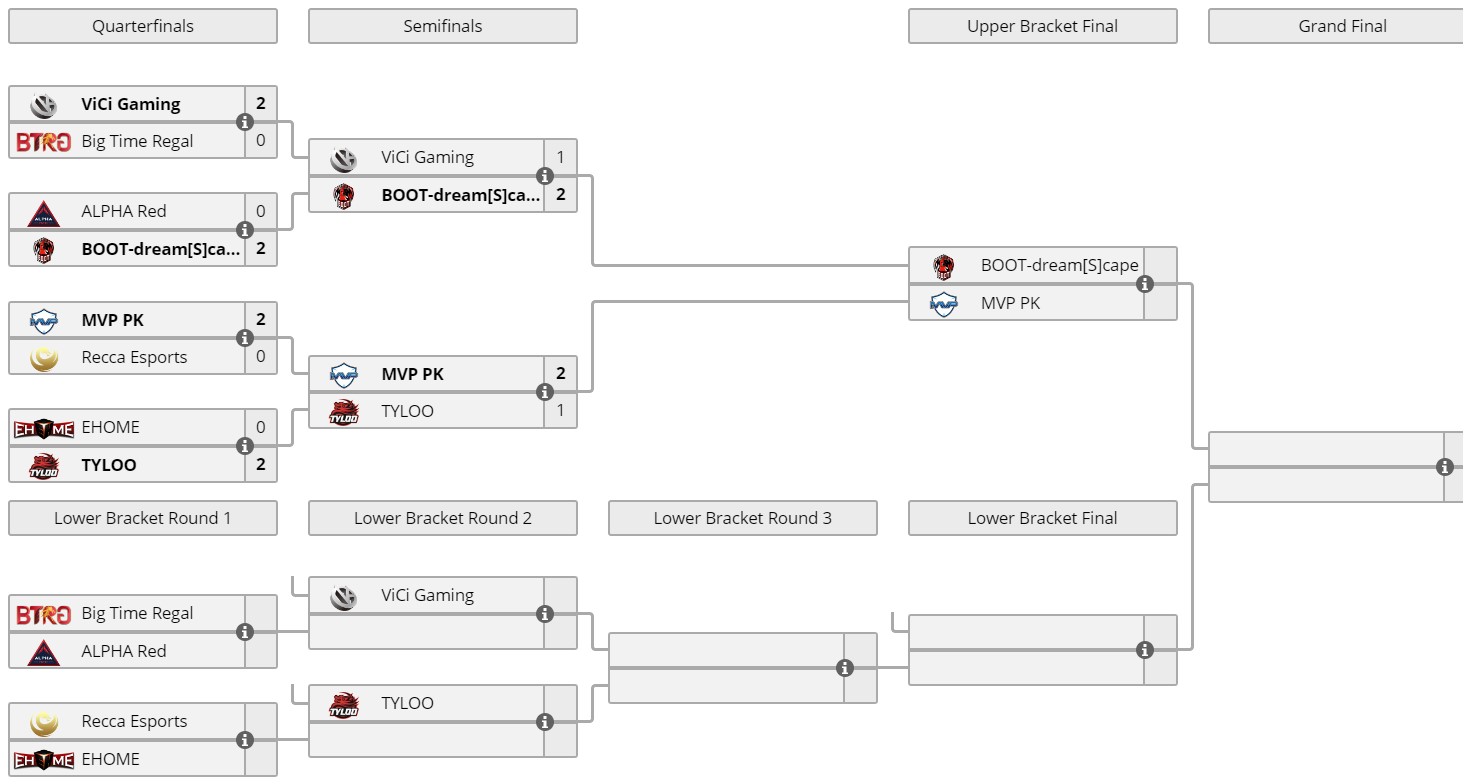 The Koreans had a great day as they reached the Upper Bracket Finals after defeating Recca Esports and Tyloo.

Recca was not much of a competition as MVP PK made quick work of them on Mirage followed by Overpass. Recca could only manage to win a total of 14 rounds as both HSK and XigN hit them hard taking MVP to the next round.

MVP did not start all that well against Tyloo losing out on their own map pick, Train, by a score of ‘16-13’ but the Koreans kept at it taking the game into a decider after winning on Mirage.

Inferno was a quick sweep for MVP as Tyloo could not break through the tight defence set up by MVP. Though Tyloo went on to win the second pistol round, all hell broke loose as MVP won seven rounds in a row to take the match and the series.

We've defeated @tyloogaming with 2-1 in ESL One Cologne 2019 Asia Closed Qualifier semifinals.
Thank you for your cheer!
See you tomorrow!

B.O.O.T-d[S] will be facing against MVP PK in the Upper Bracket Finals tomorrow as they take down Alpha Red followed by a down to the wire face-off against ViCi Gaming.

ViCi playing with a sub in place of Freeman but still looked strong as they beat BTRG in a dominant fashion to face off against B.O.O.T-d[S] who were also coming in off a hot win streak against Alpha Red.

Both B.O.O.T-d[S] and ViCi dominated each other on their own map picks, Nuke & Mirage, respectively. Down to a decider, the match went into overtime on Dust 2 as B.O.O.T-d[S] handled the pressure well and came out victorious with the scoreboard reading ‘19-16’ in their favour.

After falling down to the lower bracket the race for survival took place between four teams, Alpha Red & Ehome were the ones that moved ahead taking down their opponents BTRG & Recca in relatively easy match-ups.

With this, the first day came to an end as we have some exciting matches set up for tomorrow. With both the top Chinese teams in the Lower Bracket which teams will face off in the Grand Finals?