The first day of the StarSeries i-League Season 7 has been quite something. There was definitely a lot of CounterStrike action but nothing disruptive or unexpected took place except for ViCi taking down Na’Vi followed by an intense match-up between Fnatic and NiP.

NRG, ENCE, FaZe, Renegades, Fnatic, MIBR, Vitality & ViCi Gaming were the teams who came out on top at the end of the first day. 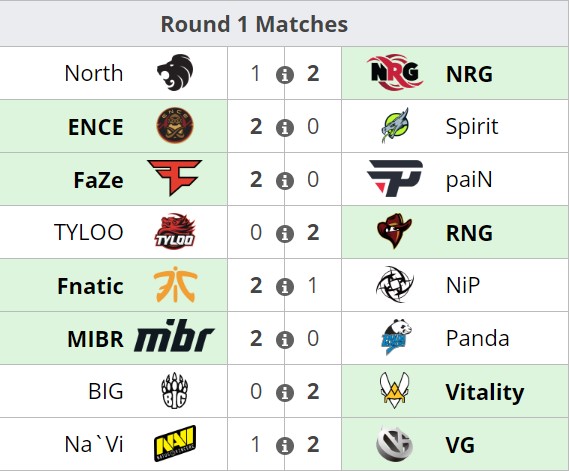 Tyloo made a massive effort to take a map against Renegades but couldn’t manage to walk away with anything.

Tyloo really gave it a good swing on the first map Inferno, coming back from a deficit of 11 rounds, Tyloo made a terrific comeback but choked out towards the end as the Aussies claimed map one.

The following match took place on Dust 2 where another valiant effort by Tyloo resulted in nothing more than a last effort sweep by Renegades.

Panda Off To A Slow Start

Panda Gaming was no match for a solid MIBR who looked strong, confident and in-character to make a statement. After back-to-back disappointments at Katowice and WESG 2019, the team will be looking ahead to claim the trophy more than any other team.

ViCi With The Moves

ViCi gave a solid performance on Inferno, burning down Na’Vi to a perfect crisp. ViCi had a phenomenal CT-side which converted well into an equally dominating T-side as they took down Na’Vi by a score of ‘16-3’.

Na’Vi responded in full on Train demolishing ViCi by a score of ‘16-6’. Both Electronic and S1mple stepped up to claim the match for their side and took it to a decider on Nuke.

Nuke had ViCi written all over it as the Chinese team hunted down Na’Vi. ViCi took a healthy lead playing as CT and after a slow start in the second half claimed six rounds in succession to take the series ‘2-1’ in their favour.

A massive upset by the Chinese teams who are the highest rated dark horses in the event, they were expected to disrupt a few match-ups and they have proven that they are a force to reckon with.

.@VICI survive marathon vs @natusvincere to earn their first victory in the tournament!#csgo #cssltv #StarSeriesS7

Apart from this, the three-match series between Fnatic and NiP was quite a nail biter, keeping everyone on the edge of their seats till the final round of the final map. Though Fnatic was able to claim the series it was NiP claiming all the applause for a daunting show of some fierce CounterStrike.

.@FNATIC conquer @NiPGaming in a VERY CLOSE game to secure a 1-0 record at #StarSeriesS7!#csgo #cssltv

North and NRG had quite a faceoff with NRG waking away with the win. Faze also had quite an easy time taking down paiN in two back-to-back matches. ENCE took a comfortable ‘2-0’ win over Spirit. The final match of the day observed Vitality stand victorious over BIG.

That is all the action from the first day of the event, stay tuned for more as we move on to the second day of the Group Stage tomorrow!

The matches can be streamed live at the following links,