The BO3 series went down to the wire with some great matches being played between the two teams. This is what led to the final result.

Race For The Third Slot

The first match between the two teams took place on Dust 2 where MVP PK showed a single-sided dominance over their Chinese adversaries. After facing tough contention from ViCi in the first half of the game, MVP came back strong to shut down ViCi with superior T-sided executions that led them to win the first match with a score of ‘16-8’.

The final decider was played on Cache where both the teams charged head-on without a hint of fear or doubt in their abilities, as both of them brought forth their best game to take the match into overtime. It was at this point that ViCi executed some brilliant plays which resulted in them taking the match away from MVP with the scores at ‘19-16’.

With this, ViCi Gaming takes the first Chinese slot and move on to the ESL Pro League – Asia Playoffs while MVP PK still retains a chance of making it to the same stage fighting through the lower bracket. 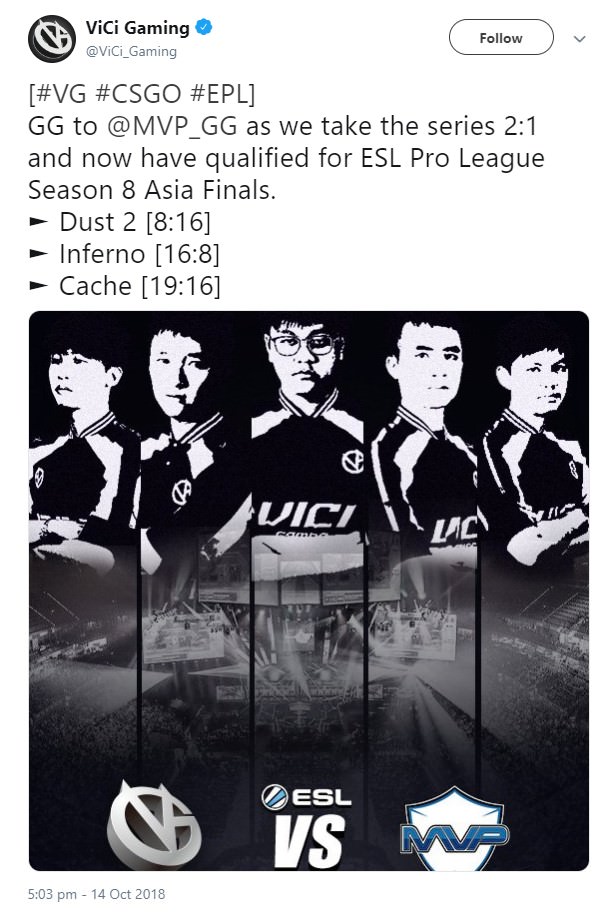 The ESL Pro League – Asia Playoffs will witness the winner qualify for the ESL Pro League Odense 2018 which will be held in Denmark this December. With Lucid Dream, OpTic India and ViCi Gaming already occupying three of the four available slots, let’s see which team grabs the last remaining spot in hopes of qualifying for the major.