Over the last few days Valve has received a lot of complaints through reddit and other prominent fan forums, regarding drop rates for Immortal Treasure III. While Steam support first claimed that there were no bugs, Valve released a post yesterday saying they had found one affecting the drop rate. 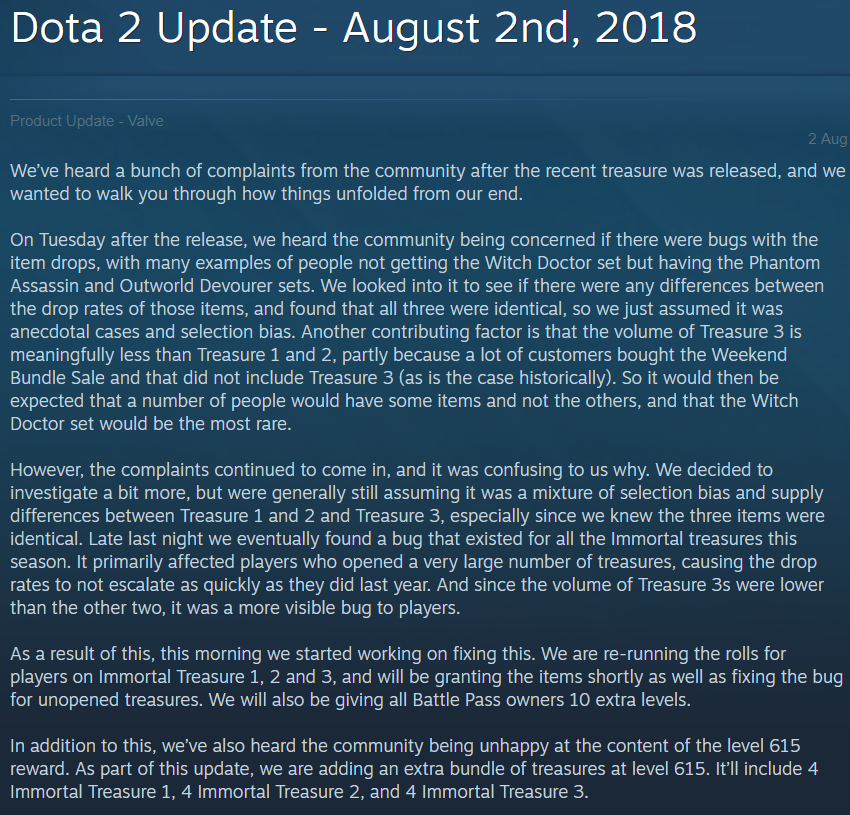 And so there it is. There actually was a bug that caused the drop rates to not escalate as quickly as they did with last year’s treasures. So, what will you be getting as compensation for this issue?

Valve has re-ran the rolls for all three Immortal Treasures and the next time you log into Dota 2, you will be granted the extra items (if any) you should have received. Furthermore, you will also get 10 extra Battle Pass levels for your troubles, but that’s not all. Valve has also upgraded the level 615 reward in response to the community being unhappy about it. Therefore, you will be getting 4 extra of each Immortal Treasure when you log in and if you have a Battle Pass of 615 and above.


One thing about Valve is that they’ve always been good at accepting flaws in their product and rectifying it promptly. While the communication between the company and the player base is something they can definitely work on, they took full responsibility. Admitting there's a bug in your code and re-rolling all treasures isn't something every developer would do (*cough* EA *cough*).

Hopefully, this will be the last of the bugs, to help Valve focus on making TI8 an epic memorable event.
About UsContact UsServicesRSS
DisclaimerAdvertise With UsArchiveEditorial Team