U Cypher Diaries – Veewake and ClouDx give their take

9th, Jan, 2018
With just 20 days left for U Cypher to premiere, we got 2 of India’s top Dota 2 casters and coincidentally AFK Gaming’s own Veewake and ClouDx to share their thoughts on the show. Both of them have been an active part of the show, having casted all the Dota games and been on the set when the series was being shot. Let’s see what they made of it.

While Veewake comes from a film background, for Nishant it was the first time on a big set. He says that it was a new and fresh experience, something totally different from all the times he’s cast on stream or even casting Dota at some of the premier LAN events. Even for Veewake, working as a talent in such a high production show was a completely new experience. While he was often seen mingling with the cameraman and directors and his passion for the medium was very visible, even he felt overwhelmed by the star-like treatment they received. Both of them were pretty enthusiastic about the fact that they got a vanity van, and Veewake was particularly happy that they had lots of attention and small luxuries at their behest. 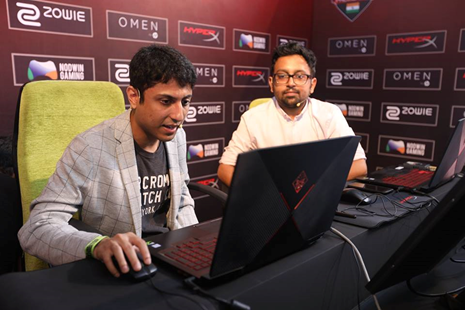 ClouDx and Veewake at the ESL India Premiership. Source:ESL India

A particularly fascinating thing about U Cypher was the sheer number of people that were at the sets. Not only did each team have 14 players, the numbers of AD’s, spot boys, camera people, light people easily made it look like a station at peak times. Even in terms of talent, there were casters, hosts, analysts all present on the set. So quite a bit of networking happened in between takes and of course a whole lot of masala sharing. Explaining Dota to the MTV hosts and members of the crew was a particularly challenging experience for ClouDx. Both of them seemed to be getting along with the other talent and sharing tips and tricks on casting as well receiving some on being in front of the camera. Even some of the younger Dota players were often seen interacting with the two, getting their advice and in general looking for ways to improve themselves.

Since they were so closely associated with the show and were there for all the episodes, it’s far more likely they saw things as they went down and will probably be able to judge things best as to what we can expect once the show airs. ClouDx feels that the cringe and masala will have to be a part of the show to appeal to audiences. However he also mentioned that there will be some genuine storylines and rivalries that will be interesting to follow. And what does a televised packaged concept such as U Cypher mean for ClouDx? Having been involved with the Indian esports scene for a long time know, he feels that the esport viewership has currently stagnated. He hopes that U Cypher, although may not appeal to the purists, may be able to reach out to newer untapped audiences, who in turn may then tune in to watch other Indian esport tournaments.

Catch Veewake and ClouDx on U Cypher from the 19th of Jan, 2018 on MTV everyday at 10 pm.
Episodes and gameplays will be available digitally on Usports.in, MTV, Voot, Youtube, Youtube Gaming and Twitch
About UsContact UsServicesRSS
DisclaimerAdvertise With UsArchiveEditorial Team