The second day of ESL Pro League Season 9 - Chinese Group Stage came to an end with the two Chinese giants redeeming themselves. Both Tyloo & ViCi Gaming were able to walk away victorious having had swapped their opponents.

Tyloo had to fight hard in a bid to take the series ‘2-0’ against MVP PK while ViCi Gaming kept calm after being down one match and worked its way through to win the series ‘2-1’ against 5Power Gaming. 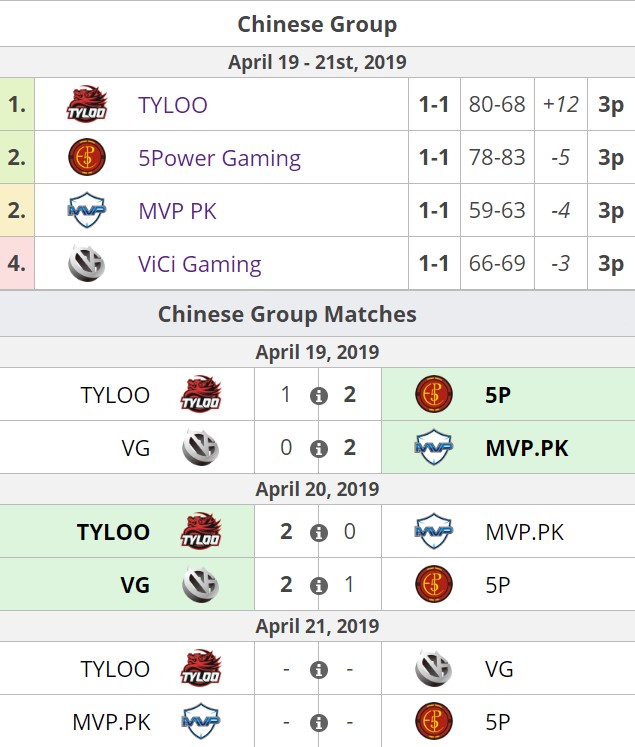 Tyloo shot down MVP PK on their map pick Inferno. Starting out as CT, Tyloo defended well, taking 9 rounds in their favour. But it was the second half when the Chinese squad actually got in the grove, clearing down rounds one after the other and took the match by a score of ‘16-7’.

MVP tried to comeback giving Tyloo a hell of a time on Mirage. After being down ‘11-4’ at halftime, Tyloo swung the match around in the second half playing CT and took the match into double overtime, finally securing a win with the scoreboard reading ‘22-20’.

@MVP_GG CS:GO We lost to the @tyloogaming the match. 0:2
We will win the next game. Thank you for your support.

ViCi after suffering a ‘16-9’ loss on Dust 2 came back to take down 5Power Gaming on Nuke with the same scoreline. The decider took place on Mirage where for the second time in the day a CT side comeback was witnessed as ViCi secured themselves another victory by a score of ‘16-12’.

And that's it! @VICI closes off the series with 2-1 victory against #5Power

Freeman and Kaze really stood up for ViCi with an HLTV rating of 1.34 & 1.24, respectively. But advent struggled a bit too much, while all the players managed a rating above 1.0, advent was left struggling at a mere 1.70 which can be reflected by his K/D difference of -20.

For Tyloo BnTeT as always led the charge holding a rating of 1.54 but his partner in crime xccurate was not in his usual form.

All in all both the teams swung around big time to turn around their loss on the first day.

Stay tuned for more action as the final matches take place today with Tyloo taking on ViCi Gaming while MVP PK squares up against 5Power. It will be a bit sad to see only one of the two Chinese giants making it through to the next Group Stage.