The ESL Pro League Season 9 - Asia continued on with the Chinese Group Stage. The first day concluded with ViCi Gaming and Tyloo, the best teams from China and also the most successful from Asia, going down against MVP PK and 5Power Gaming, respectively. 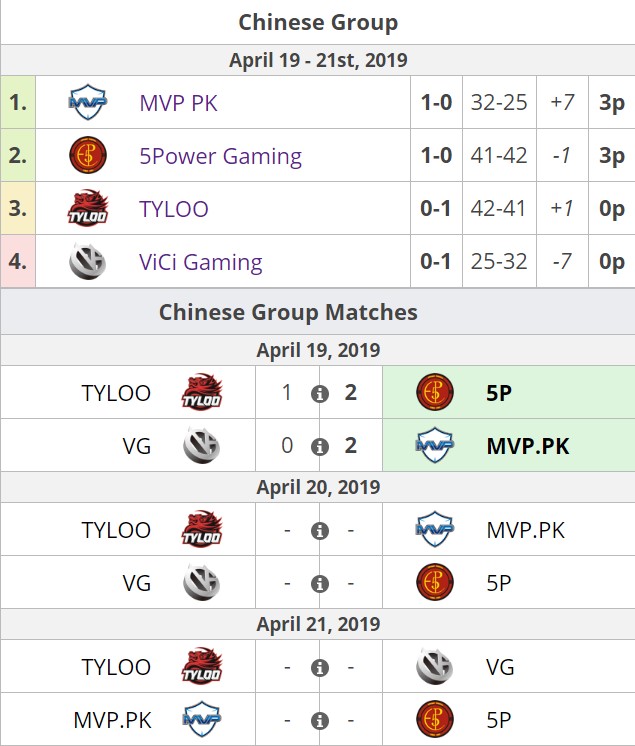 The opening match of the qualifier took place between Tyloo and 5Power. To everyone's surprise, Tyloo dropped the first map, Dust 2. The map was picked by 5Power who seemed to have studied their opponent pretty well as they executed multiple plays precisely without any hiccup.

Tyloo found their way back into the series by claiming Mirage by a score of ‘16-9’. The decider was played on Inferno where Tyloo were off to a good start securing 8 rounds playing T-sided. But 5Power were brutal on the offence as Tyloo could not muster enough strength to hold them back, giving way to an upset right at the start.

ViCi Gaming was nowhere near the prime form everyone has seen them in. They seemed to be all over the place. The first defeat on Inferno can be accepted as MVP PK is quite the force to reckon with on this map. Though they had a rough time playing T-sided the Korean’s were able to change the tide of battle by holding down the fort.

Next match was played on Overpass where ViCi was left in shambles and if an Asian team is taking them down on this map, it is truly a mark of progress in the right direction. But this time it was not all MVP but a self-suffocation by ViCi as well.

The team was just not up to the mark, they were certainly not the ViCi everyone is used to. The team recently withdrew from the DreamHack Masters Dallas 2019 - Chinese Qualifier due to some unknown internal complications, hope they clear out the problems as fast as possible and start delivering.

.@MVP_GG have done it! They've closed out the series with a 2-0 against @VICI

Great gameplay from both teams!
GGWP

Stay tuned as ViCi takes on 5Power while Tyloo goes up against MVP PK today on the second day of ESL Pro League Season 9 - Asia.