The final match of day two of the ESL One Cologne 2019 - Asia Closed Qualifier witnessed an all Chinese Lower Bracket clash between Tyloo and Ehome. It was a short series as Tyloo overpowered their opponents comfortably making their way to the Lower Bracket Finals to play against B.O.O.T-d[S] tomorrow. 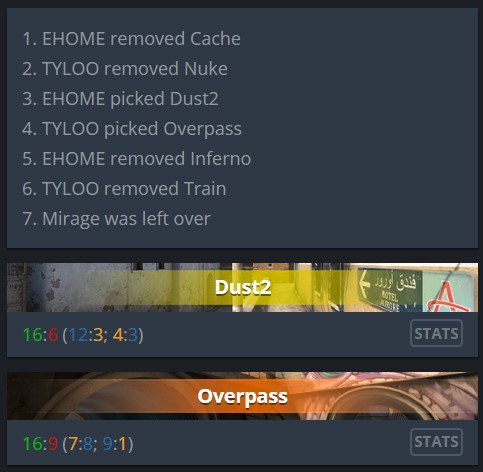 It was a quick series as Tyloo won back-to-back matches on Dust 2 and Overpass. The match took place on Ehome’s map pick, Dust 2, where a  formidable defence by Tyloo playing CT sided ensured the match for them as they secured 12 rounds in their favour. Summer continued his domination switching partners from xccurate to somebody.

The second map was their own pick Overpass where they seemed to be much more relaxed, avoiding fancy plays and sticking to the basics Tyloo playing T sided restricted the opposition very well. The Chinese squad held the sites well once again to run away with another victory and secure the series.

Tyloo after dropping down early in the event has reached the Lower Bracket Finals after facing two elimination matches. Let’s see if they make their way to the Grand Finals to avenge their earlier loss against MVP PK or will it be B.O.O.T-d[S] settling its score.