The first day of the StarSeries I-League 6 witnessed some intense matches being played with quite a few unpredicted results.

The group stage started off with eight BO1 matches being played on the first day which led to half the teams moving onto the high matches bracket while the other half moved down to low matches bracket.

The result after the end of the first day is as follows: 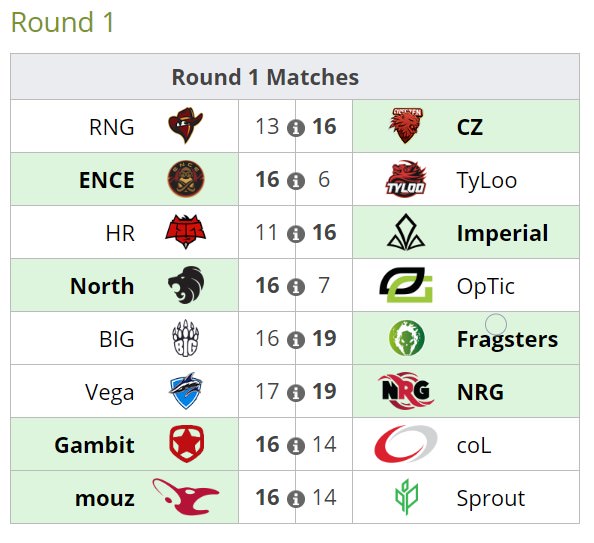 The two Asian teams, CyberZen and TyLoo played against Renegades and ENCE, respectively. While  CyberZen prevailed victorious over the Australian squad, TyLoo which is the best Asian team as of now failed to stand-up to the Finnish squad.

CyberZen faced-off against Renegades on Inferno, where a fierce showdown brought forth the best that the two teams had to offer. Both the teams went neck-to-neck with Renegades edging past CyberZen just before the halftime mark to take a single round lead but CyberZen were quick to respond in the latter half where they shut the Australians down constantly and took the game with a score of ‘16-13’.

On the other hand, TyLoo locked horns with ENCE on Inferno and the match was an absolute disaster for the higher ranked TyLoo. TyLoo played fairly well for the first half of the game but after the switch ENCE completely shut TyLoo winning seven rounds in a row and won the match with a score of ‘16-6’.

CS || WIN!! We take Inferno @ence 16-6 @tyloogaming and secure our first Swiss round victory in #StarSeries6 Round 2 tomorrow

Some other unexpected results that made the first day of the group stage worth watching was Fragsters taking down BIG along with Imperial triumphing over HellRaisers.

The Germans were left surprised by the unexpected plays that Fragsters pulled on Nuke and although BIG pushed the game down to overtime, they were never really in control of it finally bowing down to the Danish team with the scores reading ‘19-16’.

HellRaisers lost to Imperial on Cache, where HellRaisers failed to hold onto their lead managing to win just two rounds playing as CT while Imperial won ten rounds to take the game away from the Ukranian team with the scoreboard reading ‘16-11’.

The schedule for the second day of the group stages is as follows: