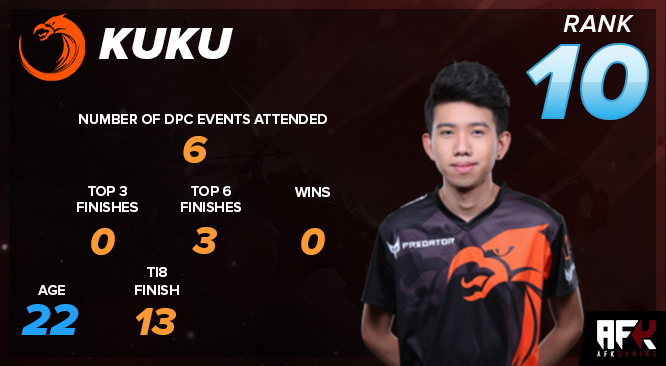 It’s been a difficult year for Kuku individually and for his team as we all know but his versatility and playmaking skill puts him in at number 10 for us. He started the year playing support but in the shuffle that followed TI8, he was seen playing as TNC’s offlaner, helping his team reach top 6 at the Kuala Lumpur Major. While TNC finished last at TI8, they did look impressive at KL. However, the aftermath of the Chongqing Major debacle saw him decide to take a break from competitive Dota and he is the only currently inactive player on our top 10 list. In TNC, his ability to make sacrificial plays and create space for his cores has been instrumental to the team’s success in making them one of the top 2 teams in SEA. 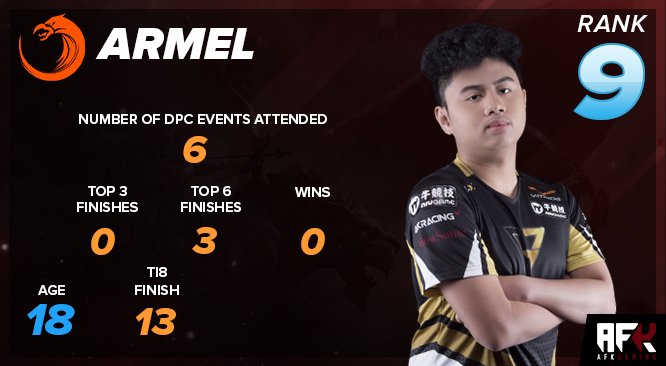 The 18-year-old Filippino has been a force to reckon with in the mid lane and has grown into a formidable player across 2018. He has built himself up a significant hero pool and with heroes like OD back in the meta, Armel can only grow stronger. While he was unable to win any major silverware this year, he has paved the way for many young and aspiring Dota players across the SEA region who wish to break into the pro scene. 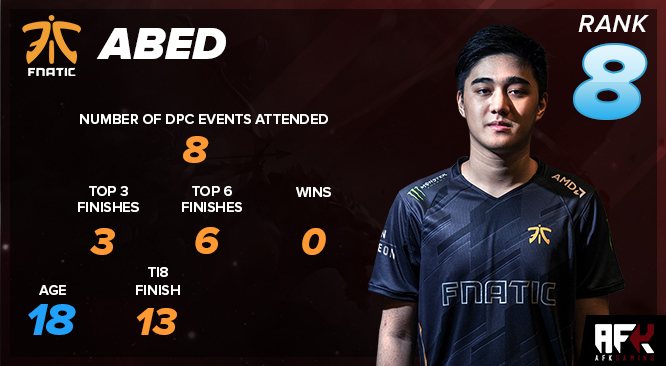 Abed is touted as one of the most mechanically gifted players coming out of SEA and his rise to fame right from the days of Execration has been a treat to watch. To this day, his Meepo strikes fear in the hearts of enemies and Fnatic often bring it out to catch their opponents by surprise.

While Abed and Fnatic have been unable to pick up any DPC trophies yet, the new Fnatic after TI8 have looked like one of the top teams in SEA. 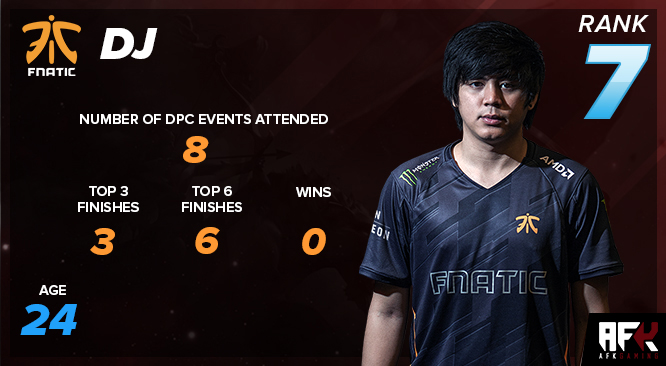 A star in the 4 position, DJ’s playmaking capabilities and clutch team fight presence makes him one of the best in the world and while he doesn’t have the necessary trophy cabinet to match his skills, he certainly is up there among the best.

Unfortunately, a lacklustre year in terms of results means that he takes only the number 7 spot in our list. 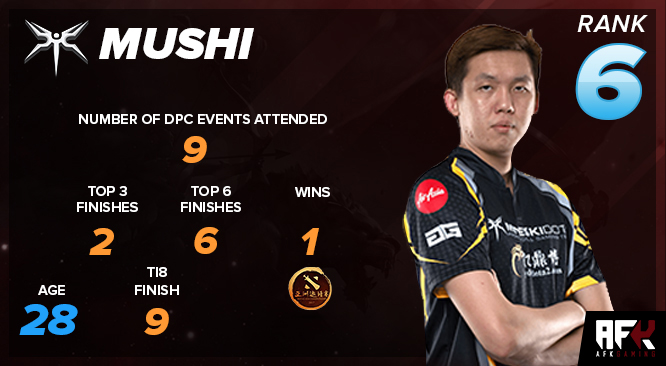 One of the true legends in the SEA Dota circuit, Mushi led the only SEA team to win a DPC event in 2018, Mineski. While his stint with the organization may be over, his ability to bounce back time and again with different rosters, speaks volumes about his determination and drive as a player.

He’s also the highest placing SEA player at a TI and one of the pioneers of Dota in the region. Currently, he is with the young squad of Neon Esports and the team showed potential, almost taking down Mushi’s former org, Mineski in the grand finals of the DreamHack India Invitational. Only time will tell what 2019 holds for Mushi, but his win at DAC cements his place in the 6th position in our list. 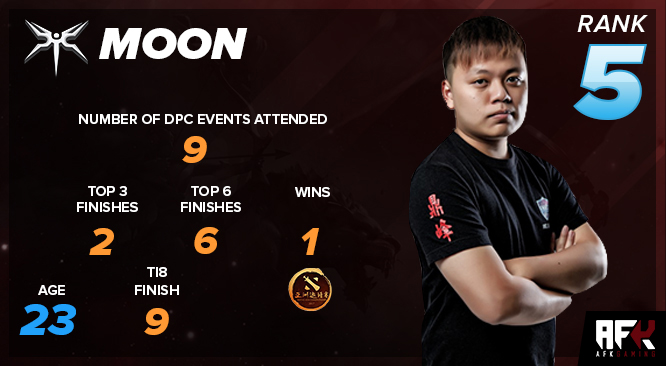 Moon’s performance on the mid lane was critical to Mineski’s success this year, and his ability to perform consistently was a key reason as to why Mineski were able to achieve 6 top 6 finishes this year. However, since TI8, the Mineski squad has been unable to perform at the highest level and this puts them in a tricky situation. They have already missed the first 4 DPC events of the season, which means that in 2019 they will have their work cut out for them. 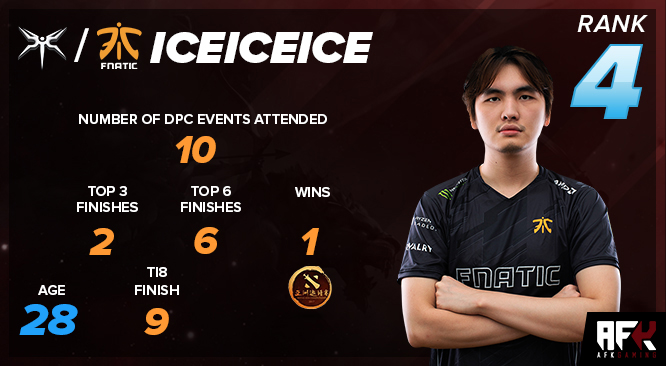 The Singaporean offlaner has been on the top tier of international Dota for many years now and his prowess on the offlane is not only highly regarded, but intensely feared. However, there has been some dip in form this year, and his inability to perform in big games has often cost his team the chance to advance.

But iceiceice and his new squad of Fnatic look sharp as ever, and can hope to pick up trophies for the region in the new year. His experience and composure will be vital to Fnatic’s success and his ability to mentor the likes of Jabz and Abed will go a long way for the future of SEA Dota. 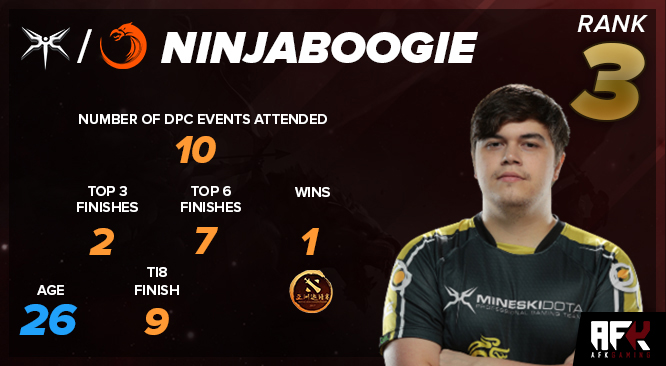 Making it into our top 3, is ninjaboogie, who played support for Mineski before joining TNC post TI8. His sacrificial play from the 5 position was hugely underrated and his ability to lead the team especially in the early laning phase has been something that the SEA scene has lacked in the last few years. His impact was immediately seen after joining TNC as well, as he led them to a top 6 finish at Kuala Lumpur. 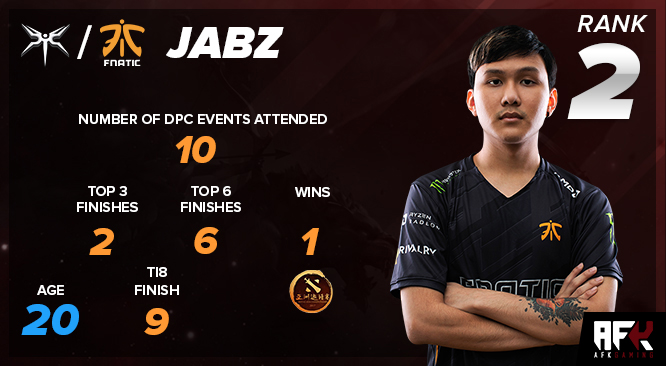 In number 2 is Jabz, the Thai support player whose plays from the 4 position were very much key to whatever success Mineski had in the last DPC season and in 2018. The 20-year old seems to have a bright future ahead of him  and was particularly impressive on heroes like the Earth Spirit and the Dark Willow. He has, however, made the switch to Fnatic along with iceiceice and will look to bring in some silverware for SEA as the new year unfolds. 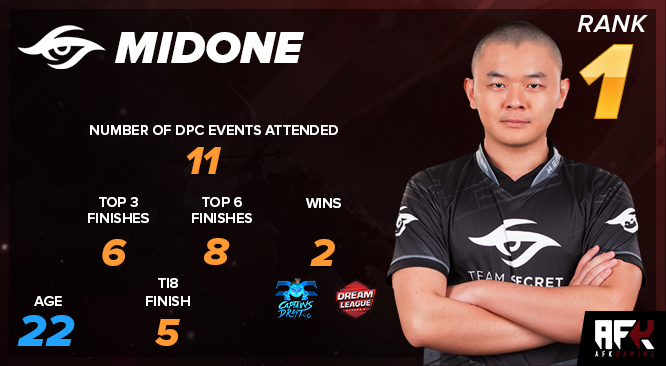 And taking the top spot in our list for the best SEA Dota players, is Midone, the Malaysian mid laner who plays for Team Secret. While he may not be playing in the SEA region currently, Midone has done the region proud with all the success that he has managed to gain, playing for Secret.

As if playing in one of the world’s best teams wasn’t enough, Midone has established himself as one of the best individual players in the world, making spectacular plays as often as possible. His made a name for himself playing heroes like the Kunkka, Monkey King and Ember Spirit and his ability to snowball after a good laning phase is almost unparalleled.