After narrowly losing out in the TI8 SEA Qualifiers, TNC Tigers got back to winning ways at the ANGGAME #2 China vs SEA Online finals, taking a 3-0 victory over Geek Fam in the grand finals. Not only do they receive the winner’s share of the prize money which was roughly 15,000 $, but along with Geek Fam and Chinese team, Taichi Gaming have secured a slot in the LAN finals.


The Tigers come out unscathed


It was an emphatic performance for the Tigers as they didn’t drop a single game along the course of the tournament. In the SEA leg of the competition, they went 7-0 in the group stages and took the top spot to advance to the next round. Geek Fam, Clutch Gamers and Alpha Red were the other SEA teams that advanced along with them.

In the second phase of the competition, they were pitted against 4 Chinese teams in a double elimination format. The Tigers got clean 2-0’s over 3 Chinese opponents in their run to the grand finals. They used their offlane Enigma quite effectively against the Chinese opponents and were able to force gg’s and reach the finals.


A loss to Taichi Gaming put the reformed Geek Fam side in the lower bracket early on, but the Malaysian org showed spirit and determination to make it all the way to the grand finals. They took down 2 of their SEA brothers, Clutch Gamers and Alpha Red as well as China’s Cavalry to set up a date with Taichi in the lower bracket finals. Looking for revenge for their earlier loss, Geek Fam drafted two hyper-aggressive lineups featuring Ursa, Slark and Ember across the series and brute forced their way into the grand finals. 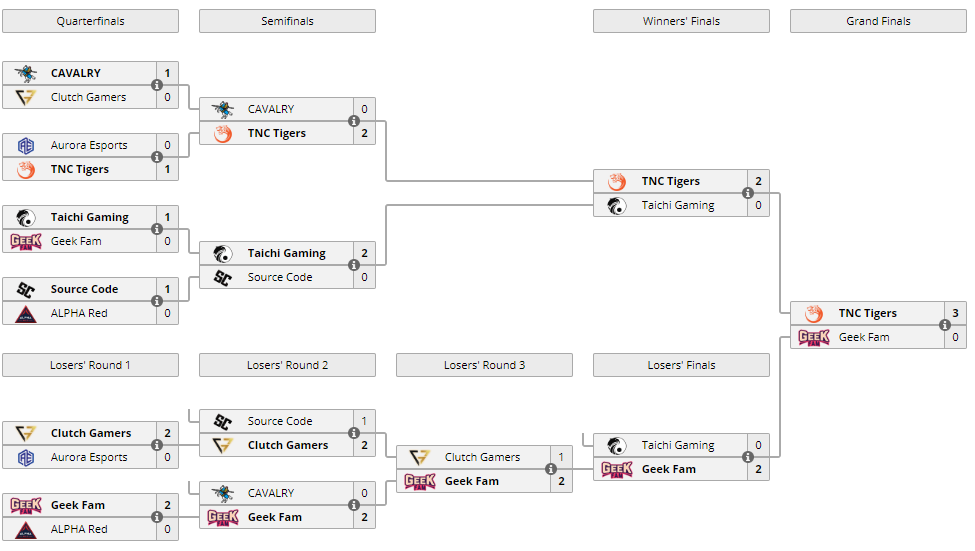 
The grand finals were quite one-sided as the Tigers used their Treant Protector to effectively dual lane in games 2 and 3. Both games saw vtFaded suffering in the safe lane and the Malaysian’s were unable to make a comeback. The first game of the series was slightly closer but much like the rest of the series, Skemberlu’s choice of hero on the 4 position looked to be quite experimental, costing them the game. The young carry player has been playing the 4 position after his comeback to Geek Fam but his displays on the Sven and Beastmaster will be something he will look to quickly forget.

Geek Fam certainly look to be a team capable of great things but need some more time to get into the groove. The Malaysian org walked home with a second place trophy and a cheque of 8.8k USD. Both teams along with Taichi Gaming will now play at the LAN finals, the details of which are yet to be revealed.