Many allude The International 3 to be the greatest Dota 2 tournament of all time. And for good reason, it had everything: Fountain Hooks, Aegis Denies and one hell of a Grand Final. But if there is one tournament that could give it a run for its money, it’s The International 6.

The tournament had so many iconic moments commemorating its legacy amongst the Internationals. From the “Ding Ding Ding” lines to The Mega Creep comebacks, the biggest upset in The International’s history to the “Moo” chants in the finals, this tournament was hype from start to finish.

Here’s a refresher of the event in its entirety and a glimpse at what we are hoping to see at The International 8.

This tournament arguably had the most stacked Wildcard in history. The four teams: EHOME, Escape Gaming, Execration, and Complexity shined in one way or the other and gave us some ridiculously close games in their journey to the Group Stages.

Both upper bracket matches were close 2-1 affairs with EHOME and Escape advancing to the Winner’s bracket finals. So that left Execration to take on Complexity where a 15-year-old Filipino player, Abed “Abed” Yusop showcased his potential as he almost single-handedly decimated the Complexity lineup with his signature Meepo and knocked them out of the event.

When the dust settled on the Wildcards, EHOME and Escape Gaming advanced to the Group stages as Execration lost their next match. 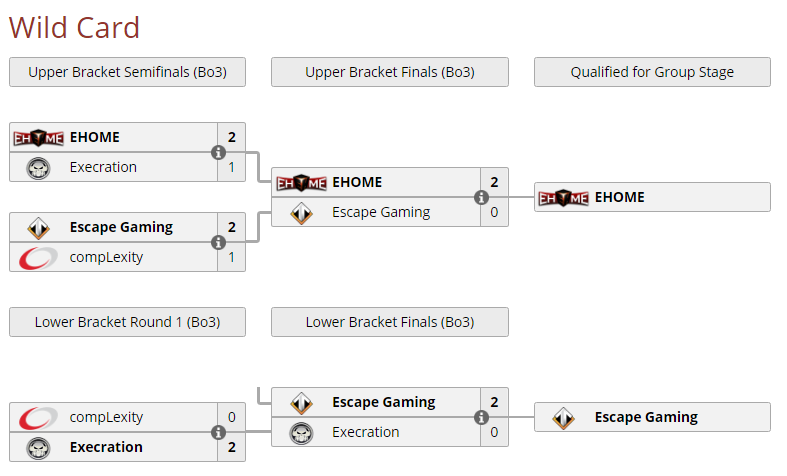 As expected, the favourites for the tournament, two-time Major winners, OG styled on the rest of Group A as they ended up on top of the group. Surprisingly, Evil Geniuses also had a good group stage performance considering that they had just undergone a roster shuffle, finishing in 2nd place. Wings Gaming were also looking quite decent, but it certainly didn’t look like they had hit top form just yet. Escape Gaming and LGD Gaming finished in the bottom of the table after several poor performances in the Group. 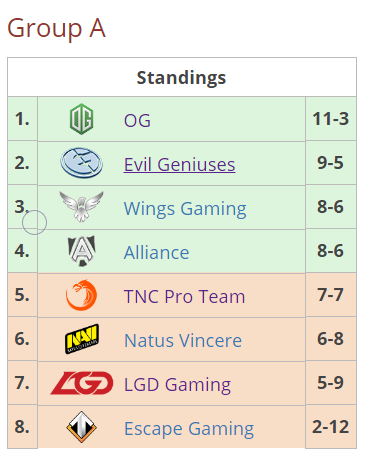 The most memorable match of the Group Stages was the showdown between Alliance and Evil Geniuses. Alliance desperately needed a win to secure a spot in the Upper Brackets, but EG looked like they were heading for a win with their Drow Ranger lineup. But fate had other plans

Surprisingly it was the team who made it through the Wildcards: EHOME, who were on top of Group B, followed by Digital Chaos who were looking very strong, especially considering that they built their team from the discards of the EG/Team Secret roster shuffle. Team Liquid and Team Secret had shockingly poor showings in the Group Stages, getting relegated to the lower brackets. SEA representative Fnatic, didn’t really play as well as they would go on to, and hence started off in the lower brackets. 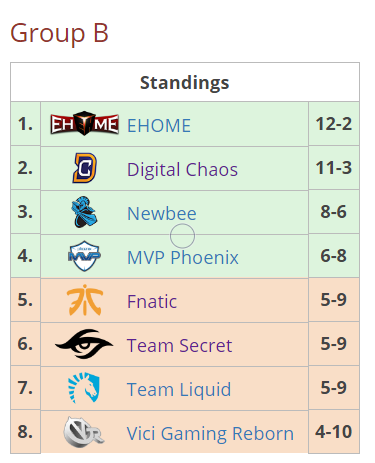 The Biggest Upset in the History of The International

OG’s stellar Group Stage performance made them the favorites and they were poised to become the champions. But SEA had other ideas. First, it was MVP Phoenix who played some extremely fast-paced Dota to knock OG down to the lower brackets with a 2-1 victory.

And then came TNC Pro Team. TNC barely made it to The International 6, only qualifying through the Open Qualifiers #2 before making it through the Regional Qualifiers. But at TI6, they were quite decent, posting a 7-7 score in the group stages and knocking out VG.Reborn in the first round of the lower brackets.

But what followed, made them go down in the history books. Going up against 2-time major winners OG they weren’t expected to survive. But TNC held strong in the opening game. With an aggressive lineup they picked apart OG time and again to go 1-0 up. OG looked like they would even up the series in Game 2, but a series of insane Chronos from Sam_H completely turned the tides and knocked out the two time Major winner from TI6.

The other upper bracket games were relatively straightforward as Wings Gaming, Evil Geniuses and EHOME looked strong and moved on to the next round. But the lower brackets saw Team Secret, and Na’vi eliminated in the very first round after questionable plays. Fnatic had kicked off what would be a stellar lower bracket run by beating Escape Gaming. But that run would be excelled by an even better run from NA rejects Digital Chaos.

In the 6 year history of TIs, no team had ever successfully overcome Megacreeps. Until August 10th 2016 when EG met EHOME in one of the best games of Dota 2 ever played. From the very first minute, both teams went blow for blow in teamfight after teamfight. But EHOME slowly pushed down EG and managed to secure Megacreeps.

With the impossible challenge of overcoming megas in front of them, EG didn’t waver and put up an implausible defense and somehow climbed their way back into the match with some incredible displays of Individual skill from SumaiL and well-coordinated teamfighting. After a great hold against EHOME, 75 minutes in. EG took the momentum on their side and used it to take down EHOMEs base, scripting one of The International’s most iconic moments.

Like we said, Fnatic had a great run that saw them beating Alliance and MVP Phoenix as well as upsetting Team Liquid to make their way into a Top 4 finish. Unfortunately, their run would come to an end after Digital Chaos knocked them out of the event in the Lower Bracket Semifinals.

DC have their revenge

They would then have a chance to redeem themselves. Their roster was broken up earlier that season because EG & Team Secret decided to shuffle and poached players from the original Digital Chaos roster.

While the first 2 games ended in convincing victories, game 3 was a nail-biter until the end. DC got off to a great start with all 3 cores getting off to a great start while on EG’s side only Fear was holding the line. Eventually, DC’s three core lineup eventually gained ground on Fear’s farmed Terrorblade. EG didn’t have the mobility nor the catch in their draft to track down Slark and a split-pushing Beastmaster from Moo, who capitalized on every chance to peck away at EG’s raxes. It finally reached a point where EG went for an all-in push down the mid lane, expending multiple buybacks. DC was able to hold the line while getting mega creeps at the same time.

With one last push, DC knocked out EG and finally tasted revenge to move to the Grand Finals and face off against Wings Gaming.

While all this was going on, one team stood above all the rest. Wings Gaming was a cut above the rest and continued to style on every single one of their opponents and sometimes even chose to meme it up with Techies and Pudge picks.

They were untouchable and cruised to victory while playing anything and everything. Wings only lost twice on the main stage. Both times with a Pudge, and both times against Digital Chaos, once in the first game of the Grand Finals.

Wings went on to win the next three games of The Grand Finals in convincing fashion while displaying the kind of cleverness and depth to their drafts that had dominated the main event. In their final three games, they used 13 different heroes (out of a possible 15). After the Aegis was lifted, analysts Black and Winter proposed that Wings Gaming may not only be the best Dota team they’ve seen at TI, but the best Dota team ever. 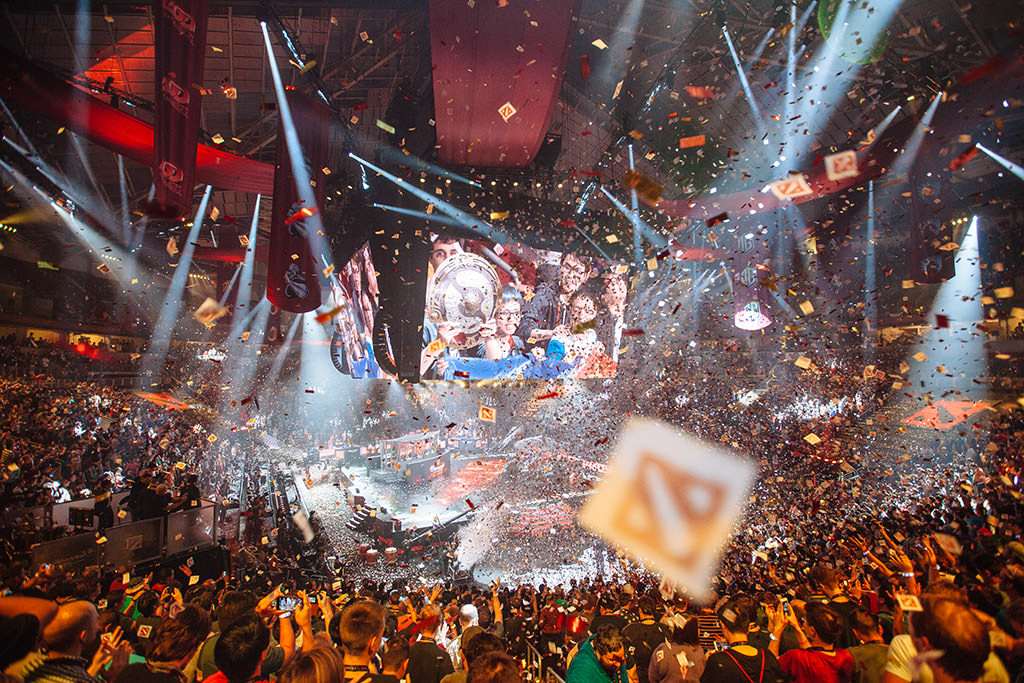 “You can’t reach perfection, but they are so close,” Black said.

TI2 - The Empire strikes back