The International 4 is regarded by many players as one of the worst tournaments in Dota 2 and that the entire tournament was boring and pretty forgettable. Our unpopular opinion: they’re wrong.

TI4 was quite an incredible tournament up until the Grand Finals. We had some of the most awesome games and cinderella runs in TI history. We also saw the implosion of one of the greatest all-star teams - Team DK allegedly in part due to a media company. Add the fact that this TI was the debut of current superstars like Arteezy, PPD, and EternaLEnVy amongst many others, this TI is undeniably a historic tournament.

Here’s a brief refresher to prove that TI4 wasn’t as boring as everyone seems to think.

The tournament enthralled the fans right from the very first phase - The Wildcards to determine which team would move on to the 16 team Group Stage. MVP Phoenix came into the event as the first ever Korean team to attend TI. A team who were beaten by Blitz, Purge, and Co. in their initial stages had made it into TI.

There they shocked the world by eliminating Virtus Pro, a team full of experienced veterans like Illidan, God, and Arsart. Unfortunately, their underdog run came to an end in the next round where Team Liquid eliminated them to move on to Phase 2. 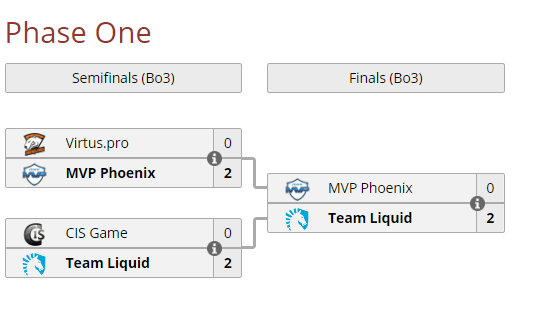 Probably my favorite group stage amongst all TIs because this was the only one where we had a 16 team round robin to decide the teams heading into the main event. It was Chaos, It was madness, It was Marvellous.

We saw some great plays like YamateH’s incredible Armlet toggles, and DDZ’s Ultrakill against Team DK as well as some questionable ones like Bulba’s Aegis deny and whiffed sonic waves but the two best games of the Group Stages were Mouz’s incredible comeback against Fnatic and one of the first ever showings of a Midlane Earth Shaker by Korok in a 72 minute brawl-fest which was the Na’vi.US vs Invictus Gaming match.

Vici Gaming, Evil Geniuses, Team DK and Invictus Gaming walked into the tournament as favorites and it was no surprise seeing them on the top of the table when the group stage came to a close. 6 teams were eliminated from the Group Stages in Phase 2 (Arrow Gaming, Na’Vi.US, Fnatic, Team Empire, Defending Champions Alliance, and Team Liquid) setting the stage for Phase 3.

This was one of the biggest problems with TI4. The fact that Phase 3 was part of the Group Stages, meant that fans would only get to see 8 teams out of 16 in the Main Event. Had they gone with the (now staple) 16 team main event, fans would have been far happier as they would have witnessed many more games, and many more teams in the Benaroya Hall.

Newbee started turning on the heat in Phase 3. It finally looked like the master drafter of the east, Xiao8 had figured out the meta and started racking up win after win, eliminating Titan, and pushing down Na’vi and Invictus Gaming to the lower brackets.

On the other side of the bracket, we saw LGD Gaming eliminate Team Liquid. But the Chinese team couldn’t manage to beat a surging Cloud 9. Team DK stood strong, moving on to the upper brackets with a solid 2-0 win over Cloud 9. 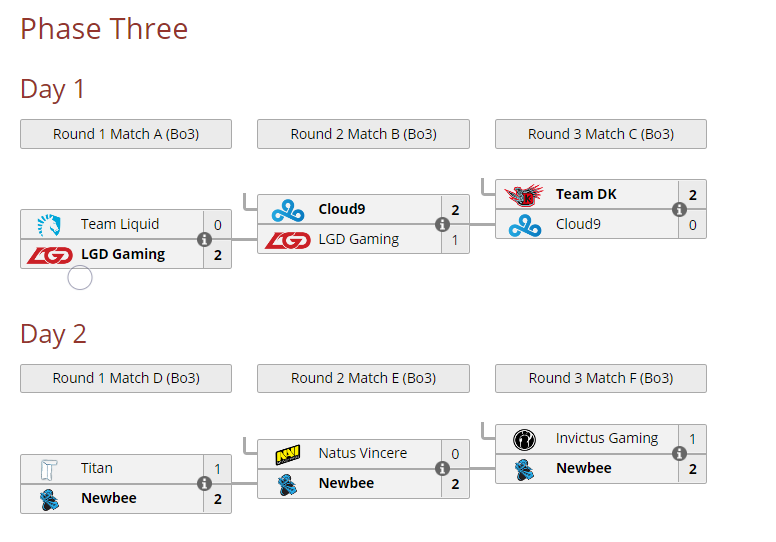 Fun Fact: A Mind-boggling 151 games were played in the Group Stages of TI4. A Record for TIs.

In the lead up to The International, Teams pour countless hours of intense practice and discussion into carefully crafting winning strategies that would give them best shot at lifting the Aegis of Champions. So when a Chinese news group leaked team strategies just before the Main Event you could imagine what went through the minds of Team DK.

In a post made on Weibo, Chinese user explained that Gamefy (the news group in question) had illegally eavesdropped on Team DK in the off-limits game room and recorded them discussing strategies and drafts despite having no permission from Valve/Team DK. 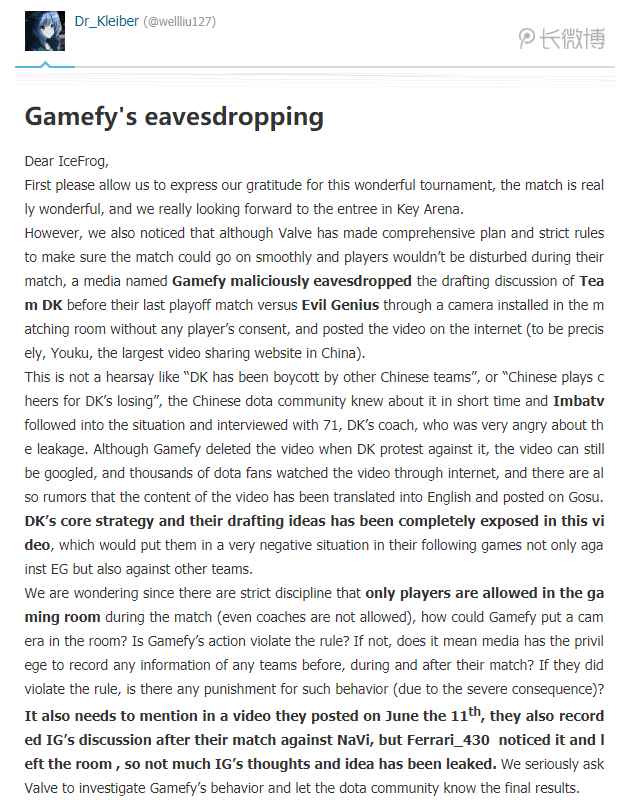 The video was originally submitted to Chinese website Youku, and later translated and uploaded to Gosugamers thus spreading across the community.

Both Videos were only taken down after Team DK’s coach 71 and the rest of Team DK expressed their outrage in an interview. But the videos had already been downloaded and uploaded to several other mirrors which ultimately was detrimental to Team DK in the Main Event.

Gamefy were later prohibited from covering The International and lost their reputation and integrity amongst the Dota 2 community.

The Road to the Grand Finals

The way the Main Event was scheduled also heavily contributed to how it would be perceived later on. We knew one of the two Grand Finalists on just the 2nd day, which in hindsight, killed a lot of hype.

It was Newbee who continued their rampage from Phase 3 and moved on to the Grand Finals pushing down two of the favorites Vici Gaming and Evil Geniuses to the lower brackets.

Speaking of the lower brackets. It looked like a Cinderella run was on the cards for Cloud 9. After a scintillating performance which saw them hand Na’vi their first elimination before the Grand Finals. They faced one of the favorites, Vici Gaming.

After a Game 1 loss, Cloud 9 picked up the first-ever Meepo in a TI main event and proceeded to beat Vici Gaming in one of the most tactical and complex mind game battles in Game 2 to push it to a Game 3.

The crowd just couldn’t shut up, could they?

Cloud 9 attempted a Level 1 Roshan in the final game, but the cheers from the crowd seemingly tipped off Vici Gaming who very clearly made a U-turn right as the crowd started cheering and  jeopardising the Western team, which handed the win on a silver platter for Vici Gaming.

The biggest comeback in history

Just imagine a team. A team who were suddenly removed from the direct invite list as a result of a roster change and were forced to play in the qualifiers. A team who barely made the cut in the Group Stages. LGD Gaming was that entity. They came into the Main event as underdogs and surprised everyone at the Benaroya Hall with a shocking 2-1 victory, eliminating Invictus Gaming and moving on to face the legendary Team DK.

This was a career-defining moment for most of the LGD Gaming players. They were down two racks against Nature’s Prophet. They were at a 25k deficit in terms of networth, back when there was no inbuilt comeback mechanic. By all logical metrics, the game was done and dusted. But a series of incredible plays and clutch lategame decision making spurred them on to win Game 1 against Team DK.

Team DK would later come back on the following day to take the series by virtue of 2 back-to-back wins and move on to face Vici Gaming in the next round.

Battle of the Brothers - Burning vs RotK

Back then, Team DK was seemingly boycotted by almost all of the Tier 1 Chinese teams. They refused to scrim against them. Some rumors on reddit said that it was because Team DK had foreigners (Mushi and Iceiceice) on their team. While others have said that it was because Team DK picked clowny heroes and drafts, which lead to the other Chinese teams assuming that DK didn’t take their scrims seriously.

Vici Gaming were the only Tier 1 Chinese team who would scrim with them thanks to commaradry between Burning and Rotk. So it was almost poetic in a way when DK faced off against Vici Gaming in the Lower Bracket Semi-Finals.

The series was long and hard-fought. But it was Vici Gaming who emerged on top, eliminating DK and moving on to face Evil Geniuses in the Lower Bracket Finals.

Every day lived is a page of history.

Until this match, almost none of the teams had found the answer to Vici Gaming’s death-ball strategy. Their usual Modus operandi was that they would just run you over and take down the racks in sub 20-minute stomps.

The same could be said for Game 1. Evil Geniuses just didn’t have an answer for the Vici Gaming cavalcade. But Game 2 would prove to be different. Universe almost single-handedly won the game for Evil Geniuses pulling off one multiman Chronosphere after the other, halting Vici Gaming’s momentum and showing the world, how to beat the Deathball.

To be honest, all of us were very underwhelmed with the Grand Finals which didn’t even last an hour and a half. All 4 games were stomps one side or the other and were basically a rehash of the same strat. Deathball.

After all, 2014 was one for Chinese Dota, with the all Chinese Grand Finals between Newbee and Vici Gaming. Newbee ascended to victory, in the end, taking out VG 3-1 with complete confidence in their drafts and gameplay. They developed a plan to combat the style of Vici Gaming, and it succeeded, and they ended up lifting the Aegis of Champions proving that they were indeed the strongest team in the world at that moment.

To sum up, I’ll admit that this is the least memorable TI amongst all of them. But this was in no way a disappointing event. Universe’s Chrono, Cloud 9’s run, and the legendary Team DK’s appearances make the tournament worth rewatching and reliving.

Next up: The International 5 - NA’s moment finally arrives