2013 was an epic year in the competitive Dota scene as we saw Swedish side, Alliance rise to the top and lift the Aegis in what can be described as the best grand finals a TI has witnessed till date. And it wasn’t just the finals, the entire tournament had some incredible moments which makes it one of the best TI’s to have taken place, period.


The hype for Western teams was real coming into TI3 as both Na’Vi and Alliance looked in top shape. Not only had they been dominating the EU region but both teams had gone to China and won a LAN against the big names making them favorites to take the title.

Previous year winners Invictus Gaming, LGD Gaming, Rattlesnake, DK and Tong Fu led the charge for the Chinese hopes while MUFC and Orange along with Zenith were the SEA representatives. Also at the event were German side, mousesports, LGD international, NA’s Team Liquid and Dignitas.


In the group stages, Alliance breezed through their group finishing 14-0 at the top to cement their place as the tournament favorites. IG, Tong Fu and Orange finished in the top 4 with the same 8-6 scorelines in Group B as well.

Group A was closer but Na’Vi edged out DK to take top spot and Fnatic and LGD joined them in the top 4. The group stages were a clear indicator of how things were about to go down and they set the tone for one of the most incredible playoff stages in TI history. 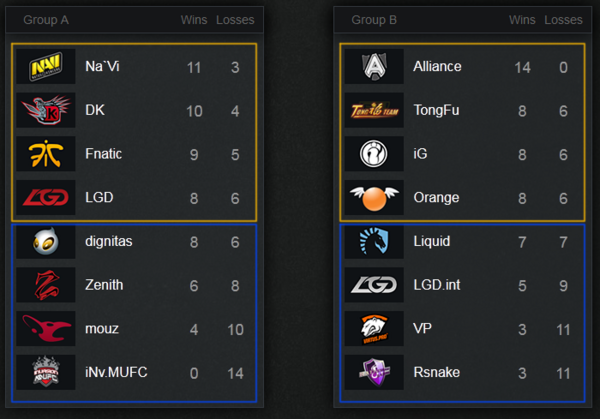 
Na’Vi and Alliance meet in the winner bracket finals


Much like the group stages, Alliance breezed through the upper bracket, taking down LGD first and then DK to make it to the winner bracket finals. Joining them were arch rivals, Na’Vi who found victories over Orange esports and Tong Fu. The win over Tong Fu would go down as a TI classic as the CIS team were able to make an extraordinary comeback in game 3 of the series thanks to a cheese strat known as Fountain Hooking. In the winner bracket finals, Alliance took the game to Na’Vi, taking an easy 2-0 and found themselves as heavy favourites after making it to the grand finals.


Sylar to fall; Liquid are doing it


In the lower bracket, LGD faced up against Liquid after dropping down thanks to a defeat at the hands of Alliance. The Chinese side were heavy favorites against the NA squad but somehow Bulba’s Clockwerk was able to catch out Sylar in a play that would leave casters and fans at the venue in awe as the largely North American fans were exhilarated after knocking out one the biggest names in the tournament.

Elsewhere, Orange Esports showed some great Dota coming out of the largely unknown SEA region taking wins against big names like DK and Tong Fu to set themselves up for a lower brackets final encounter against Na’Vi.


Despite being fan favourites, Na’Vi’s unpredictable nature often came to bite them back and a classic example of this was in the lower bracket finals of TI3. The SEA team started strongly to take game 1 with good shows from all their cores. Na’Vi bounced back with an all-out aggressive strat in game 2 to tie the series.

In game 3, Orange had a massive advantage thanks to a superior draft that allowed Mushi’s OD to be 3 times the networth of Dendi’s Puck and gave his team a 12k networth advantage. However Ky.Xy made a costly mistake in denying the Aegis from his team in a seemingly inexplicable mistake which allowed Na’Vi a chance to get back into the game.

Despite being far ahead, Orange began to make mistakes and the veteran Na’Vi squad punished them heavily for it and took the game and the series. The Aegis deny became an immortal meme and cost Orange a game that they should never have lost. It would be the farthest an SEA team ever made in a TI, a record that is unbeaten to this day.


The grand finals, featured Na’Vi and Alliance and the clash would eventually be dubbed as the El Clasico of Dota 2 because of the hype and the popularity of the matchup. On one side was Alliance, the Swedish side who had won 20 games and faced just one loss and on the other was Na’Vi a team who was playing it’s third consecutive TI final. The CIS side was already a team with one of the largest fanbases and the fact that their playoffs run included comebacks from unwinnable situations made for an exciting finale.

Both teams went toe for toe showing their strengths in the opening games. Alliance took a 15-minute sweep in game one while Na’Vi struck back with a 20-minute winner in game 2 to effectively turn the series into a bo3. Na’Vi then showed that they had the answer to Bulldog’s LD, using Razor to effectively counter the hero and take the win. In game 4, s4’s mid NS went unanswered and took over the game as Na’Vi found themselves outdrafted. Finally, it was down to the last game of the series. Both teams had shown their strengths and the tension was palpable as things were on a knife’s edge with score tied at 2-2.

Na’Vi sacrificed Xboct’s safelane Alchemist to get Funn1k and Dendi enabled but Na’Vi’s carry player held his own magnificently as Na’Vi won all 3 lanes and started to take a take a lead. Alliance resorted to split pushing and dodging fights, knowing that a 5 on 5 encounter could never go their way. With Aegis in tow, Na’Vi barrelled down the midlane but Alliance pushed both the top and the bottom lanes, leaving only s4 and Akke to defend. Times were desperate for Alliance, and they needed a hero play from someone to keep their TI dreams alive.

Cometh the man, cometh the hour they say and it was s4 who became the man of the hour, stepping and making a play that would be dubbed as the Million Dollar Dream Coil for all future purposes. Na’Vi had the time to get the barracks in the mid lane and back off but s4 cancelled 3 TP’s which allowed the Swedes to get 2 lane of barracks themselves. The game became wide open and it was Na’Vi who were on the backfoot as despite a lead they were down 2 lanes and unable to fend of the constant pressure applied by Bulldog’s NP. S4 cancelled another set of TP’s as Loda, Bulldog and EGM tore open Na’Vi’s base and forced the gg.


A TI to remember


TI3 is memorable for a host of reasons. Bulldog’s plays on Nature’s Prophet throughout the tournament was largely responsible for Alliance’s dominance he would inspire a whole generation of NP players after TI3. Mushi’s SF, Xboct’s Alchemist and Funn1k’s offlane Bounty Hunter all made TI3 a treat to watch. Not many can forget the image of Bulba shouting and celebrating after Liquid upset LGD and even Dendi’s respectful gesture towards Mushi, after knocking out Orange, solidified his position as the most loved player in the pro scene. TI3 had it all - the fan favourites, the upsets, the drama, the comebacks, the throws, an unforgettable 5 game finale and it’s fair to say that it set the benchmark for what a Dota tournament could bring to the table. Alliance walked home the champions, with the Aegis and 1.4 million dollars but it was good Dota and the community who were the real winners at TI3.

Next up: The International 4.