In terms of prize pool, The International 2017 or TI7 was the largest one till date, not just in Dota but across all of esports with a whopping 24.787 million USD on the line for participating teams. But it wasn’t just the big bucks, TI7 delivered in all respects - be it the big games, big names, high production value and ofcoure, some top-notch Dota.


Context, as we all know is one of the most important parts of telling a story and coming into TI7 we feel the need to fill you in on what led to this huge event. Only 6 teams got direct invites to TI7. OG were obviously among the big names, having dominated the season with back to back Major wins at Boston and then Kiev. However they were weary, as after having dominated much of 2016 an upset loss to TNC had led to a shock exit from TI6 and they were determined to not repeat the same mistake. VP, EG, Team Liquid, Invictus Gaming and Newbee were the other invited teams. 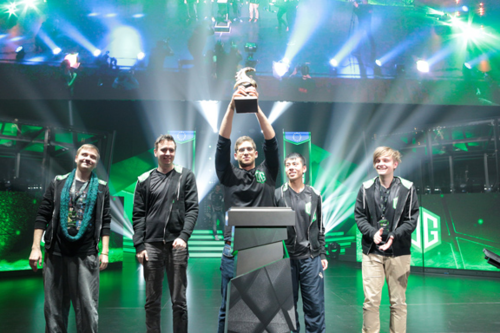 From the qualifiers, EU saw Team Secret and Hellraisers while CIS’ one spot went to Team Empire. Three spots for SEA meant that Fnatic, TNC and Execration qualified for the event and NA saw Envy’s Cloud9 and Bulba’s Digital Chaos qualifying. From China, it was iG.V, LFY and LGD who in fact were making their seventh consecutive TI appearance. And finally Valve’s decision to allow South American teams a dedicated spot meant that Infamous completed the list of 18 teams which were playing at TI 7.


No wildcards at TI7 meant that the action kicked off directly from the group stages and a ton of surprises, upsets and good Dota followed:

Group A - Liquid and LGD come out on top

Group A saw Liquid finishing in the first position after only dropping 3 games, followed by LGD who dropped 4. Close behind them were EG who despite tying five series' didn’t lose a single one. The 4th place was taken by TNC as they beat out the likes of iG.V and Secret , dropping only one series to LGD.

Secret, Empire, iG.V and Infamous took the lower bracket spots and with 6 losses, Fnatic ended up getting eliminated from the competition.

Group B - OG stumble but LFY outclass their opponents

Despite not being favourites, LFY smashed a home run in the group stages winning 6 series' and taking top spot. They finished well above Newbee, who were closely followed by Virtus.Pro and Invictus Gaming. OG found themselves on the shorter end of the stick and left their fans in worry by starting in the lower brackets. They were joined by DC, Execration, and Cloud9. And with 7 losses and a tie, it was Hellraisers who became the second team to be eliminated from TI 7.


TI 7's meta saw a much quicker set of games than most TIs with many of the series being 2-0s. Like most years, the true strength of Chinese teams was on full display at TI 7, and as western teams crumbled, a multinational, multicultural, diverse team led by one of Dota’s most storied players rose to answer the call. Here are the major storylines from the playoffs:

The importance of the group stage

The importance of a good showing at the group stages became most evident at TI7, especially in Team Secret’s context. They were forced to start in the lower brackets and an easy win over Execration put them through to the second round. Here they went up against Team Liquid who despite a dropping down courtesy of iG had had a terrific run in the groups. It was an unfortunate encounter and despite winning game 1 of the series, Secret were unable to close it out. TL would eventually go on to win the Aegis after a breathtaking lower bracket run but it would be at the cost of Secret. It’s hard to say what Puppey and co could have done with an upper bracket cushion or if they didn’t have to face the eventual champions.

EG fail to win a single game on the main stage

A win at TI5 followed by a 3rd place finish at TI 6 meant that much of NA's hopes were on EG. But many had predicted that the side didn’t have the right balance of players to face off against the top teams in the competition. Often times, they seemed greedy with both Sumail and Arteezy known for their ability to farm and even Zai on the 4 requiring space. It came down to Universe and Cr1t - who himself didn't seem the most comfortable on the hard support role. Their draft against Newbee in the upper bracket was unlike most EG drafts and the decision to change up their play style didn’t help either as they got crushed by the TI 4 champions. In the lower bracket they reverted back, putting Arteezy on more traditional farmer like the PL and the TB and even Sumail got his hands on the Invoker and the Puck. Against them were Team Empire who had had to enlist Resolut1on as a last minute substitute for Chappie. The CIS team weren’t the most favored but it was their new carry player who stepped up massively, playing Sven in both games as he carried Team Empire to a victory. The Seattle crowd fell silent as their hometown heroes lost to a team no one had expected to do well and it marked the end of the road for the Evil Geniuses.

Ahfu and Gh - Stars from the support position

2 players who shone brighter than other at TI7 were Ahfu and Gh god, the position 4 players for LFY and Liquid respectively. After a dominant showing in the group stages, LFY were taking teams by storm in the upper bracket. 2-0 victories against both TNC and VP allowed them to cruise towards the Winner Bracket grand finals where they fell to Newbee. Ahfu's Earth Spirit became the MVP in the series against VP. In fact, Newbee were so scared of his Earth Spirit that they had to pick it themselves in all 3 games. Team Liquid learned this the hard way in game 1 of the LB finals and were forced to ban it out for the remainder of the series which seems to have played a part in securing them the win.

Perhaps TI 7’s best player, Gh was practically an unknown entity before Liquid picked him up. He showed some good gameplay in the season before TI 7 but it was that tournament where people realized just how good he actually was. His KOTL and Io became first bans for the Chinese teams and even then he showed up on his Earthshaker to help TL win the series against LGD. It’s safe to say that Gh was a big reason behind Team Liquid’s success at TI7.

In the grand finals, Newbee went up against Team Liquid in the classic west vs east showdown. Newbee had made it there via the upper bracket after beating EG, iG and LFY and with a young crop of Chinese players it seemed as if the org would be the first to be crowned 2 time TI champions and Faith a two time TI winner. Team Liquid, on the other hand, had come via the lower bracket where they took down the likes of Team Secret, Team Empire, VP, LGD and LFY. They had gone from strength to strength as they progressed and their playstyle, drafts and level of execution seemed unbeatable.

Game 1 of the finals saw Mind_Control’s NP run havoc n a short 27-minute encounter, quickly forcing Newbee to start banning the hero from there on out. In game 2, Newbee took an early lead going up to 11 kills before TL found any in return. TL were okay to trade deaths for farm on Alchemist and it wasn’t long before Miracle was up and running. Fights were much harder now for Newbee as both QoP and Anti-mage didn’t have the freedom to jump in aggressively in fear of Gh’s Earthshaker. TL took the Aegis and a lane of raxes before slowly wearing out Newbee turning the game around and forcing a gg by the 34th minute.

Game 3 was the longest one in the series but just like the ones before, Newbee were unable to best Liquid. The team created space and time for Miracle’s Juggernaut and with a carry Venomancer on Newbee, time eventually ran out for the Chinese team. Liquid were crowned the 7th TI champions and the first ones ever to clean sweep a grand final. Their victory came with each of their cores shining everytime they were put on a signature hero with the likes of Kuroky and Matumbaman being able to fit into so many styles that gave Liquid an edge over most teams.

?
What we remember TI7 for


TI7 continues to be an iconic tournament and we take a look at what made it such a blast to watch.

Overall, TI7 had some great moments and some even better Dota that made it an amazing watch. This year TI8 hopes to live up to it’s name and hopefully, improve it. This concludes our 7 part series recapping all the previous TI’s.

TI2 - The Empire strikes back