The Rise of SEA Dota – A brief overview of the region’s performance in the 2017-18 competitive season so far. 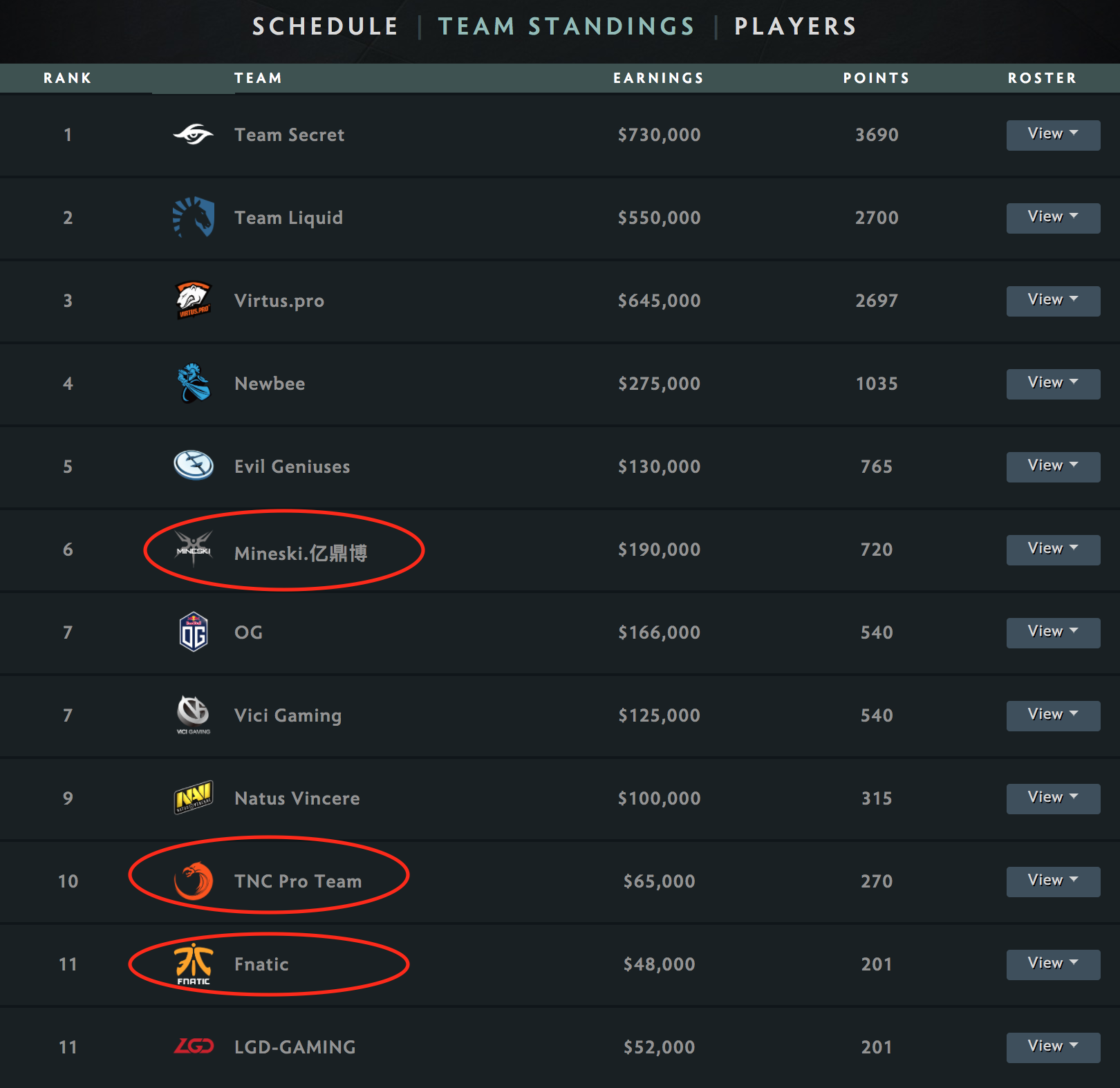 This high, though, wasn’t through sheer luck or beating lesser teams, in fact, SEA teams have beaten elite opposition like Team Secret, Virtus Pro, and OG to get themselves to this position. This is an incredible achievement especially after the poor performance of the region at TI7 where all 3 teams failed to win a single game on the main stage.

However, one could argue that this was a necessary sacrifice to push SEA Dota to the next level, much like Europe’s lackluster performance at TI6 pushing them to new heights. SEA’s failure at TI7 caused several teams to break down and reshuffle, which lead to the creation of 2 of SEA’s top dogs, Fnatic and Mineski and has humbled TNC Pro Team which has pushed them to new heights.

How the Rosters came together

Fnatic retained only two players and brought in European and NA stars EternalEnvy, PLD, and Xcalibur. But the team, which had a lot of hype surrounding them, just kept underperforming until they replaced Xcalibur with Abed and added 343 as their coach. They’ve since started to perform splendidly living up to their fans’ expectations.

Mineski was one of the first teams to officially announce their post TI7 roster changes which reunited SEA legends Mushi and Iceiceice while adding some of SEA’s most talented players - Nana, JabZ, and ninjaboogie to their roster. They clicked immediately going on an insane 20 match winning streak

TNC Pro Team decided to stick with the same roster, which made some sense. They showed a lot of promise in the group stages of TI7, taking games off Team Liquid, Team Secret, Team Empire and Evil Geniuses before being eliminated unceremoniously in the playoffs. This has proven to be a great decision in the long term considering the success they’ve had recently.

The Season so far

The season kicked off on a great note for SEA, as the sole representative of the region, Mineski managed to make it all the way to the finals and went toe-to-toe against Team Liquid, the newly crowned TI Champions even taking a game off them. They lost 3-1 finishing in 2nd place securing 90 Dota Pro Circuit points. 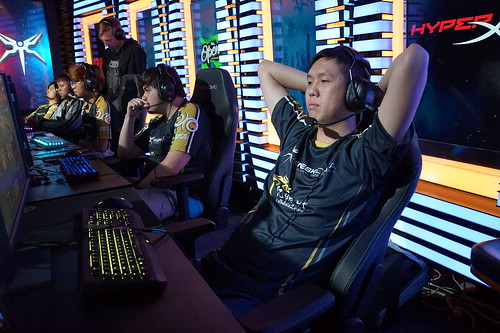 Mineski went one step further in their 2nd Minor of the Season. They beat teams like Evil Geniuses, Navi, VGJ.Thunder and LGD Gaming to become the first ever SEA team to secure the Minor. 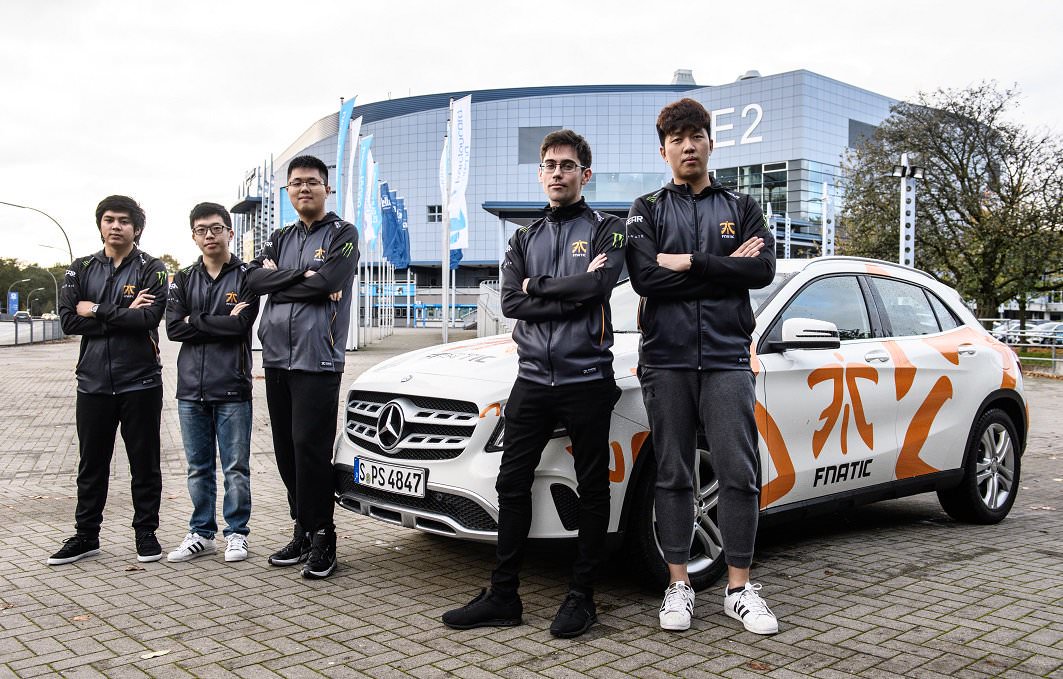 The winner of the SEA qualifier, Happy Feet, was unable to attend the first Valve Major of the new season; Fnatic took their place in the ESL One: Hamburg 2017 as a last minute replacement. However, they crashed out after successive losses to Newbee and Evil Geniuses without winning a single game.

Mineski were the winners of the SEA Qualifiers however they opted out of the tournament citing personal issues with one of their players that interfered with their schedule. A commendable move which cemented Mineski as a team which believes in sticking together through thick and thin.

Thus Fnatic, lucked their way into yet another tournament yet they failed to win a single series this time around as well.

Mineski were once again the SEA representatives by virtue of winning the qualifiers. Their performance at the main event was poor as they were eliminated in the playoffs losing back to back matches versus Vici Gaming and Complexity despite a respectable performance in the group stages.

Fnatic decided to switch things up and changed their roster bringing in the 1st ever 10k MMR superstar Abed as well as veteran coach Adam ‘343’ Shah. The resulting change in performance was near instant. Fnatic dominated the SEA qualifiers taking down Mineski and TNC Pro Team to make it to the Major.

However, Fnatic had to go up against Team Liquid in their 1st match and got destroyed by Kuroky and company. They were then eliminated (2-1) at the hands of a resurgent Navi squad. 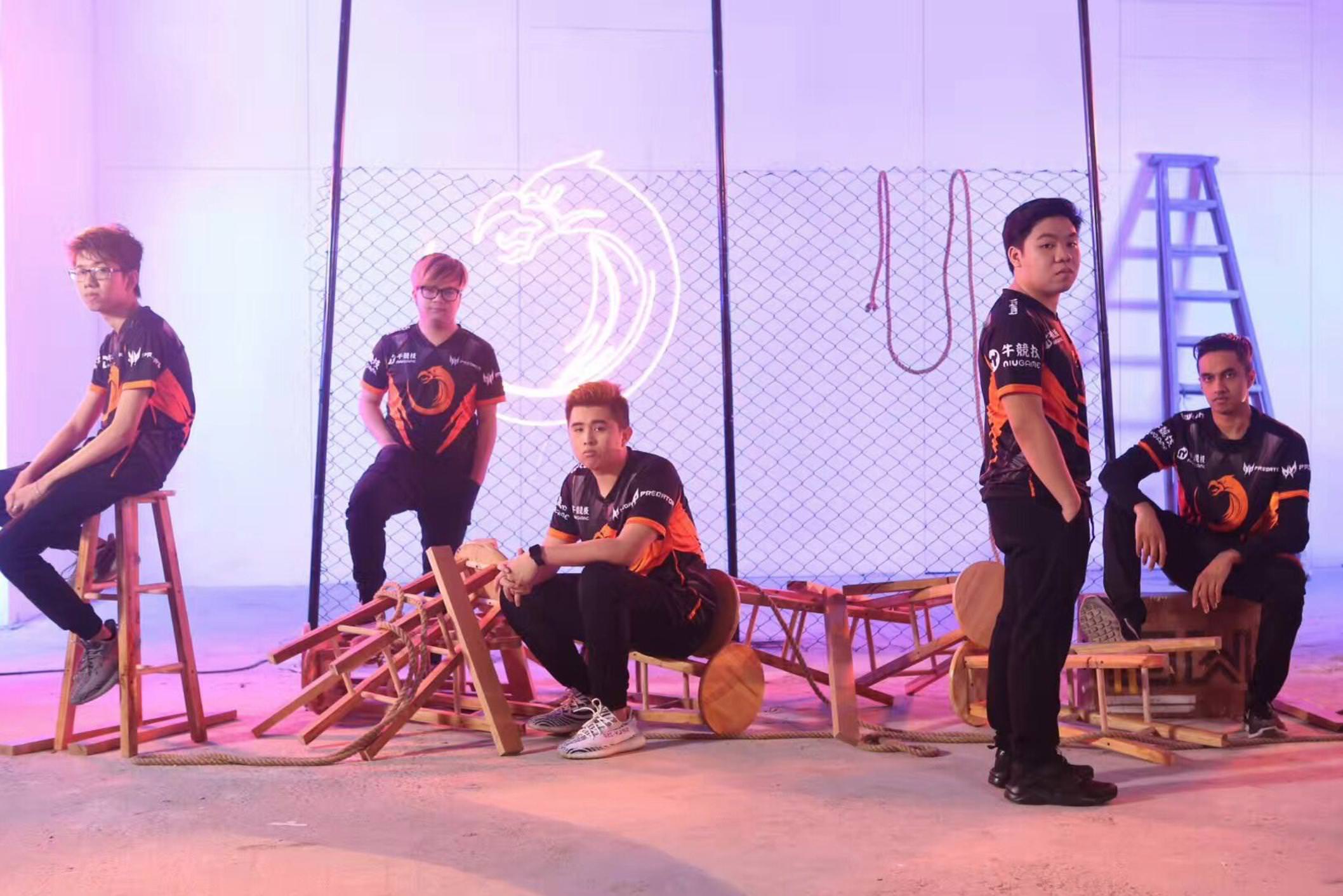 The points table had begun to take shape and SEA had only one team in it (Mineski which had also fallen flat after their first 2 tournaments). Things weren’t looking great for SEA when MDL Macau rolled in.

TNC Pro Team’s first LAN appearance was happening in China where they’ve almost always done well. That trend continued with this tournament. They had a great group stage performance beating teams like LFY, EHOME and LGD and finishing on par with Virtus Pro and Navi before moving on to the playoffs.

There they went up against Virtus Pro in the Semifinals and clobbered them in a 2-0 drubbing before moving on to the Grand Finals where they would take on OG. OG beat them 2-0 with ease causing TNC to finish as the runners-up of the MDL Macau Minor 2017. 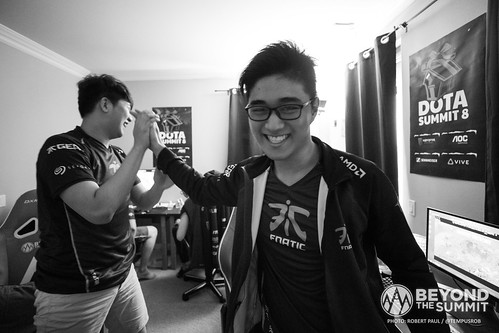 Fnatic won the SEA qualifiers owing to their new squad gelling well together after the Abed acquisition. They had to beat out TNC Pro Team and Mineski in 2 very tough series’ to make their way to the Summit house.

Once there, Fnatic surprised almost everyone with their crisp play and drafts, topping their group and moving on to the playoffs with relative ease. There, we saw a systematic dismantling of OG as they made it to the finals to take on CIS Powerhouse, Virtus Pro.

While they did show some promise and put up a decent fight, Virtus Pro was too strong for the SEA team and hence Fnatic finished in 2nd place and secured their first points in the Dota 2 Pro Circuit table.

2018 will bring in a fresh batch of tournaments for SEA teams to further improve and build up some momentum for TI8 whilst also securing direct invites through the Dota Pro Circuit points system.

Understandably, SEA teams haven’t really been given much preference when Valve handed out invites for tournaments past. In fact, the last time Valve has given the SEA region more than 1 invite was way back in TI3 where they invited Orange Esports, Zenith, and MUFC. A transparent point based system courtesy the Dota Pro Circuit points represents a prime opportunity for SEA teams to secure direct invitations.

The only event in the Pro Circuit calendar that will not be a Captain’s Mode tournament, The Captain's Draft 4.0 will also be the first tournament of 2018. Mineski will be the SEA representative in this event.

With a player like Iceiceice who was the architect of the no-ban draft strategy and the versatility of Mushi and Jabz in their roster, they have a fair chance of winning this event and at the very least will look to secure some qualification points.

The first SEA Major of the Dota 2 Pro Circuit and the first Major of 2018, Galaxy Battles II, will have two 2 SEA teams participating in this event. TNC Pro Team (Direct Invite) and Mineski (SEA Qualifier Winner) will represent the region in the Philippines.

This will be TNC’s as well as Mineski’s first major appearances of the season. Hopefully, atleast one of these two teams with the backing of their home crowd can push on and do well to secure SEA’s first points in a major.

The first SEA Minor of the Dota 2 Pro Circuit will have for the first time, 3 SEA teams participating in it. Fnatic and Mineski have already been directly invited to the tournament with one more team from the SEA regional qualifiers joining them.

As a matter of fact, the SEA qualifiers for ESL One Genting 2018 are happening right now. Unfortunately, there is no official stream but you can tune into the games via DotaTV in the Dota2 client.

There are of course plenty more to come, but most of them haven’t yet started the qualifiers nor have they announced the invites so speculation will be quite inaccurate. 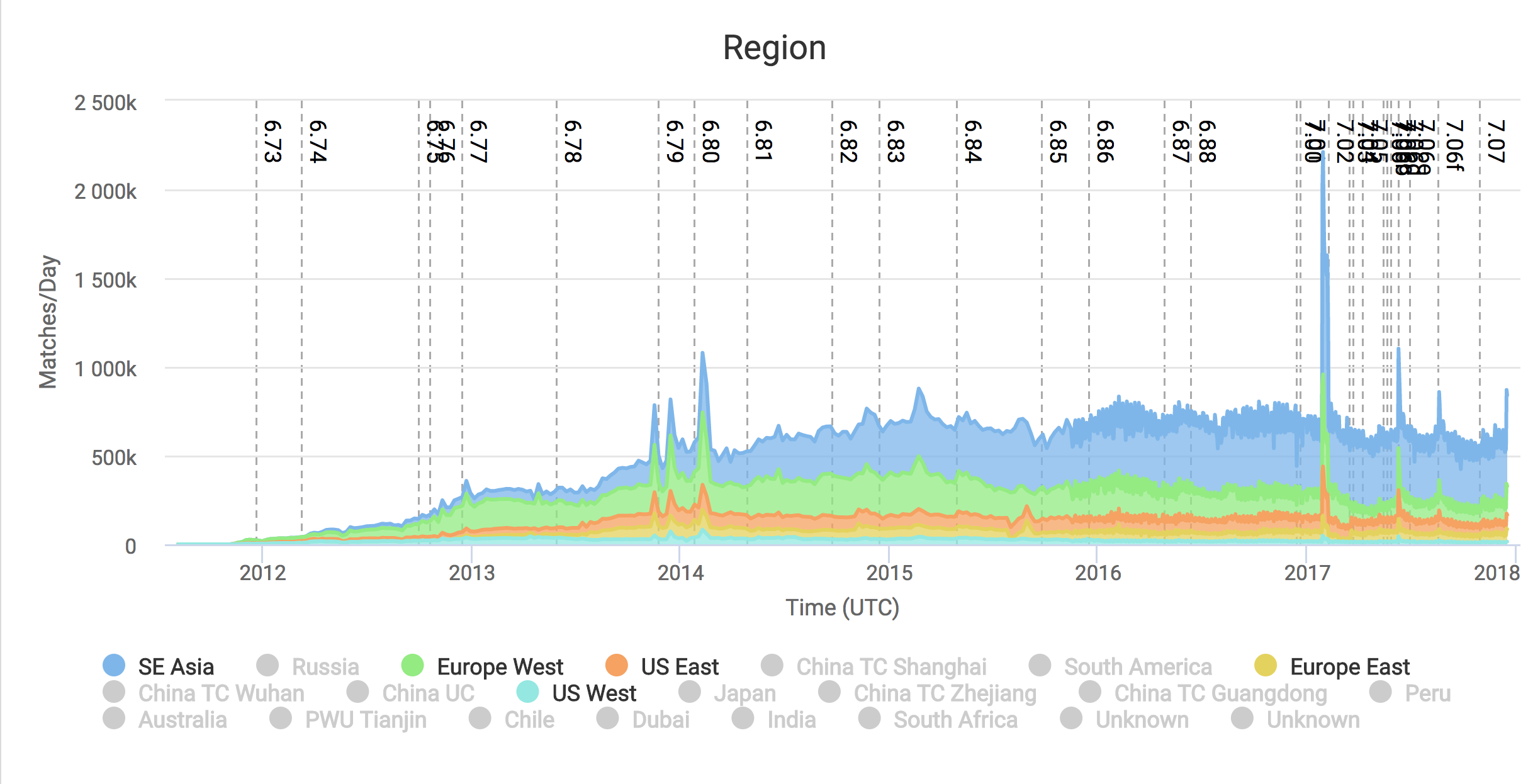 For the first time in a while, we have 3 top tier teams who can take the fight to the best teams in the world and on occasion even beat them! It is also encouraging to see teams like Happy Feet, Fire Dragoon and Geek Fam nipping at the heels of the big three.

While there are a lot of points still to play for, SEA has a great shot at landing a sizeable number of TI invites, and will no doubt be a significant threat in every tournament for the rest of the season.
About UsContact UsServicesRSS
DisclaimerAdvertise With UsArchiveEditorial Team