Now, two action-packed days later, we have our first and only representative of the SEA region in the tournament, Mineski.Pro Team. The team has stood head and shoulders above every other team taking part in the qualifier thanks to some stellar drafting from JabZ and some innovative offlane play from iceiceice.


Let us take a look back at how things unfolded in the SEA Regional qualifiers. 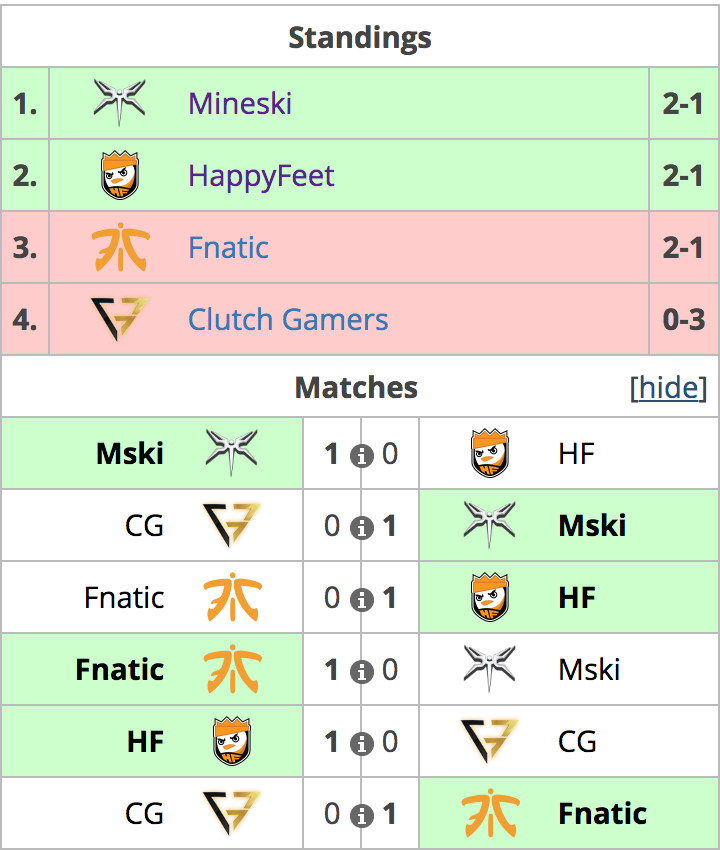 We saw Mineski kick off the group with two relatively convincing victories over Happy Feet and Clutch Gamers before losing the game of the tournament against Fnatic, falling to a phenomenal Terrorblade performance from EternalEnvy. Their global lineup managed to stretch the game to well over 75 minutes, but it was all for naught as they would lose the game on the back of Mushi getting caught out of position and killed off without buyback.

Unfortunately, this extended game proved to be Fnatic’s undoing (See below). They won their game against Clutch Gamers as well but a somewhat surprising loss to Happy Feet landed them with a 2-1 Win-Loss record.

Happy Feet too ended up with a 2-1 record after upsetting Fnatic and convincingly beating Clutch Gamers while losing to Mineski.

Clutch Gamers, unfortunately, experienced some internet connection issues thanks to a Hurricane in the Philippines. They ended up playing in suboptimal conditions in a LAN café and their performance suffered as a result. They lost all 3 games and were knocked out of the tournament.

Group A ended with three teams (Mineski, Happy Feet and Fnatic) on 2-1 score lines. With no rules and regulations information provided by PGL, we assumed that the usual tiebreakers system would be used to decide who would go through to the playoffs. But Fnatic announced that they were eliminated via a timestamp ruling.


For those unaware, time rating is a ruling that takes into account the time it took for teams to win their games and use that to resolve situations such as ties in groups.

However, this is very unfair to certain teams. DatDota’s noxville explained why it is so.

Time rating is literally the stupidest thing for Dota 2.
Edit: Let me expand on this a bit so it's not just a standalone unjustified flame. When playing Dota 2 with time rating, you're playing a different game. The game is no longer to 'kill the enemy ancient', it's suddenly either 'kill the enemy ancient as fast as possible' or 'prevent the enemy killing your ancient for as long as possible'. This might seem like a small nuance, but it fundamentally changes the way you play the game - you're less likely to try draft more late-game orientated drafts (which might be what your team is best at), and if you're ahead in terms of games (i.e. you don't need to win your final game provided you lose very slowly) it creates an incentive for you to play for a slow loss, something very difficult to counter.
I'm sure someone will come along and try draw a comparison between 'time rating' and 'goal difference' in football (soccer), or point difference in other traditional sports tournaments . (It's probable/possible these same people would advocate for getting 3 points for winning a two-game-series 2-0). In either regard, it's not as simple as they make it out to be - scoring goals in football is a direct sub-objective of winning the game. Dota 2 has no such sub-objectives, the only objective is 'killing the enemy ancient' (kills, towers, gold, etc are all meaningless statistics). The better comparison for 'time rating' would be resolving every soccer match end-game draw by saying the team with the first goal wins - utterly ridiculous.

Due to heavy community backlash, the time rating rule has been removed from the NA, SA, CIS and EU qualifiers. But it was a bit too late for Fnatic, with a low time rating. Hence they were eliminated. Happy Feet and Mineski moved on to the playoffs. 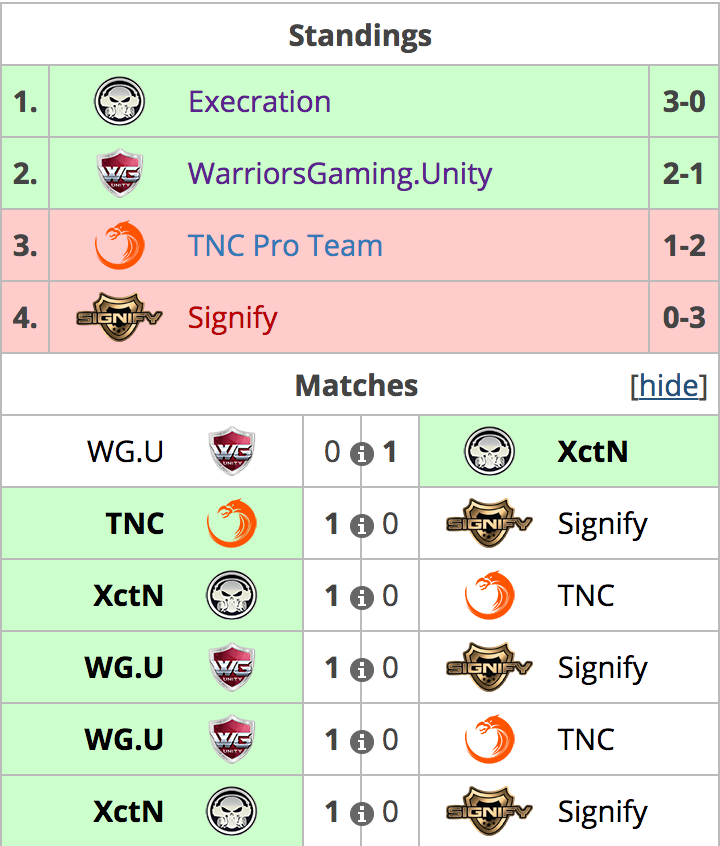 This was the group in which our boys from India, Signify were placed in. They kicked off their journey with a loss to TNC Pro Team. The game was close but Raven’s Anti Mage got out of control way too quickly for Signify to handle. Although there were a couple of major missteps from TNC Pro Team, Signify just weren’t able to take advantage of those mistakes and ended up conceding the game.

But TNC Pro Team would then go onto lose their next two games to WG.Unity and Execration getting themselves eliminated before the playoffs after finishing with a 2-1 record.

WG.Unity finished with a 2-1 record after losing to Execration but taking down TNC Pro Team in a one sided stomp and making a huge comeback against Signify. Their teamfight heavy lineup against Signify included an Ancient Apparation, a Meepo and a Venomancer. Signify just couldn’t deal with the damage these heroes were outputting in the lategame.

Execration were very impressive, they beat all three teams in their group and finished with a clean 3-0 record.

Signify, although impressive, didn’t manage to win a single game in the SEA regional qualifiers which disappointed a lot of their Indian fans. But their performances were still very impressive. The No_Chanc3-Owa combination is finally clicking; Crowley and BlizzarD have stepped up their games to match that. I would be very surprised if Signify’s performances don’t improve by the time the next Major/Minor qualifier rolls in.

Thus, Execration and WG.Unity were the two teams to advance to the playoffs from Group B.

After their remarkable 3-0 record yesterday, many expected Execration to waltz their way past the Happy Feet squad. But it wasn’t that straightforward, Execration had to work and toil for their 2-1 victory over Happy Feet with all 3 of their games stretching past the 40-minute mark.

On the other side, Mineski systematically disintegrated the WG.Unity squad who looked like they were clueless against the pure mechanical skill and drafting prowess that Mineski showcased. They dominated all 3 lanes in both matches and their transition into mid-late game phase was flawless. They were then set for a duel with Execration for a place in Bucharest.

The Grand Finals was almost a reflection of Mineski’s previous series. They absolutely destroyed Execration over the course of two games, with iceiceice continuing to play unconventional offlaners, this time a Visage, in both games.

The first game ended just after the 30-minute mark with Mineski up 38 kills to 10 and diving Execration in their base. The second game was even more of a stomp for Mineski as they ended up with 44 kills to 16 just before the 30-minute mark after a very impressive Sniper performance from Mushi.

Mineski has become a very scary team in the SEA region. Their mechanical skill and decision making is next to none. iceiceice is now starting to show us why he is considered one of the best offlaners in the world and Jabz’s transition to the 4 position support role has completely revitalized him. Nana and ninjaboogie have proven that they are two of the most talented upcoming players in the scene. And then there is Mushi, the legendary SEA veteran is just the type of leader that this talented team needs to elevate themselves to the next level. They will look to carry this momentum into the main event which takes place later next month.


They will now travel to Bucharest and take part in the PGL minor where they will go up against EG and LGD amongst others on the 19th of October, 2017.