The MPGL Regular Season comes to a close

After 3 long weeks of action, 56 group stage matches, and 2 breakers, we finally have our 2 LAN Finalists: Clutch Gamers, and Execration. We also saw the first eliminations from the MPGL in the form of Signify, MEGA Aorus, and Team No Throne. All three teams had some memorable showings, but they just couldn’t make the cut in the clutch.

The past three weeks have been filled with top quality Dota and surprising upsets. 99 heroes have been picked thus far. Read on for a look at the group's final standings, 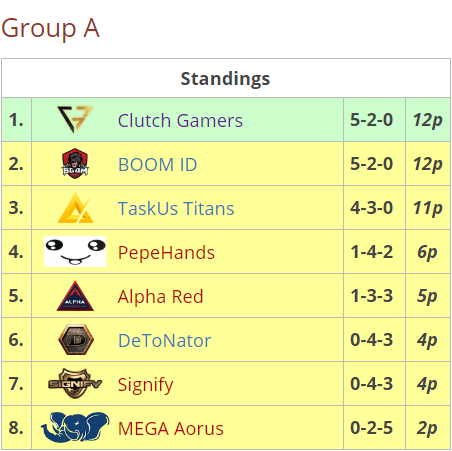 It is no surprise that Clutch Gamers and BOOM ID were the best teams in Group A. Clutch showed near-perfect execution of their strategy, a calm mind when they were at a disadvantage, and demonstrated why they are truly one of the best teams in the tournament.

BOOM ID, who has had a drop in performance after Mohammed “inyourdream” Rizky left the team, nonetheless entered the tournament with a bang, proving that the Indonesians are in it for the win.

But it was Clutch Gamers who came out on top in the Tie-Breaker matchup, an epic 1 Hour+ brawlfest where teams went blow to blow before reaching a conclusion with Clutch Gamers taking a decisive fight to win the game.

Neon Esports was the other team that delivered a surprise. While many expected them to do decently well in this tournament, they surpassed all expectations and almost directly qualified for the main event. A surprise draw against PepeHands pushed them down towards the playoffs. 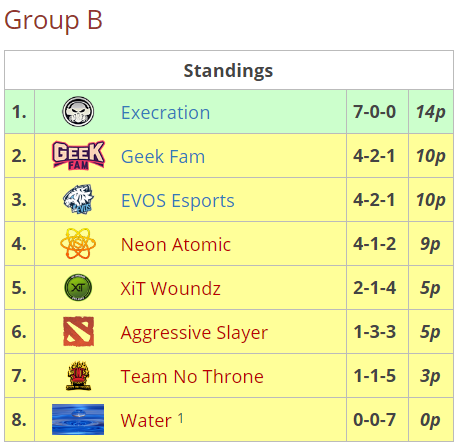 Group B was far more one-sided. Execration quite simply dominated proceedings going 7-0 in the Group Stages, not dropping a single game and easily securing a spot in the main event

Geek Fam, on the other hand had a rough run. They failed to take a game off Execration and were shaky in draws against EVOS Esports and Team Aggressive Slayer. They need to improve upon their results by the time the playoffs roll through.

Aggressive Slayer, a team from Laos, has been the surprise showing of the tournament. They’ve delivered in one of their first-ever appearances in the International stage, taking games off teams like Geek Fam, Team No Throne, and XiT Woundz.

With 2 teams moving on to the Main Event, and 4 teams getting eliminated from the event, the remaining 10 teams will be playing in the playoffs for a chance to compete in the main event. The details of the playoffs are still yet to be revealed.

Stay tuned to AFK Gaming for more updates from the MPGL Asian Championship.