The MongolZ mark their return by announcing new roster

The MongolZ just announced a new lineup via their Facebook page. The new roster is an all Mongolian lineup which is formed just weeks before the start of the Berlin Major - Asia Open Qualifiers.

The new roster consists of the following players,

The MongolZ are making a comeback into competitive CS after losing their roster to Storm Rider last year in September. After not doing too well for themselves and some disagreements with the management of the Chinese organization; Storm Rider parted ways with its roster.

Two of the five players, maaRaa & neuz made their way back to MongolZ as part of their new line-up. They were quickly joined by the most accomplished and well known Mongolian player Machinegun.

Machinegun has previously played for MongolZ on two occasions. The player has not been a part of a Mongolian line-up for quite some time but has returned back to MongolZ after playing for Eclipse and Rex Regum Qeon. The team will be looking up to him as he is the most experienced of the lot.

The last two players are temk4wow & Annihilation both of which are unknown with recognition only in the local Mongolian region.

The team might have been practising together for some time now but their announcement comes just a couple of days after Gan-Erdene ‘Dobu’ Batbold took to Twitter to announce his participation in the upcoming StarLadder Berlin Major - Asia Open Qualifier with an all Mongolian roster consisting of Kabal, nin9, tsogoo & ncl. 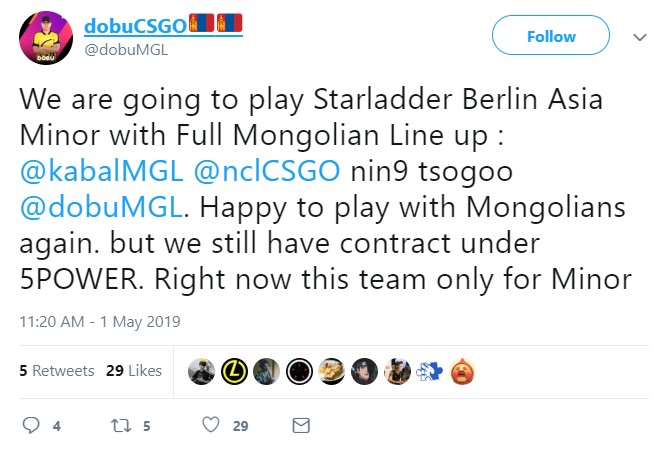 Let’s see which Mongolian team comes out on top and makes a mark as the Mongolian representative. Both the Mongolian teams will be seen in action in the upcoming StarLadder Berlin Major - Asia Open Qualifier starting on 13th May.