20o, Jul, 2016
It’s been a week since Valve made a formal announcement regarding the use of their API by gambling websites and it’s been a confusing time for everyone. They have come under heavy criticism after counter strike player, John Mcleod filed a class action lawsuit against the company for knowingly allowing, supporting and sponsoring illegal gambling through the use of skins and cosmetics which can be traded outside the game as real currency. 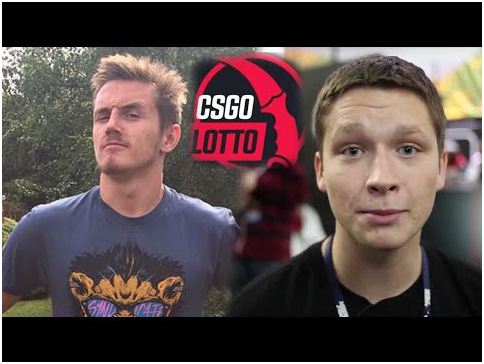 The announcement also comes in the wake of a major gambling scandal involving betting site CSGOLotto. The owners Trevor "Tmartn" Martin and Tom "Syndicate" Cassell were implicated in a case where both were promoting the site on their youtube channels without disclosing the facts about their ownerships and associations with it. It’s definitely not the first time the eSport betting industry has come under fire, and previous instances of match fixing and fraud will also have forced Valve’s hand. In 2014 the NA CS:GO scene was rocked after reports of match fixing and deliberate throwing of games by members of the now infamous organization, iBuyPower.

Dota 2 has also seen its fair share of controversy. In 2014 members of Arrow gaming, including high profile names like Kok Yi “ddz” Liong were punished after getting caught in a match fixing scandal. The players were banned indefinitely from all Valve events. In 2013 the “322” incident involving CIS team Rox.KIS also came to light and Alexey “Solo” Brezin was implicated for  throwing a game for personal profit. He was given a lifetime ban as well but it was later reduced to a year. The 322 reference is now used to talk about bad plays and throwing in general and it was the amount that Solo bet against himself that immortalized the number as a Dota 2 meme.

How big is the eSports betting industry?

According to reports the betting industry for CS:GO is valuated at around $2 billion, much larger than the value of the eSports industry directly. Skin betting as well as cash betting on games like CS:GO, LOL, Dota 2, StarCraft and other big titles means that the industry is a fast growing one. CNBC reports that by 2020, $23.5 billion will be the amount being bet on eSports.  With new titles being added each year and the rising popularity of eSports these numbers aren’t too hard to believe.

"There is no reason why e-sports should not become a meaningful and profitable part of a sportsbook's portfolio, E-sports tournaments are competitive, exciting, fast-paced events, with a live crowd creating atmosphere, just as at a 'traditional' sports event like a football match.”
-Lorien Pilling, research director of Global Betting and Gaming Consultants
(Source : CNBC) 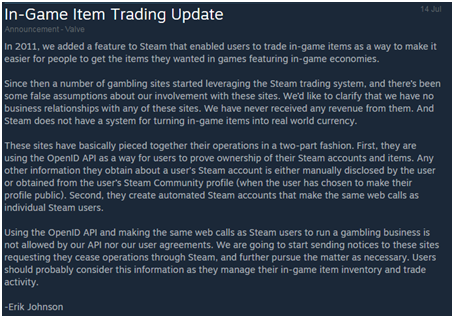 the statement that Valve released a week ago. It comes from Erik Johnson one of Valve’s top guys in charge of business development. He talks about the illegal use of the OpenID API(this is basically the interface used by Valve to make their platform) by the websites to take account information from the users Steam ID’s. He also talks about the how these websites create bots and automated id’s which are used as middlemen during transfers. They stress upon the fact that they aren’t tied in any way to any of the betting websites nor do they makes any money out of the global betting scene. Earlier today, Valve released a list of websites that were in violation of the Steam Subscriber Agreement. 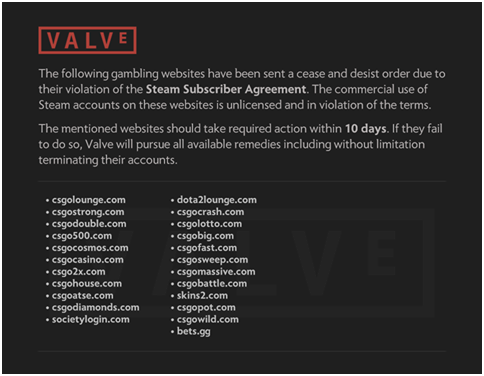 While it’s still too early to talk about the effects and long term consequences, it’s not so difficult to foresee the impact this decision will have upon the community. Can the betting industry come back from this setback? Will Valve be releasing further statements and guidelines to ensure a more long term and wholesome solution? Will the decline in the gambling audience lead to dip in the overall growth of the scene?