The Kappa Chronicles - An interview with Akshay Sinkar

6th, Feb, 2018
One of the most consistent and versatile players of the country, Kappa has been around for a long time. He has seen it all and done it all it certainly doesn't come as a surprise that he was chosen to be a captain in the first season of U Cypher. The Akramaks have faltered at a few places but are slowly ironing out the kinks and the boisterous bunch of old school players love to get in your face and dominate. Having been bred in an era when mind games and smack talk was a integral part of the game, these guys have been entertaining to watch. Here we are in conversation with Kappa. 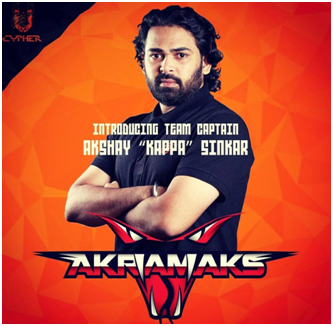 Hi Kappa! Tell us a bit about your team, the Akramaks and how they've been performing of late.

My CS team has not yet performed as expected, it’s average. The single players are playing balanced, Sagar has been a Fifa player for a long time now and unfortunately he has been getting pacers constantly while he plays spinners best which he showed in the last match against Yodhas hitting 6 sixes playing spinners and Shekhar is an XBox player which might be the result of his underperformance( he has won 2/5 matches) and I am expecting a better playout in the next stage. The DOTA whereas has defeated the Yakshas- who are the strongest team on-paper but they are yet to do some actual knockout. Let’s see what happens in the next round robin.
You chose Manan, Mithil and sMx, 3 very senior players in the scene and people who you've played with before. It seems to be working well for you guys. What was the strategy you went with into the draft and on a scale of 1 to 10 how happy were you with your team after it?

My strategy was to get my friends whose gaming style I knew. On a scale of 1-10, I am at a six of my satisfaction of the final team. The Tekken and DOTA players are all underdogs according to the Indian scene. 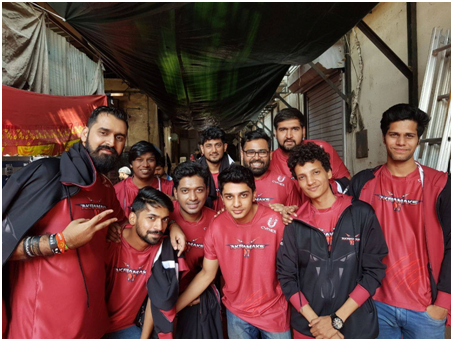 Source: Sagar 'Lovesx' Vyas
Unfortunately, your Dota team isn't having the best of times in the league. What do you think is going wrong for them?

The DOTA team has won against Yakshas who are the strongest DOTA team yet in UCypher and has given a tough match to the Yodhas as well. But I think the problems that are affecting are ego issues and no one has a leadership quality to come forth and give a lead that’s required.
The format of U Cypher is quite long and comprehensive. And it also includes 4 titles who are very different from each other. As a captain is it difficult to manage players of other titles, especially considering they might not necessarily respect you or understand you?

The long format is good actually as it gives everyone a chance to prove over so many matches. Because there was different games I chose friends, as we understand each other especially Tekken, Real Cricket and CSGO players, and I took 2 senior players- Sachin’ Grap3_SoDa’ Nayak and Megh ‘Make^Believe’ Shah. Everyone respects me but the respect and coordination needs to be there between the other players as well.
Earlier this season, the Marksmen got a clean sweep over the Akramaks. How do you guys plan on responding in the second half of the season?

With a revenge clean sweep. 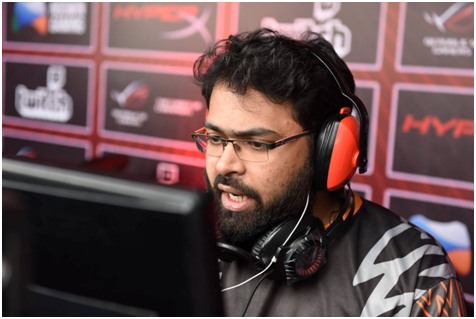 Source:ESL India
You are one of the most experienced players in the country at the moment and at U Cypher. How do you think the Counter Strike scene has changed over the years? In what ways is the scene still the same? And what changes do you want to see in players and teams eventually?

There’s a lot of improvement in the gaming scenario. The difference is that the casual players are also coming forward and playing in competitive tournaments. CS 1.6 competitions was offline earlier mostly which restricted a lot of players. With CSGO players can play online from home and the technology has connected players and has also improved their gaming and the connections between gamers.  The gaming scenario has actually improved a lot, it’s not the same anymore. In 2017-18 there has been investment of crores on Indian gaming.
How have your friends and family responded to you being on MTV?

Thanks a lot for your time. One last thing before we let you go. Tell us how the Akramaks chant 'Haq Se' was introduced and who was behind it!

I was told to think of a team slogan but it completely went out of my mind. On the day that we actually had to shout it, my teammate Sagar ‘LovEsX’ Vyas came up randomly with the ‘Haq se’ chant. But honestly, it fits us.
About UsContact UsServicesRSS
DisclaimerAdvertise With UsArchiveEditorial Team