The WESG 2018 - World Finals is finally here. The mega event starting tomorrow has become an annual affair with teams from all around the globe taking part in this unique Olympic style event.

This time a total of 32 teams were supposed to battle it out in Chongqing, China but due to some visa issues along with various other personal reasons, five teams backed out a week prior the start of the event, which is taking place from 11th-17th March with a total prize pool of $890,000.

The event now reduced to 27 teams has not changed its structure of operations, continuing to go ahead as planned in order to stick to the schedule. So the event will kick off with the Group Stage through which 16 teams will qualify onto the Playoffs.

Out of the 32 teams which were originally taking part in the event, 29 qualified through various regional qualifiers while 3 were directly invited to the event. All the participants were divided into 8 groups of 4 teams each.

Though the event has faced the departure of 5 teams the groups still remain the same. Following are the 8 groups consisting of all the teams, shuffled in-between them. 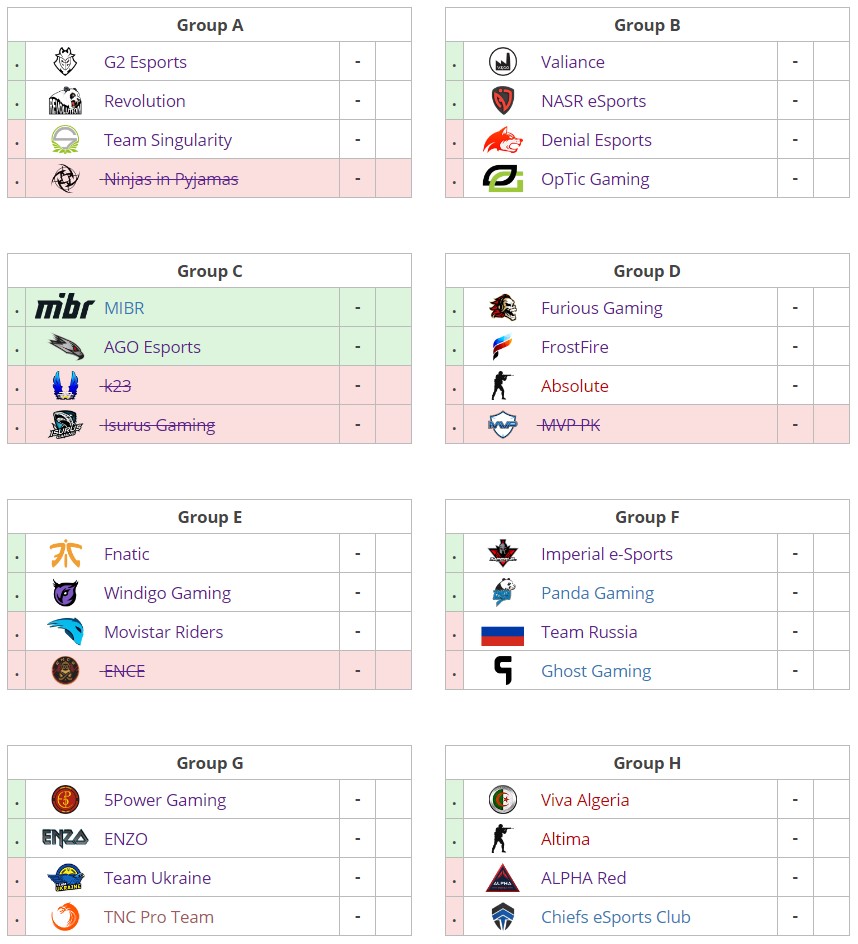 Every team in each group will play the other remaining teams within the group, once each. Every match-up will be a best-of-two series. The top two teams from each Group will qualify onto the Playoffs.

The playoffs will follow a direct elimination format where each game will be a best-of-three series. The last standing team will be walking away with $500,000 with the runners-up obtaining $200,000 followed by the third-placed team getting $100,000 while the team behind them earn $50,000.

It is quite clear that not all the 32 teams participating in the event are equally strong. Some teams have more experience and skill on their side with the inclusion of highly rated players who are a part of tier one organizations. While some teams are not so fortunate as they represent smaller regions that have still not broken out properly into the CS scene, hence lacking that polish which is present in bigger teams.

Keeping this in mind it is quite easy to predict some of the outcomes from the Group Stage, there is always a chance of an underdog causing an upset which I will be taking into consideration but all the outcomes that I predict will be backed by facts and sound reasoning. And if you beg to differ then you can always voice your opinions as comments below!

If NiP wouldn’t have pulled out, it would have been an easy prediction to make with NiP and G2 being the ones most likely to go through from the group. But now with NiP out of the equation, the competition between Revolution from Vietnam and Singularity representing America has suddenly increased.

G2 will be surely qualifying for the Playoffs but it is quite tough to pick the runners up from this group.

This group will see a lot of closely contested matches with NASR and Valiance having great potential of shaking up Denial and Optic, which are the more preferred teams when it comes to qualifying for the playoffs.

Well as luck would have it, MIBR and AGO Esports will be getting a free pass into the Playoffs as the other two teams, K23 and Isurus Gaming have stepped out of the event due to various reasons.

With MVP PK backing out FrostFire now has almost no competition in the group, making them the strongest out of the remaining three. But an upset is likely on the cards from Furious Gaming for the second place. Absolute is still quite young and are slightly less experienced when compared to the other three teams.

ENCE after having a fantastic run at the IEM Katowice 2019 is taking some time off to relax, which gives Fnatic, the reigning champions, a chance to place first in the groups. The second place can go to either Windigo or Movistar Riders who are both balancing well on either side of the scale.

Team Russia with players like Dosia and Seized will have a comfortable time seeing themselves through the group stage. The other team to qualify will be Ghost Gaming, it is tough to say who will finish first in the group but both are surely going to qualify nonetheless.

Team Ukraine will be facing off against three teams from Asia so it is quite uncertain how well will they actually perform against them. There will be tough competition from both 5Power and TNC and though BTRG.HK is not really a strong team, the presence of Freeman can never be ignored.

This group is going to be really competitive, I will go with TNC and 5Power as the two qualifying teams but in reality, it is too tough to confidently predict the outcome.

The teams from down under, Chief Esports Club along with Alpha Red are two teams that are sure to make it through to the Playoffs. Not much can be said about Altima but Viva Algeria has the potential to cause an upset by slipping in a second place finish.

This concludes the predictions for WESG 2018 - World Finals. Hope the insight was helpful and adds on to your viewing experience. Comment below your predictions for the Group Stage and which team will you guys be supporting!

The matches starting tomorrow will be streamed live on twitch for the English broadcast and on Huya for the Chinese one.