Earlier this week, two Dota 2 players from the Philippines, Carlo “Kuku” Palad and Andrei “Skem” Ong were embroiled in controversy after using a slur term, targetted at Chinese people, in their matches.

Post these incidents, Skem was reprimanded, and fined by coL management almost immediately. He later posted an apology on his Twitter account. However, Kuku got himself involved in more controversies by purporting false statements in Weibo, after posting an apology on his personal Facebook account.

Following these incidents, the Chinese Dota 2 community has been urging Valve to take some action against the two players who have made these comments. Reddit user yyhfhbw made a post on /r/DotA2 detailing the community's uproar.

"So nowadays everybody thinks its OK to say that to Chinese teams? Who the f**k do you think you are??? I'm so done"

Shortly after, Lu "Somnus?M" Yao simply wrote: "sbdongxi"  on his weibo which translates to "f**king piece of s**t" 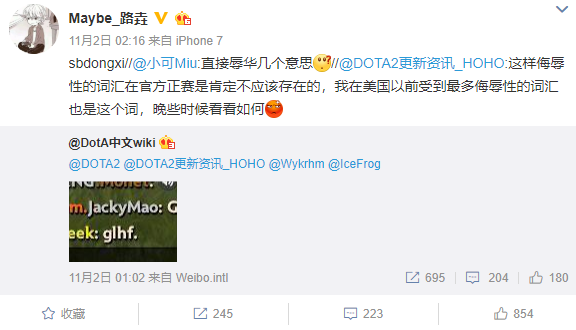 “Recently, two racist incidents against China happened, one from team coL in a Minor match and the other from team TNC in a pub game. Multiple parties have reported these. Unfortunately, no reaction has been made from Valve's end. We are very disappointed with how things end up and Valve's neglectful attitude!

Respect is a mutual thing. Hereby Team Aster promise that, if any racial statements ever came from our players or our staff, they will be punished severely, and publicly. And we welcome the supervision from everyone. In the upcoming tournaments, we will follow the #RESPECT campaign from UEFA, and add the suffix RESPECT to IDs of our players, until pro players from all around the world attach importance to this matter and until no such thing ever happens again.

With Valve's dereliction of its duty at the moment, we hope and urge, matters like fair competition and racial equality be properly addressed ASAP, with the community's joint efforts.”

Vici Gaming also issued a statement on this matter.

The team against whom Skem used the inappropriate words, Royal Never Give Up also made a statement on this:

The spirit of esports teaches us to respect all competitors on the field. Prejudice will never have a place in our community. It is our hope that @steam_games @DOTA2 will confront any unsportsmanlike behavior of those players who involved in racial discrimination. #dota2 pic.twitter.com/L92RnYyUyd


In the meanwhile, the Dota 2 Review page on Steam has been bombarded with negative reviews from steam users.