In terms of competition, the Taiwan Excellence Cup 2018 looked to be the most stacked of Indian Lans, but in terms of results, we saw nothing new as Signify walked over the rest of the competition to continue their unbeaten streak in Indian LANs. The competition saw Signify, ROG Titans, LXG Esports and Wipeout all make it to the top 4 but Signify proved to be a cut above the rest as they have time and again across the past year.

LXG played well in their matches and looked capable to beating the top teams, but were unable to close out against both Signify and ROG Titans despite being ahead in both games. Wipeout meanwhile, were able to take down the ROG Titans, pushing them down to the lower bracket. However, a well-executed Drow Strat allowed the Titans to take revenge as they overcame Wipeout in the lower bracket to reach the grand finals.

The grand finals saw Signify going up against the ROG Titans like many of the past LANs and the result was no different. While Crowley was looking to continue his TE Cup dominance after having missed out last year, this was the second consecutive finals for the ROG Titans who had lost to Team Buriza last time around.

The finals was a short-lived affair as Signify got a relatively easy 2-0 over the ROG Titans to take the trophy. In game 1, Swifty’s Tiny was able to take a significant advantage in the laning phase, and used this to create space for his other cores. While the two sidelanes of ROG Titans did well, their Underlord and MK were unable to have much impact as Signify controlled the map well using Swifty to take quick pickoffs and smaller skirmishes. In the end, BlizzarD’s farm became too much for ROG to contend and Signify had little trouble in closing out the game with 3 farmed cores.

Game 2, saw Signify attempt a high tempo aggressive draft with a Slark, QoP and Omniknight. While they suffered in the laning phase, one bad fight allowed Swifty to make a big comeback and he took control of the game from thereon out. Even BlizzarD was able to find multiple pickoffs on the weak supports, for whom it became impossible to leave the base. Signify found too many kills in such a short span of time that the ROG Titans were unable to gather their thoughts and make a hold, and tapped out. 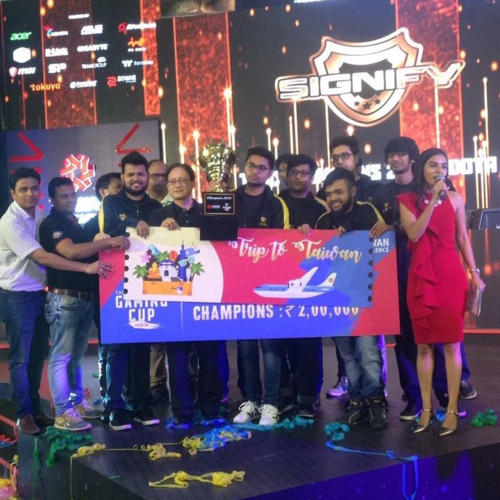 Another win for Signify, who didn’t have their coach with them this time around, but were able to find the win without any real pressure. Another grand finals loss for the ROG Titans who still don’t look like they can take a series off Signify at the moment. Signify take home the trophy and the 2 lakh cash prize while ROG bow down to another second-place finish.