The ESL Pro League Season 9 - Finals came to an end with Team Liquid being crowned as the champions. The boys in blue took the five-match series ‘3-1’ in their favour to win their first ever Pro League title and secure themselves a third victory in the Intel Grand Slam Season -2.

Last, but certainly not least, thank you to all of the French fans who came to support us. You gave us a truly unforgettable experience in Montpellier.

Team Liquid were the favourites going into the finals against G2 Esports, who have had their dream run in the league so far. But it all came to an end today after Liquid gave it all that they had just to crawl through the finish line.

The finale was totally worth it with both the teams putting it all on the line but Liquid held the upper hand in the end, edging out that fourth game to walk away with a victory.

Both the teams had already faced each other in the finale of the GG.Bet Cologne Invitational 2019 earlier in the week and though Liquid was eyeing a victory to ensure their dominance over the throne, G2 were just looking for revenge along with a title to add to their name after a very long time. 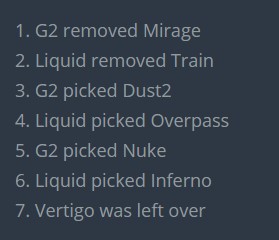 They started off selecting their strongest maps to commence the fight for the coveted trophy, Liquid was able to cause a huge upset upfront by snatching Dust 2 away from G2. Though Liquid had the clear upper hand, G2 hustled hard to take the match into overtime. 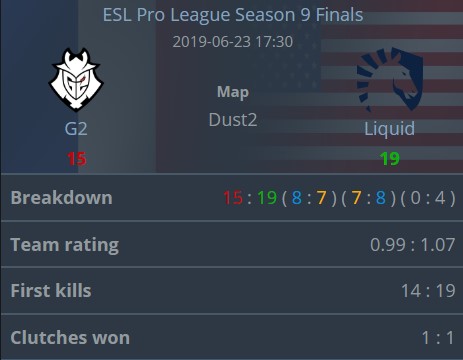 But the effort was not able to bear fruit as Liquid went on to secure the map in the overtime. Once again Elige had led the NA giants from the front.

The two teams moved on to Overpass and Liquid under no circumstances were letting G2 walk away with this map. Starting as T-sided, Liquid took a massive lead against the French line-up in the first half and without giving anything away went on to string four rounds as CT to walk away with another victory.

Though Liquid was eager to settle the matter on Nuke itself, this was not the end of the road for G2, who still had a lot more to offer. After successfully restricting Liquid from running away on the CT-side, half the game had already been won. Liquid did score a few rounds here and there but eventually bowed down to G2.

With the match proceeding to Liquids second pick, it was going to be an intense brawl as G2 finally seemed to be getting the hang of the situation. As expected both the teams gave hell to each other with the match going on to double overtime. And though Shox gave the performance of his life, the win was not meant to be his. 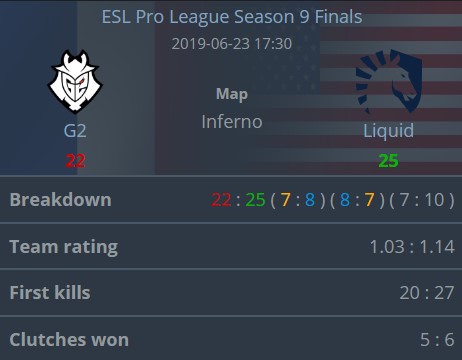 Liquid shifted gears in the last moment to secure Inferno and walked to the centre of the stage to lift the trophy for the first time ever. It was a magical moment and an emotional one for the team who have passed every challenge one after the other, silencing the haters with their work rather than their word.

With the ESL One Cologne 2019 right around the corner, this victory at Montpellier will be of immense value for Team Liquid as they set eyes on their next victory.