Just yesterday, we reported that Jimmy “Demon” Ho had recently put up a video in which he explains the reasons for his departure from Team Admiral in the middle of the season. Jimmy’s video went viral yesterday, which caused most of the Dota 2 community to sympathize with him and certainly, Team Admiral was shown in a bad light.

Team Admiral has released a statement in an attempt to clear its name, as well as to clear up some misconceptions and allegations made online in the last few days. Here’s a short summary, and key points in the Filipino organization's statement.

Team Admiral had this to say when talking about the alleged “Horrible living conditions”:

“We, the management, find it hard to believe since the bootcamp was a 3-story house with 3 bedrooms and 1 maid’s quarters. Jimmy had the luxury of having one room all to himself, while staff/management got one room and the other four players shared one room. Everyone else, except for Jimmy, had to share a room with someone else. Aside from room privileges, Jimmy had access to the two household help (a cook and a helper who cleaned the house) that were provided for the comfort of all the players.”

They also stated that they went above and beyond to help Demon settle into the team, providing him with money for “partying” even though they weren’t obligated to do so, adding that Demon wasn’t very polite (not saying please) when asking for the “Load”. 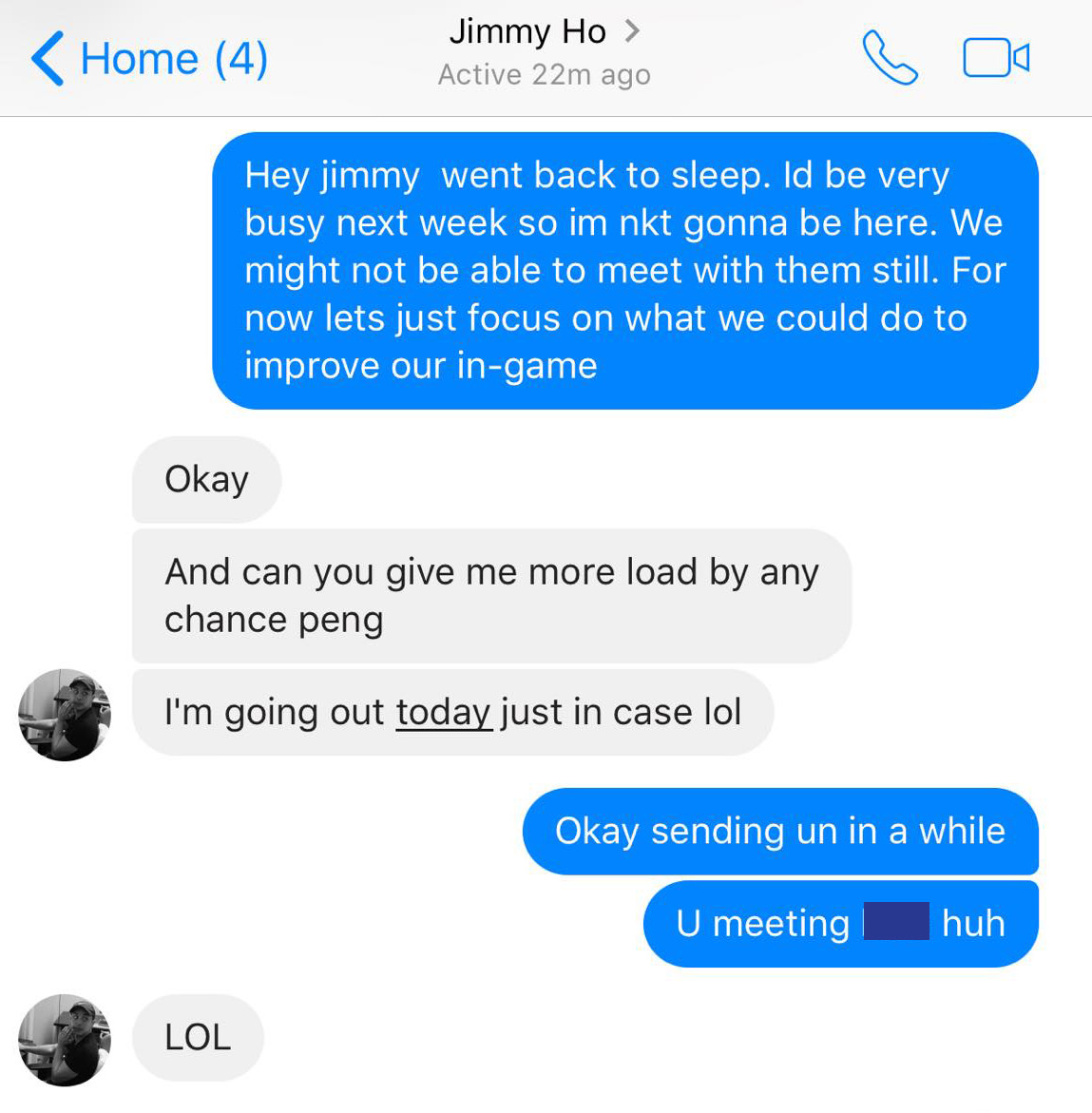 Team Admiral claims that Demon was frugal and let his teammates/management pay for basic living expenses like food and laundry. They added that his “teammates were too shy to tell Jimmy that his behavior was unacceptable” and that even though the management made it clear to the players that “they should be considerate and pay for their own expenses”, Demon ignored it.

“He even asked for a “happy ending massage” with the expenses to be shouldered by the management if they won all of their practice matches; so you can imagine our shock at the statement that he couldn’t bear to stay at the bootcamp. The only depression he had shared was about his ex-girlfriend, but he had so many girls stay over in his room the management thought he got over it. His luxuries, inconsideration and rule-breaking was tolerated so we thought everything was just fine at his end.”

Adding that while the bootcamp might not be up to the standards expected by Demon, it was still an attractive destination for “Top Filipino” players thanks to their lenient rules and top-notch facilities.

Response to the ‘Glass of Water’ incident

Team Admiral admitted that there was an issue with ‘Martin’ and Demon with regards to ‘the glass of water’, but clarified that Martin was not the manager of the team. He was the Owner/Sponsor of Team Admiral and that asking someone to go fetch water is very disrespectful in Filipino culture.

However, they’ve stated that Martin was banned from the Bootcamp after that incident and that the manager had apologized to Jimmy but made it clear that he shouldn’t expect favors from anyone (including teammates) except himself and the household help. 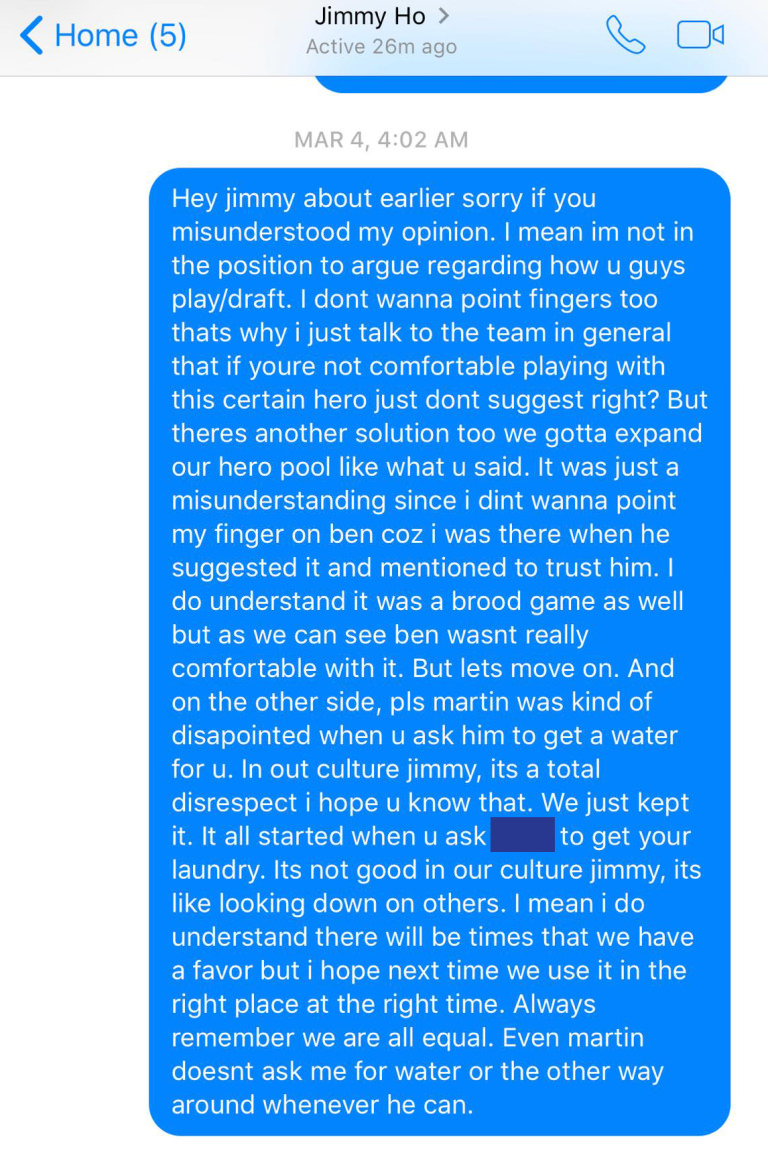 The organization also added that this incident wasn’t the only time that Demon acted unprofessionally towards his housemates and management. He is alleged to have asked an unnamed person (who was not a paid staff of Team Admiral but more of a support to the management) to get his laundry for him. 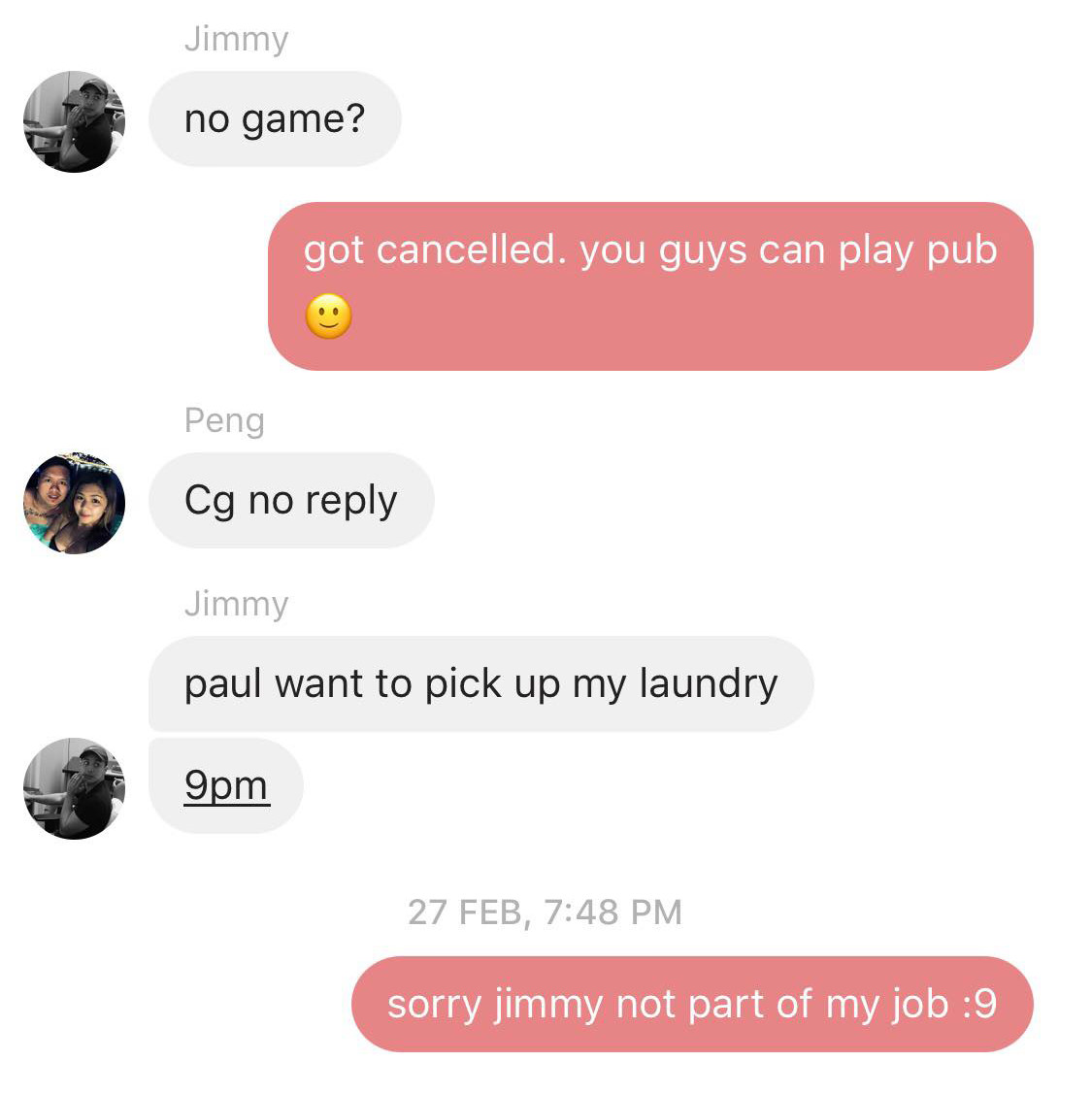 Demon is also alleged to have made false accusations against one of Team Admiral’s housemaids, implicating that his watch (which was found in his jeans two weeks later) was stolen by her which almost lead to her being fired.

Team Admiral has also said that Jimmy “Demon” Ho didn’t sign the contract once he got to the Philippines even though they both agreed with the terms of the contract when they discussed it informally.

Hence, the management claims to have considered the contractual situations, his high salary, and his unmovable vacation in the middle of the TI8 SEA qualifiers before making a decision to let him go, when he went to his March vacation in an attempt to salvage what was left of our wasted investment.

“Even after knowing all this, Jimmy still released the statements which caught on and spread throughout the entire community. No management is perfect and we have admitted responsibility on our shortcomings but that doesn’t mean that we mishandled and threatened our player. Our organization was born out of the ambition of producing one of the best SEA teams this year. We have worked hard to provide all the needs and reasonable requests of the players in our team, and at the end of the day all we wanted was a little respect.”

You can read the full statement from Team Admiral HERE.

Jimmy “Demon” Ho is yet to make a public statement (if any) in response to these allegations by Team Admiral.