“The first step towards reducing the footprint of CS:GO Majors on the global event schedule.”

While the dates for the Champions Stage remain unchanged, the Challengers Stage which was supposed to go on for a total of six days will now be cut down to just four, while the Legends Stage trim down to five days from six.

The event organizers have also announced the ticket details for the event with the general sale starting today 21:30 onwards.

The tickets can be bought under two categories, regular and premium. Both of these available as a single day entrance ticket or a four-day bundle.

The general category tickets for a single day entrance are priced at €25 for Thursday and Friday and at €35 for Saturday and Sunday. The four-day bundle is also available at a price of €99 along with which the attendee will be getting a special CS:GO themed batch as well.

The premium category tickets for a single day entrance ticket is priced at €50 for Thursday and Friday and at €60 for Saturday and Sunday. The four-day bundle can also be purchased at €249 with which the attendee will be getting a free goodie bag with exclusive gifts inside.

All the premium ticket holders will be seated in a separate premium area while also having access to a priority line in signing sessions. 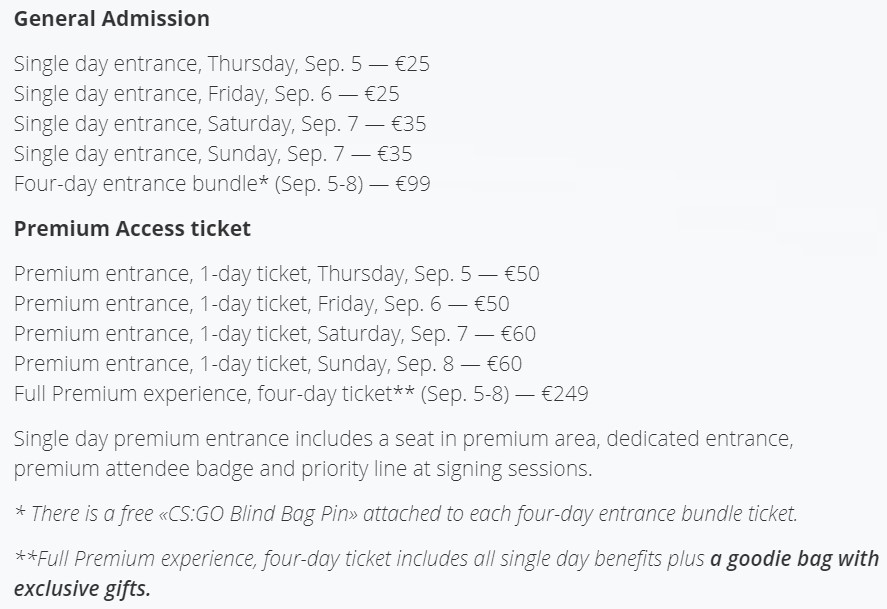 NOTE: Due to legal age limitations in Germany, only people over the age of 16 are allowed to attend the event. No exceptions will be made, they will not be allowed inside the venue even with the legal guardian present or any sort of written authorization.

People interested in attending the event can go ahead and purchase the ticket by clicking HERE.