So close, yet so far: Mineski fall to Newbee in the Group B – Upper Bracket Final

3rd, Feb, 2018
With their next tournament appearance in the Dota 2 Pro Circuit over a month away (Bucharest Major), Mineski put on one hell of a showing in the Group stages of the Starladder i-League Season 4.

They 2-0d Kinguin in their first match to move on to face Newbee in the Upper Bracket Finals of Group B. Unfortunately, they lost 2-1 to the newly crowned, ESL One Genting champs. But they put on one hell of a show proving that they are still one of the absolute best teams in the Dota 2 Pro Circuit. 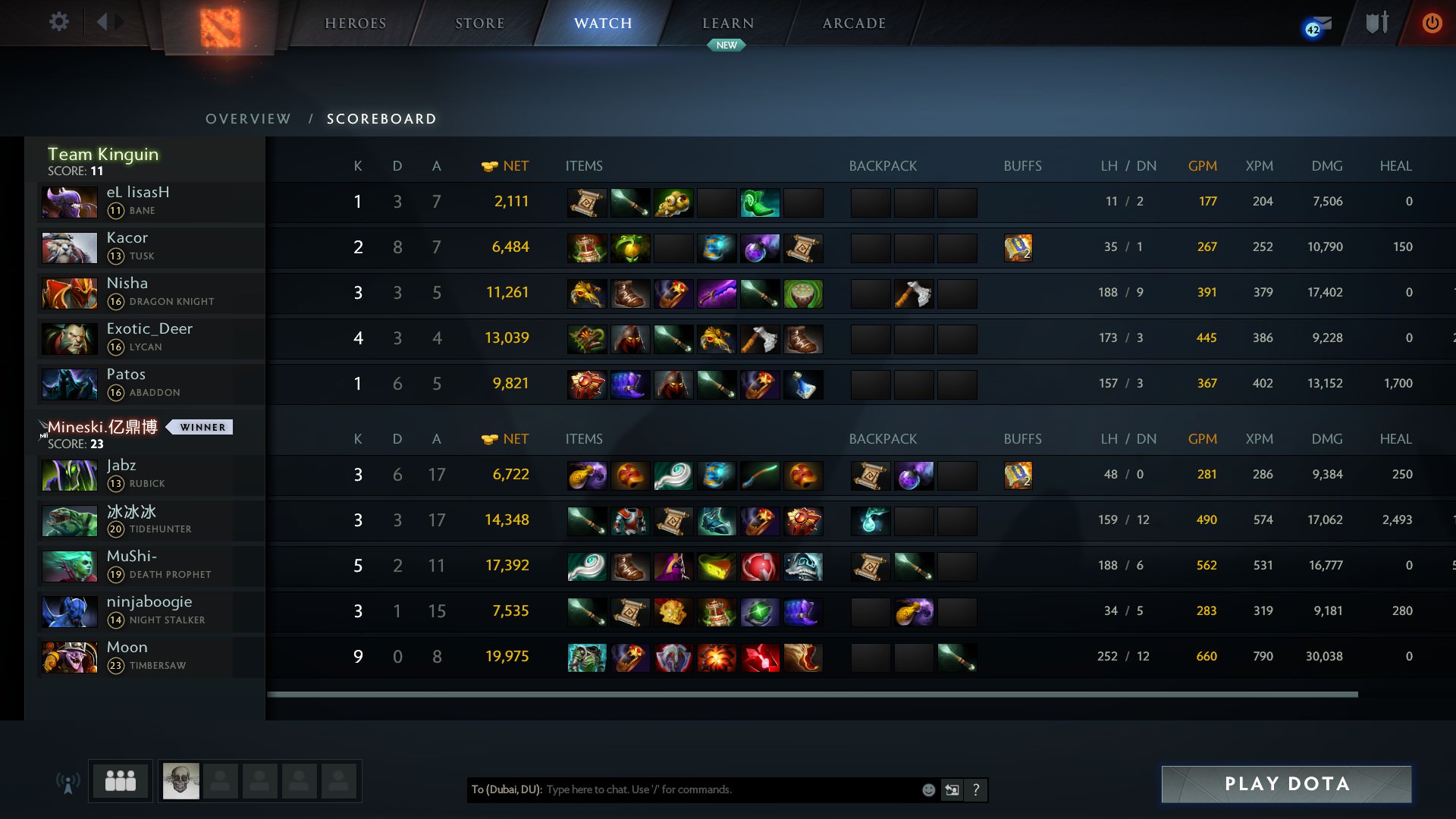 In the first series of Group B, Mineski took on Kinguin. Both teams haven’t been in the best form but Mineski came in as the favored side. In the first game, Mineski went for a heavy burst lineup built around the Death Prophet and Tidehunter Ultimates. They were very successful with it as Moon got off to a fantastic start on his Timbersaw finding kills all over the map which let Mineski secure a number of towers before the 20-minute mark.

Mineski slowed down the pace a little bit after the 20-minute mark to let their cores farm up their key items like the Bloodstone on the Timbersaw and a Guardian Greaves on the Tidehunter. It was the calm before the storm as Moon steamrolled Kinguin to a comfortable victory after his Bloodstone purchase. 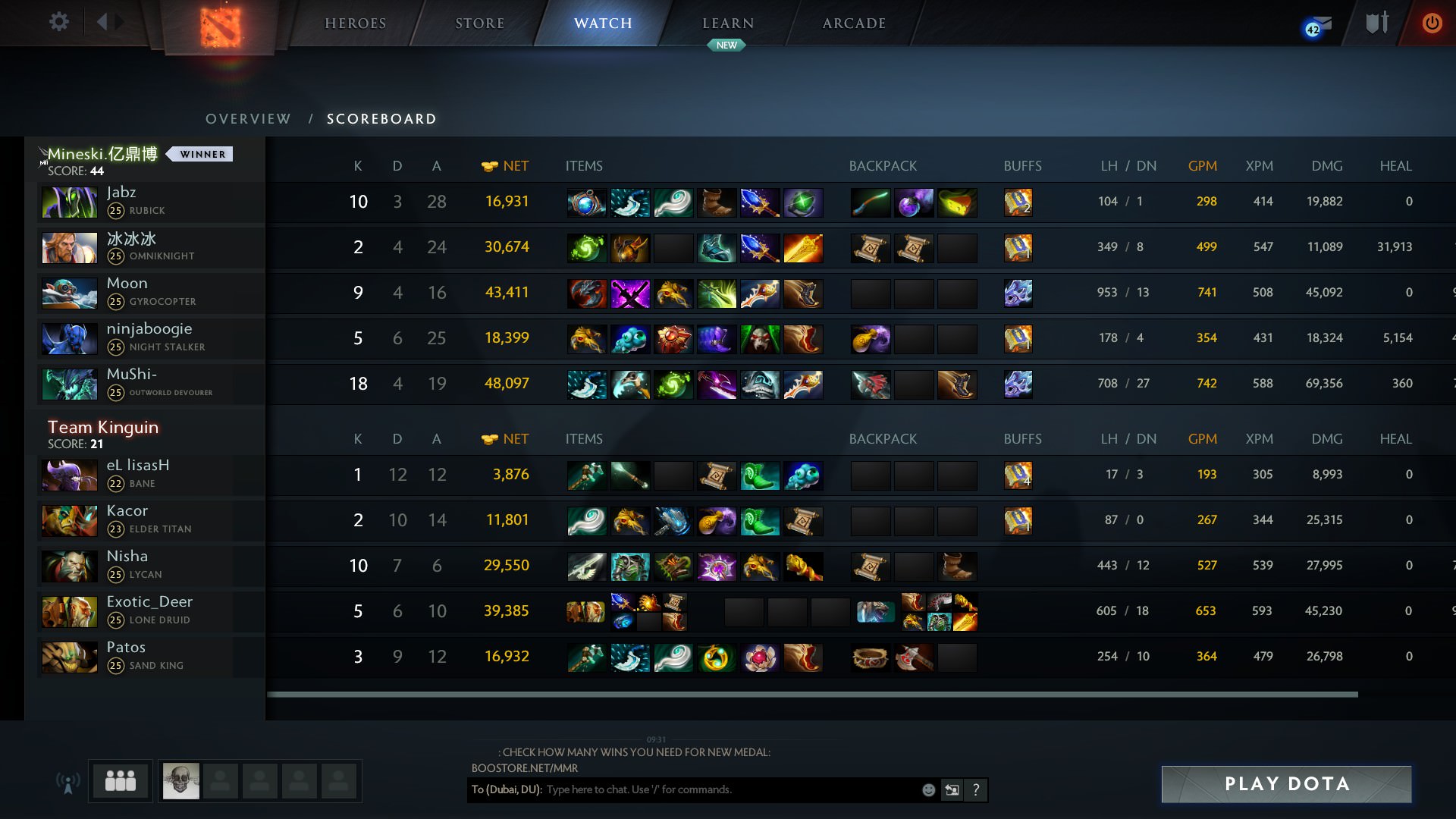 In the second Game, Mineski fell behind early as Kinguin got of to a hot start with their Lycan – Lone Druid Duo Core. They easily secured a Roshan early into the game, thanks to Mineski’s poor positioning and Mushi’s Meteor Hammer pickup (Which although not as bad as the Casters thought it was) slowed down the OD’s momentum.

Things went from bad to worse as Mineski got picked off by the unorthodox Lycan – Sand King roaming duo, which lead to more objectives and more Roshans for Kinguin. Mineski were left staring down the Barrel of Megacreeps at just the 30-minute mark. But they didn’t tap out.

In one of the best games of 2018, Mineski progressively got themselves back into the game, on the back of a Divine Rapier on Moon’s Gyrocopter and Mushi’s max level Outworld Devourer who was dealing a Truckload of Damage.

Equipped with a Shadow Blade(Later Upgraded into a Silver-Edge) and a Hex, Mushi started finding kills all across the Map by himself which played a crucial part in Kinguin being hesitant to splitpush, even though they had a Lycan, Lone Druid as their cores.

After 1 Hour, 8 Minutes Mineski finally closed out the game picking off the Lycan and Lone Druid’s Spirit Bear to get themselves into the Winner Bracket Finals. 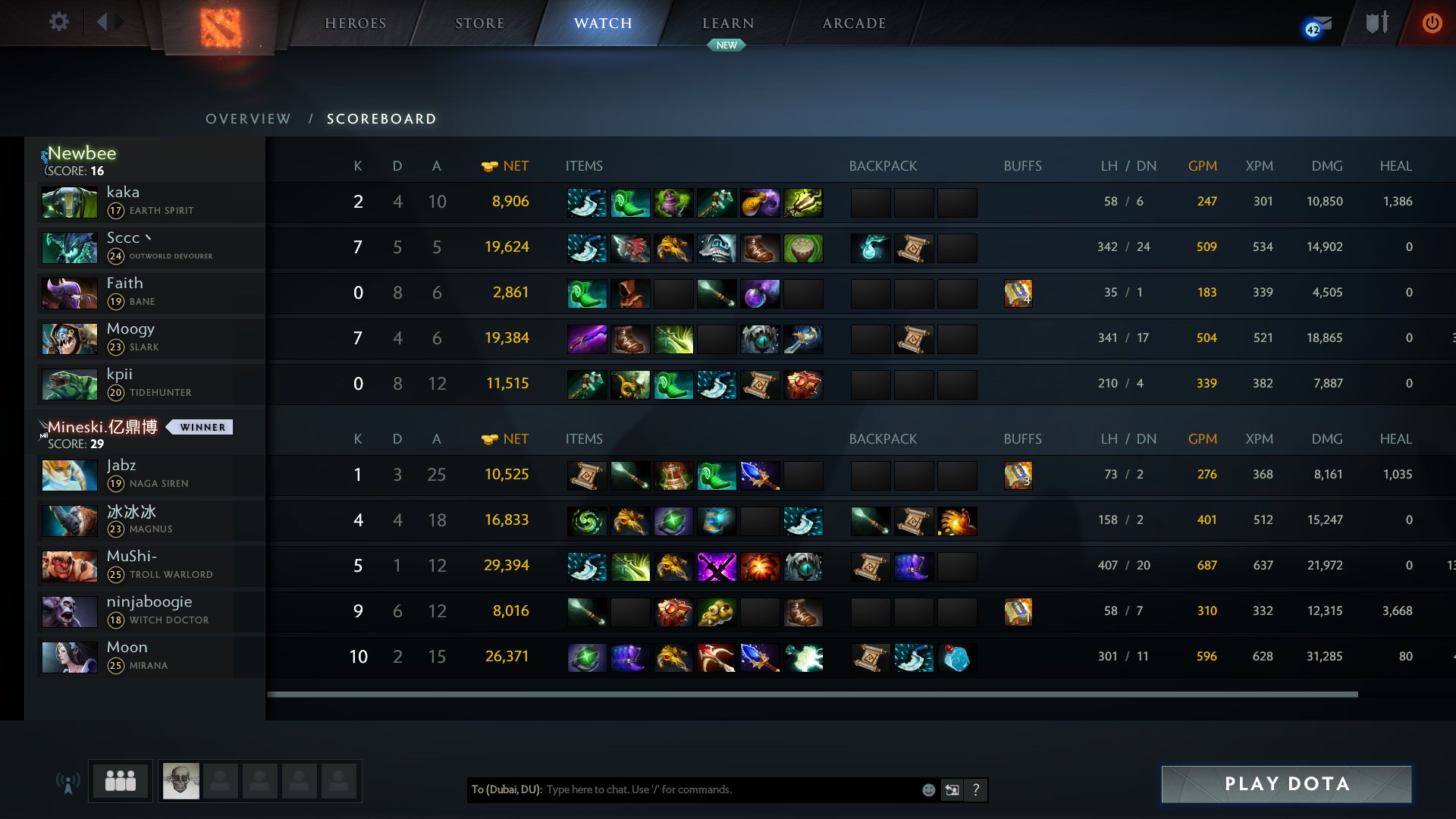 In the first game between these two teams, Mineski had a strong pick composition that featured Troll Warlord, Mirana, and Magnus; 3 out-of-meta heroes. But Mineski made it work.

Going up against a Slark-OD core combo from Newbee, Mineski played out of their minds to go Toe-to-Toe against the newly crowned ESL One: Genting Champions. They started off the game by winning handily winning the safelane with the Troll Warlord and breaking even in the Mid and Offlane with the Mirana and Magnus respectively.

But the most impressive part of how Mineski played was their midgame decision making which lead them to get multiple kills on the Moogy Slark and Sccc OD. It was better showcased when Newbee bought back on their cores and pushed high ground, after killing off Mushi’s troll. Mineski out teamfighted Newbee to hold the Barracks 4v5 thanks to some sick co-ordination of Spells, and precise decision making.

Though the game dragged on for a bit longer, Mineski were eventually able to snowball their way to a victory and gain a 1-0 advantage against Newbee.

From Minute 1, Newbee looked like they had the stronger composition thanks to a cheesy last pick Leshrac against iceiceice’s signature Timbersaw and Mushi’s Phantom Lancer.
Despite a sloppy offlane performance from kpii on the Abyssal Underlord, Newbee hit their power spikes and used their pick comp to great effect. Newbee quickly took down objective after objective with Mineski just unable to withstand the heavy firepower of the Sccc Shadow Fiend and uuu9’s Leshrac.

Newbee closed out the game with an overwhelming 25k gold lead. The MVP of this game was clearly uuu9 on the Leshrac with a whopping 17/1/12 KDA. 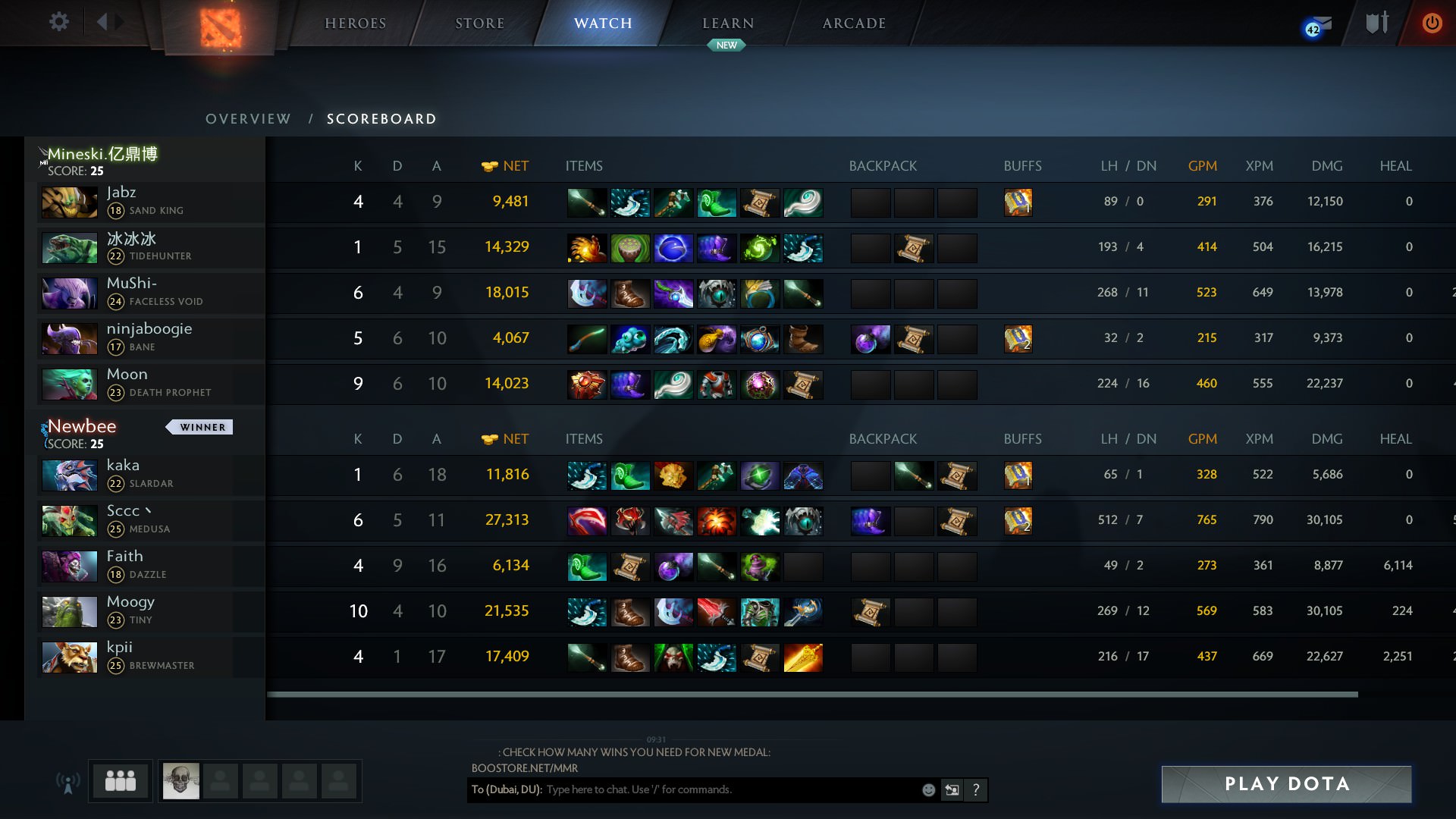 The game was mostly even early on. A hectic team fight around Roshan during the mid-game went in favor of Newbee, and they were able to open up a strong lead. Though they got a strong lead, Newbee struggled to close out the game and the match stalled out. Mineski cycled around their cooldowns really well bringing down the Medusa multiple times with some smart item decisions as well as superior teamfight skills.

But Newbee eventually found a pickoff onto Moon’s Death Prophet, which allowed them to close out the game and secure a 2-1 win in the series which sent them through to the Playoffs.

Mineski will now take on the Winner of the Kinguin vs Team Empire matchup in the final match of Group B with the winner going on to the playoffs. The match will go live at 07:00 PM SGT | 04:30 PM IST.
About UsContact UsServicesRSS
DisclaimerAdvertise With UsArchiveEditorial Team