?Sherdils and Yakshas on even footing

1st, Feb, 2018
Acrid’s Yakshas and Ritz’s Sherdils played out a draw yesterday on U Cypher and it’s clearly evident that teams are beginning to get a feel of each other as we come to the end of the first half of the round robin stages. It was the last game of the first half for both teams and both have performed quite well for now. But neither were able to take first place and occupy the 2nd and third spots behind the Marksmen who still have a game left to play.

The Tekken match was a clash of 2 unbeaten stars, Hanso/huns from the Sherdils and Jaunty from the Yakshas. Huns emerged the clear victor taking a convincing victory and establishing himself as the top dog in Tekken. In Real Cricket the Yakshas came back maintaining their unbeaten streak as the scores were tied out at 3-3.

Freaky on fire against the Yakshas

Sherdils were firing on all cylinders as the Yakshas still don’t look convincing enough in Counter-Strike. Mantr1 especially had a terrible game netting himself only 6 frags in the 26 rounds of play. The Sherdils won the pistol and the subsequent 2 rounds getting off to a good 3 round lead from the T side. In Yakshas first gun round, captain Ritz would take control and find 4 frags in the inner site to pile the misery on his opponents. Sherdils were up 5-0 when the Yakshas had their second gun round, finally managing to get on the board. With Sherdils repeating some of their executes in the next few rounds, the Yakshas were well set up and took 5 rounds themselves tying it all up. However, they did lose players everytime thanks to Freaky being explosive while trying to open up sites and the CT’s didn’t have a stable grip on the economy. When the Sherdils managed to buy up again and take a round, the CT side crumbled not being able to muster up a full buy as the first half ended 9-6 in favour of the Sherdils.

Yakshas found the openings required to get the pistol round on their T side and eventually evened up the score at 9-9. But once the Sherdils gun round came into play it was evident that the Yakshas were not prepared on their T side. They would only pick up one round from thereon out as Ritz and the boys closed out train at 16-10.

Both teams haven’t looked the sharpest in Counter-Strike and while the Sherdils picked up 2 wins in their first 5 games, the Yakshas only managed 1. It’s going to require some serious effort from both of them if they want to surpass the Marksmen who have looked really strong in Counter-Strike.

Experience is the most crucial factor in a Dota a squad and the duo of Acrid and Punk are living proofs of that. Despite being over 22k net worth behind, the Yakshas held onto their high ground repelling the Sherdils time and again. The Yakshas squad initially looked quite greedy with the tri-core of Medusa, QoP and Tinker all needing vast amounts of farm. And sure enough, the Sherdils punished them heavily for it, not allowing the Qop or the Tinker to execute in team fights. However, Acrid took it upon himself to carry his team and picked up items at a good pace on the Medusa. Despite that though, the Sherdils got the better trades and towers and tried to go high ground. It wasn’t the easiest of tasks with the constant march of machines spams and with Weaver as their only tower hitter, they struggled. Mamacita’s OD knew that a pickoff would help his side get a lane of barracks and tried to go for the jump-ins but was thwarted each time.

At this time, Weaver made the rookie mistake of not keeping buyback while Acrid and gang kept their cool despite a massive net worth deficit. They found a team fight in the top lane going their way and despite expending a buyback on the Tinker they killed the Weaver. With nothing to hold their high ground, the Sherdils had no answer and despite leading the networth and the kill count, they were left red-faced as the Yakshas snatched an unlikely victory from right under their noses. The signature ‘Quit kar’chant came out from PunK and the Yakshas tied up the match.

With this, both teams are done with their games for the first half of the round robin. 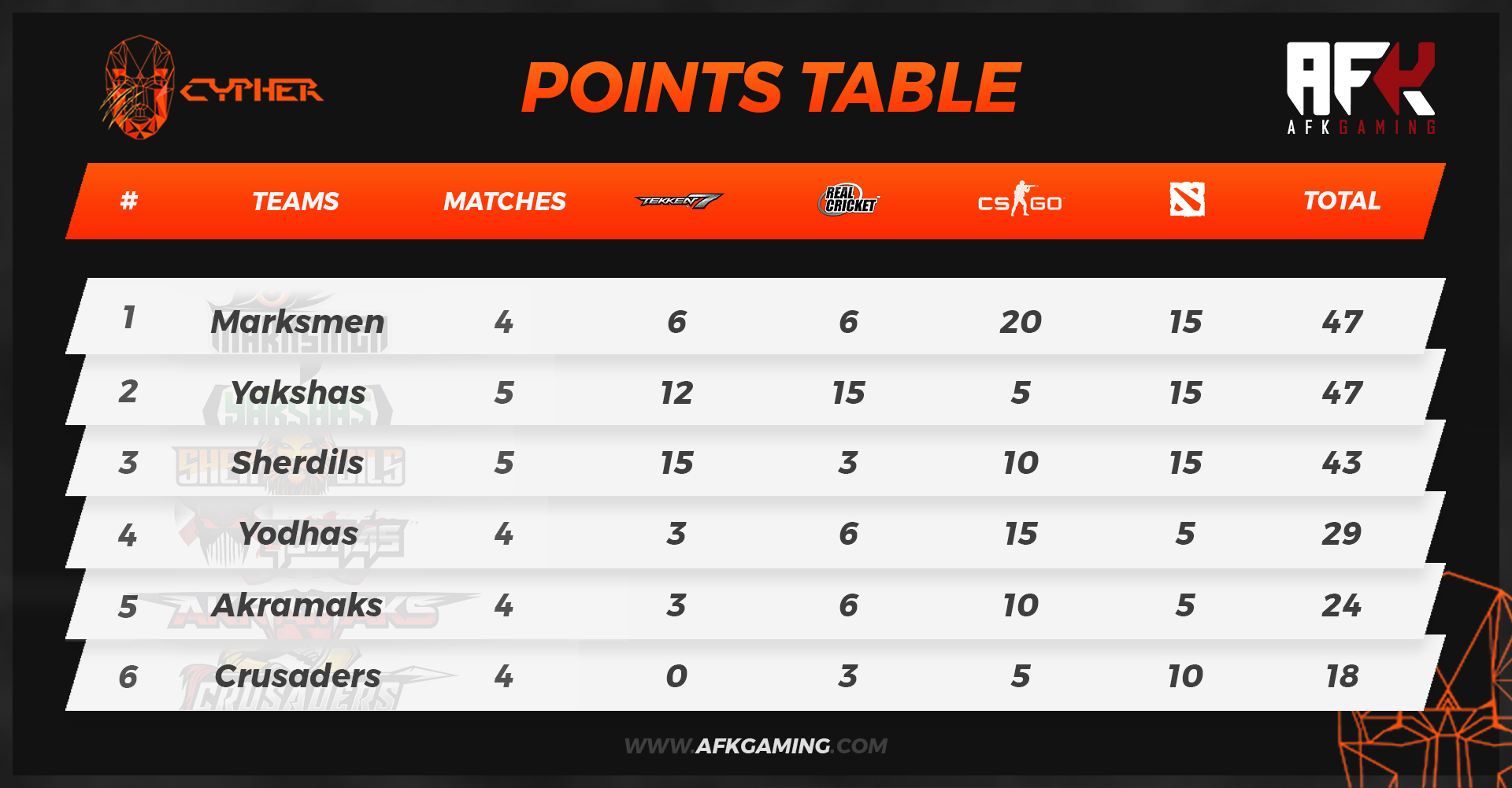