With the Indian Dota 2 circuit finally coming to a halt after one hell of an action-packed year, it’s time to finally do a top 10 players rankings once again.

From 2016 to now, the frequency of Indian Dota 2 tournaments has grown considerably, and with it, so too has the number of new talent that's made it to the top of the ranks. We’ve even had an Indian team make an International appearance in a premier tournament in front of thousands in the audience.

2018 has steadily become the landmark year for many of these players who have now permanently established themselves as the front runners in the Indian scene. Here’s our ranking of the best Indian Dota 2 players of 2018.

Author's Note: Although I will use various metrics to justify my rankings, the opinions expressed here represent my own personal views and thoughts. If you do not agree with me, feel free to express your displeasure at my Twitter, it makes me feel relevant. 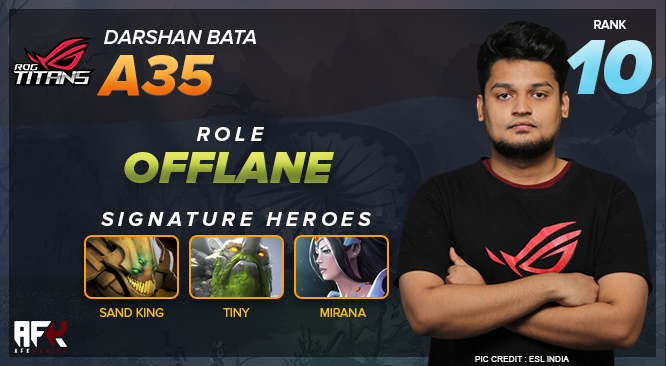 Formerly one of India’s finest offlaners, barely makes the list, after a somewhat disappointing 2018 where he only managed to land a single trophy whilst playing second fiddle to Signify, all year long. In fact, his only title this season came from the event that Signify decided to skip.

The player hasn’t really touched the highs of the previous year and has unfortunately regressed in the eyes of many. However, he has switched to a supporting role now. Will that switch enable him and his team to perform much better next season? We’ll find out soon enough. 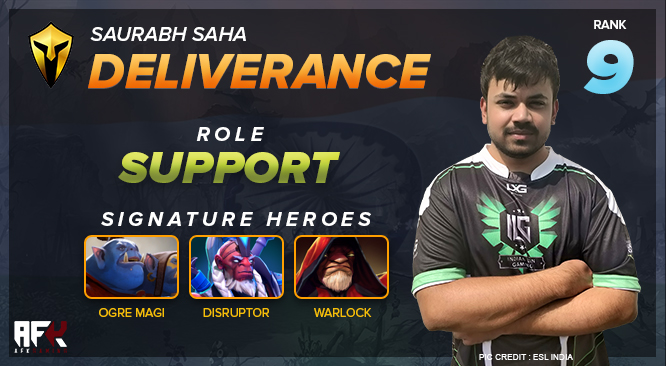 It’s been a rollercoaster of a year for DeLiVeR4nc3- who kicked off this year with a team of newcomers, built them up and lead them to a couple of local LAN tournaments as LXG Esports. Unfortunately, right when LXG started to do some real damage in the Indian circuit, he and the team parted ways thus making room for Pasoll.

Now he is part of Team WipeouT, who are beginning to pick up their pace in the ESL India Premiership. We wouldn’t be surprised if he leads this team to become one of the top dogs in the Indian scene. 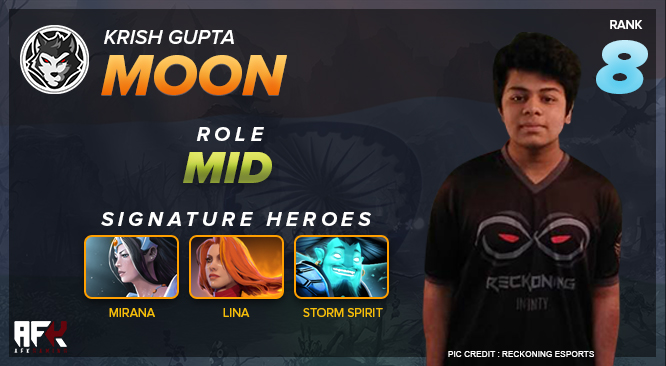 Ask Indian pro players who they think the next big player from India will be and quite a few of them will come back and say Moon. The star mid laner of Reckoning Esports has a ridiculously versatile hero pool, and is more than willing to move out of the mid lane if needed, which has worked out well for his teams throughout the year.

He has a unique style of play which requires a lot of farm, but when he gets it (which he somehow always does, even if shut down in lane) he will come back and turn a game. His performances in the middle lane were a big reason for Reckoning Esports’ success this year, and in a year full of great mid players, he stands out as one with great potential. 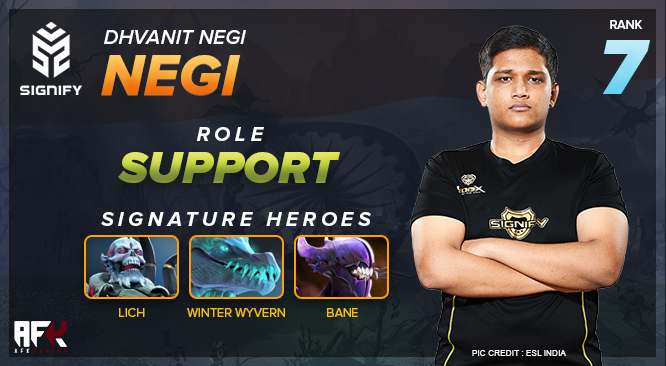 If you only considered the number of trophies won over the course of the year, Negi deserves to be amongst the top 5 players in this list, with the rest of Signify. However, whilst he has been consistent and reliable throughout the year, he hasn’t really improved upon his performances in 2017 and doesn’t really bring in something special to the table.

That said, Negi’s support play, having been moved around everywhere from carry to mid to offlane, is that of a man who has seen everything that the game of Dota 2 can produce. If he can just expand upon his supporting skillset by just a whit, he could quite possibly become the best support player in the country. 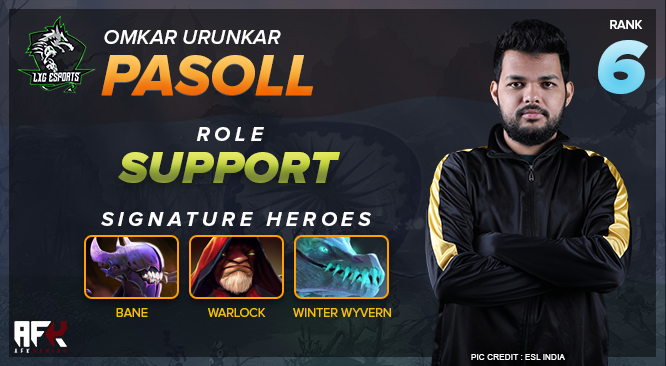 Pasoll has captained some of the best teams the country has ever produced, so it was quite unfortunate to see him on the sidelines for such a long time. But now, he's back with LXG Esports, a team with massive potential, and he has continued to find success by reinventing the team, and pushing them to new heights.

In just a month's time, Pasoll has already lead his team to one-off victories over Signify and Veteran. Given some more time to work with this team, he could see many more victories to come. After all, he did pull off a similar feat with team Aggressive 5 prior to joining Signify. 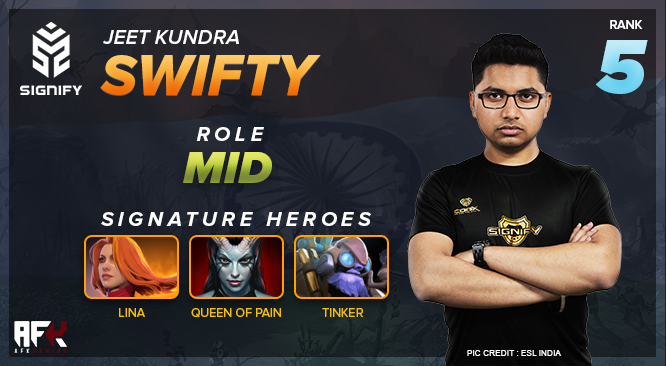 If you just take into account the sheer number of trophies won or try to evaluate a player based on raw skill, Swifty is guaranteed to be near the top of this list. Unfortunately, he hasn’t really had those standout performances this season to push him into the top 3.

Swifty’s masterful understanding of many mid heroes and calculated plays on glass cannon heroes were enough to land 6 LAN titles this year. His incredible solo outplays in the middle lane are a massive hit with fans. His knowledge and skill make him a formidable matchup for any other mid, and always an entertaining watch for the rest of us

He continues to be the numero uno mid laner of the country. 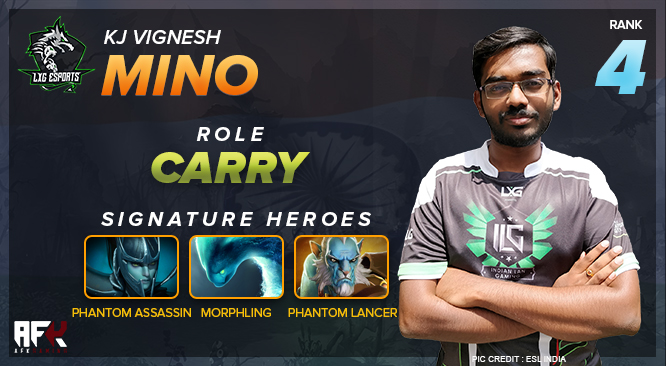 The breakout star of the year, according to our books - Mino has surprised many by coming out of absolutely nowhere to deliver performance after performance of great carry play. An uncanny claim to fame of his this year is the fact that he is the only Indian player with two accounts in the top 200 of the SEA leaderboards.

Mino’s Phantom Assassin is terrifying, and in just 8 professional games on the hero he has a 75% win rate with an average KDA of 6.41. His strategy of farming fast, ganking early and building as many stat-efficient items as possible leads to some really weird builds on heroes like Phantom Assassin but not without its fair share of success.

The only thing holding him back from true greatness now is sustained success with his team. Only time will if Mino can achieve that with LXG Esports. 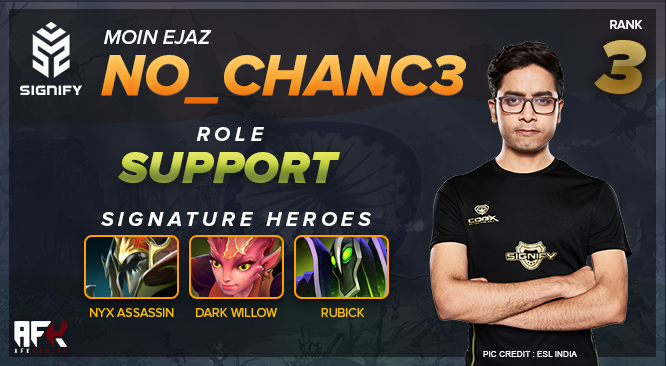 Until just a week ago, No_Chanc3 had won every single LAN tournament held on Indian soil for more than one year. That is just a testament to the type of player and the level of competence that No_Chanc3 brings to the table.

The scariest thing about him is the amount of pressure he puts on your team during a draft. His play on picks like Rubick, Kunkka and Nyx Assassin drew bans throughout the year, but he’s been able to consistently perform despite being targeted. He is also one of most consistent and knowledgeable position 4 supports in the country, and he always seems to find himself in the right place to enable his team, even against the best teams in the world.

He continues to hold his place as the best support that India has to offer. 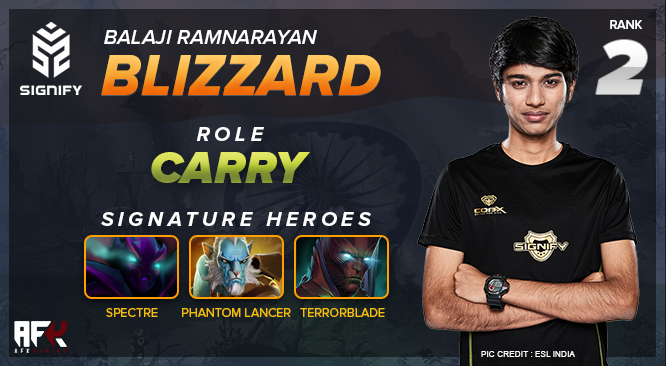 Coming in at number two is BlizzarD, who was an integral part of Signify’s 6 LAN victories this year. He has had an unbelievable year, and almost single-handedly won Signify a load of games. It helps that his mid laner, Swifty, is one of the best in the SEA region, which gives the supports more time to help the safe lane, but even so, he has proven himself as the best in the country.

His understanding of how far he can push down a lane without getting punished is an intimate part of his own skill and tenacity as a carry player. This was most prominently displayed in the PVP Esports Championship where Signify utilized this perfectly to beat down Resurgence, KSY and Hashtag? DOTA.

If he can push on and further these developments, he can become one of the best carries in the SEA scene quite soon. 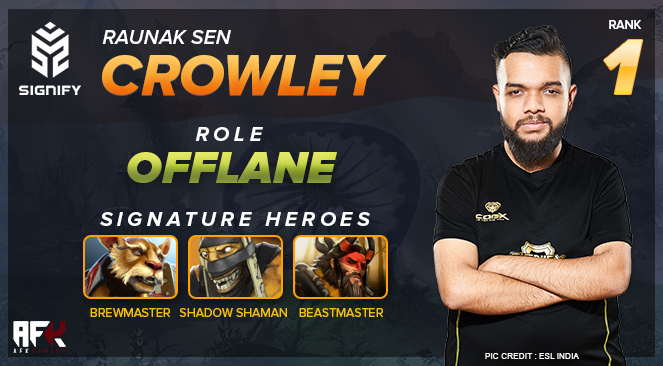 Number one on our list couldn’t be anyone other than Signify’s offlaner, Crowley. Rarely do offlaners get the spotlight in teams, and that is the case with this choice, but the level of consistency he brings to Signify is near unmatched. Crowley is always there when needed, will almost always use his spells at exactly the right time and has a weird knack of just being in the right place at the right time.

Sure the likes of BlizzarD and No_Chanc3 might come up with the big flashy plays, which Crowley might be missing from his wilder days. But what he lacks in pomp and show he makes up for with selfless space creation and confident shot calling during the game.

Crowley is certainly underappreciated by many, but without him, Signify would not be where they are now.

Don't agree with our list? Who do you think should have made it on this list? Let us know by commenting below or Tweeting at me @gfreak0