2018 witnessed a roller coaster of emotions for the Indian CS:GO community. It started with the jubilant shouts of many that welcomed OpTic Gaming to India, to the excitement of actually getting a chance to take part in India’s first public tryout. Along the way it witnessed the community's fury like never before over the forsaken saga and then it finally ended on a celebratory high with DreamHack coming to India where everyone got to experience Signify CS:GO's enthralling performance at the DH India Invitational.

The year started strong for Indian CS and it is ending at a similar peak. Let’s take a look at some of the best players that have worked hard to earn the respect and appreciation of the entire community. 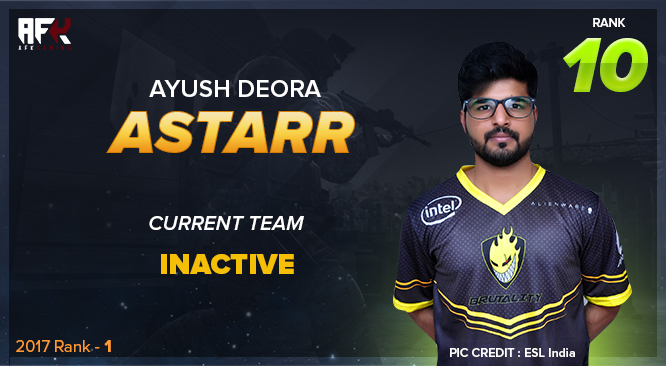 Although he has currently gone inactive and has taken a break from competitive CS:GO to concentrate on his education, he contributed his fair share towards Brutality’s effort to win an event this time around.

AstaRR is widely considered to be the most talented player amongst the Brutality line-up. His superior mechanical skill and crazy reactions have established him as an integral part of the team's firepower. 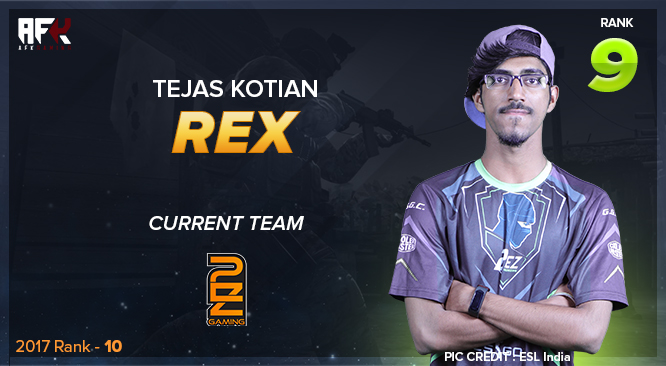 Rex has had a good year, certainly showing improvement in his rifling skills, as he constantly competed for top frags in multiple tournaments which helped him acquire a decent rating of 1.16.

He won multiple clutch rounds for 2ez Gaming at the ESL Premiership 2018 – Fall Season which played a really important role in their journey towards becoming the champions, resulting in a small bump upwards in our annual rankings. 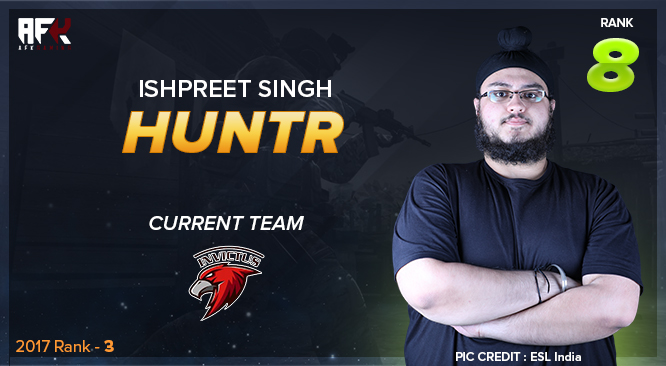 HuntR has been performing on a constant high never facing a slump or a drop throughout these 12 months.

He closed out at a constant rating of 1.2 in most of the events that fielded tough competitors such as the former OpTic India squad. HuntR was a beast when it came to events that excluded the above-mentioned teams, posting ratings of over 1.5 in both Dew Arena 2018 & TEGC 2018.

But it was his phenomenal performance at the ESL India Premiership 2018 – Summer Season where he showed his true potential taking Invictus to victory. Despite all this, there is a significant drop in his ranking, shining a light towards the growing competition within the Indian circuit. 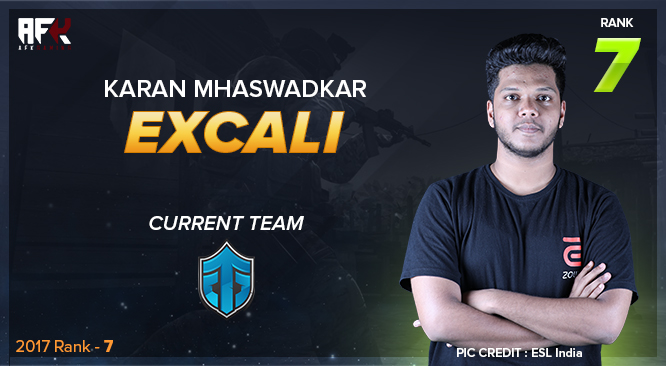 Excali who was quite dominant last year could not keep up with the tempo, fluctuating in performance throughout the year.

Performing decently at both the eXTREMESLAND Qualifier and Dew Arena 2018, he peaked during TEGC 2018 where he held a rating of 1.54 but a massive dip incurred shortly after, at the recently concluded DreamHack India Invitational 2018. He struggled against both Signify CS:GO and the two foreign invites, evident through his DPR of 0.85 resulting in a rating of 0.68.

Remaining stagnant in his rankings when compared to 2017 Excali has had a fairly good year, taking Entity to victory at both the Dew Arena 2018 and TEGC 2018, where he played a massive role in the team's success. 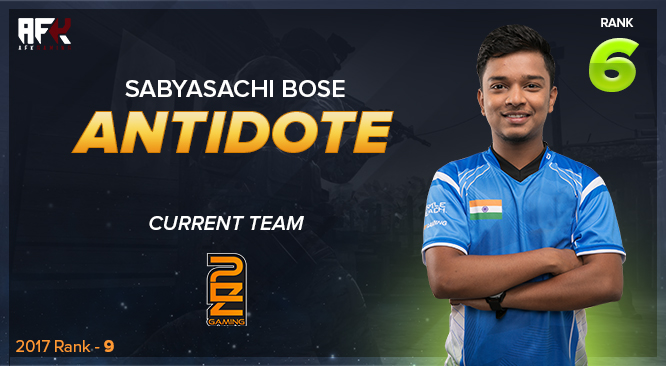 Antidote has grown a lot over the course of the last 12 months, honing his AWP skills as he played a major role in ex-OpTic India’s success.

Really quick on his trigger, he has adopted the aggressive AWPing style well enough, managing to hold his own against the likes of players like CrazyGuy, who is considered to be one of the best AWPers in the SEA region, at the DreamHack Mumbai 2018 BYOC Qualifiers.

He performed consistently until he was a part of OpTic India which has lead to a great jump in his ranking but this cannot ignore the fact that his recent performances have not been at par with his standards. Perhaps this will change in the coming year as he acclamatizes to his new team. 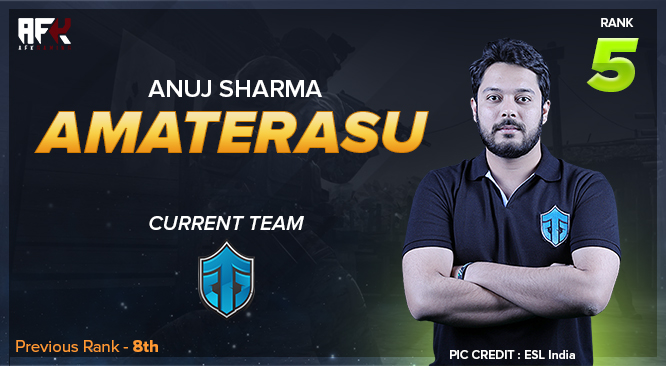 Amaterasu - considered as one of the best CS:GO players in India, brings with him a great deal of experience and a bucket load of skill. He went berserk at the TEGC – 2018 seeing Entity all the way through as the champions and his individual performance was something to be feared as he reached a KPR of 1.16 following which his ratings shot up to a seemingly impossible 1.97.

He has stood up to the task when required and has led by example, showing consistent growth and working year-upon-year tirelessly to be the best, enabling him to move up the rank ladder. 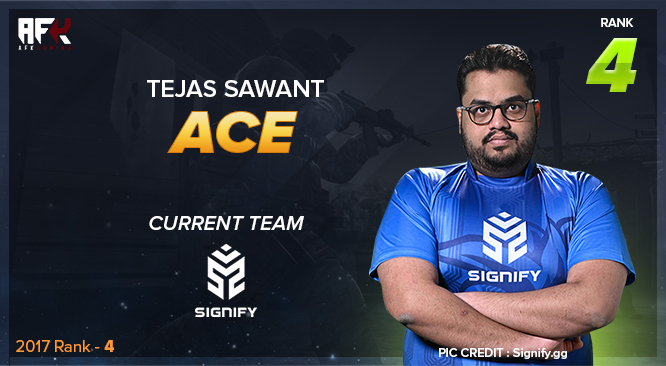 Ace is an old school veteran who has had the privilege of attending a CS:GO Major and brings with him loads of experience, by playing in both the Indian and the international circuit.

This year witnessed his return back to India after spending about 10 months with an Indonesian team called Executioners. Though the Indian scene was in disarray at the moment, Ace seems to have settled down well as part of Signify CS:GO.

While he played most of his matches out of India with a decent average rating of around 1.1, he put up a solid show at the DreamHack India Invitational 2018 sending out a clear message that he is still a force to reckon with. 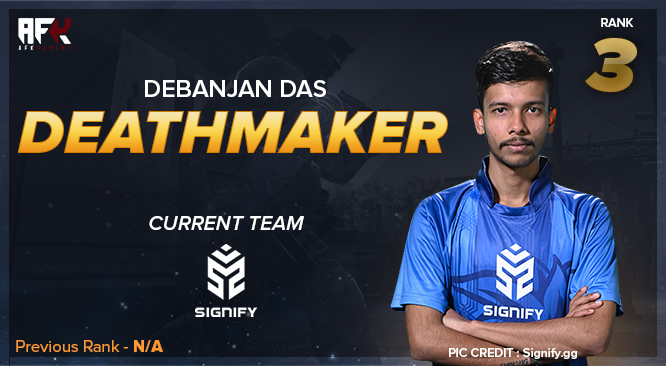 The most promising rising star from India, he has shown immense growth in a span of just one year. DeathMaker witnessed a small stint with Entity Gaming mostly as a temporary stand-in playing with them during the eXTREMESLAND 2018 – Indian Qualifiers and Dew Arena 2018.

In both these outings, he held his own with an average rating of 1.11 against some of the best Indian teams. But his best performance came with Signify CS:GO where he also showcased a solid temperament when facing clutch situations.

Promising, driven and talented are some of the qualities that make this young lad a great asset to any line-up. 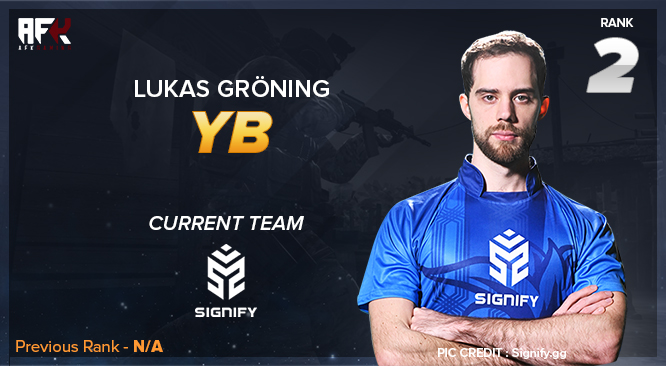 Yb is quite possibly the best IGL to have ever operated in the Indian circuit. It was his exceptional leadership qualities that were a prominent factor in ex-OpTic India’s success and he has continued to utilize his knowledge of the game with Signify CS:GO as well.

While not really big in the stats department with an average rating of 0.90 he works his magic through the invisible web of selfless teamwork. The way he reads enemy movements while constantly trying innovative plays is a class apart.

Glad that we will get to see a lot more of him in the coming year as well. 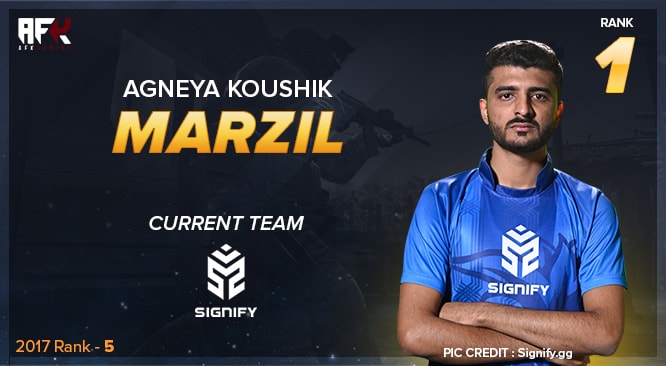 Few could argue that Marzil isn't the best rifler in the country at the moment. He has grown by leaps and bounds since being accepted into the ranks of ex-OpTic India where he has thrived and persevered, practising harder than ever before while honing his skills against international opponents as well.

Marzil is gifted with great reactions, solid temperament and a rock steady aim which makes him a massive threat if he gains momentum and confidence early on in the game. We witnessed an incredible performance by him at the DreamHack India Invitational CS:GO where he top fragged for his team in almost every single match.

While it doesn't affect these rankings, being a rather popular streamer only adds on to his cred as he continues to grow better with each passing day.

Most of the players making it to the top 10 are from the ex-OpTic India or the Entity line-up, which sums up how the Indian circuit has been dominated largely by two teams with quite an intense rivalry being built between them.

Although the departure of OpTic India shook the entire community, their faith has been restored by the arrival of Signify CS:GO, who seem to be the new competitors to Entity Gaming.

I expect the coming year to hold some intense match-ups with teams like Brutality, 2ez and Invictus always there to cause an upset to the two absolute powerhouses.

2019 will surely see Indian CS:GO expand its reach to more international events and maybe we could even hope to win one!

Do you agree to disagree with our list? Who do you think should have made it on the list according to you? Let us know in the comment section below or feel free to drop me a tweet @Catslayer_999

Ratings used in the article are courtesy of HLTV