?QO and March team up to compete in the SEA Open Qualifiers

One of the biggest roster stories to come out of the recent SEA open qualifiers so far has been the return of Kim "QO" Seon-yeop and Park "March" Tae-won with ‘Team MarchOutOfArmy’.

Qo was an active player on the Dota 2 Circuit throughout 2017. Although he was able to post a couple of decent results with Immortals this year, a lot of disappointing finishes seemed to push him towards taking an indefinite break.

Reports of March’s desire to return to competitive Dota also surfaced a few weeks after QO's announcement. True enough, he joined the Echo International organization as a coach, soon after. But after what seems to be a split of the Echo organization, it looks like he has decided to team up with fellow Koreans, QO and Reisen to form this new team.

Their roster registered on Faceit is as follows: 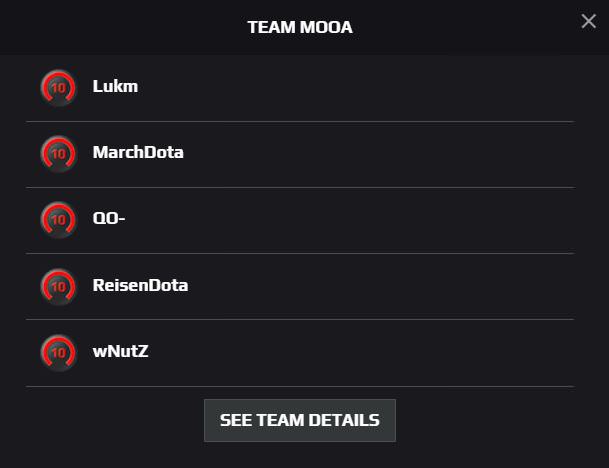 At a glance, their roster looks quite solid, thanks to the level of talent and experience QO and March will be working with. Reisen is most known for his time as a member of MVP Phoenix, where he played alongside both QO and Match as their 4 position support.

As for Nutz, his last major accomplishment was a 4th place finish at the Manila Masters, as a member of Team Faceless. Prior to that, he got as far as 7th place with MVP Phoenix in The International 5. He too has quite a history with QO and March.

Luk ? is one of the most sought-after pubstars in the SEA scene. The Singaporean carry player currently ranks 34 in the SEA leaderboards. He is the only player in this roster with no previous attachments to the MVP Phoenix organization.

March will be switching from the offlane role to the support role on his new squad. He is known as one of the most aggressive supports in SEA, thanks to his flashy playstyle and mechanical skill. His signature Spirit Breaker will likely see plenty of action in the upcoming season—provided that his team's opponents do not ban them out of respect first.

This marks QO's first appearance as an active player since his departure from Immortal in January of this year. QO is one of the most aggressive carries in the history of the game, and so fans are undoubtedly excited to see him back in the booth. Perhaps we'll get to see him play Phantom Assassin again in the near future.

Got kicked from netcafe, disqualified mdl openqualfier 1st round because of 20 minutes


They were playing in the MDL Changsha: SEA Open Qualifiers earlier today, but unfortunately lost out to the Indian team, ROG Titans after they were rocked with disconnect issues. QO, Reisen, and March disconnected from the game for well over 20 minutes before ROG Titans resumed the game, adhering to the rules.

Playing 2v5, ROG Titans were easily able to close out the game and knock the Koreans out of the tournament.


This team is still relatively new to the scene, but if the members find synergy quickly there should be good things in store for this roster.