Markus ‘pronax’ Wallsten took to Twitter yesterday to announce his retirement from professional CounterStrike. The 27-year-old hailing from Sweden had been playing professionally since the CS 1.6 era and transitioned well into the modern, Global Offensive.

Best In The Business

Pronax started his journey 11 years back in 2008 with Meet Your Makers and after an impressive run with the organization went on to representing various top 1.6 teams like H2k Gaming, ESC Gaming & a2g.

He shifted to Global Offensive in late 2012 playing for Team X and after shifting around a couple of teams finally found his big break on 12th November 2013, when he was offered to be the IGL for Fnatic.

He served the organization for two years during which they underwent their most successful run yet and became the most dominant CS:GO team of that time. He led the team to victory in two back-to-back majors, the first ever team to do so. It was Pronax’s moment to shine as the world got to see his talent as an incredible in-game leader.

Renowned worldwide as a great strategist and someone who can read the opposition really well, Pronax is one of the best IGL’s that CounterStrike has ever seen.

He even created his own CS:GO team called GODSENT but failed to recreate what he had achieved with Fnatic, after about 14 months of operating with the roster, the team disbanded. He switched between a couple more teams but failed to achieve distinct results.

His final attempt at achieving some level of success came in the form of Team Ancient, which was an all Swedish team. The team was last seen in action at the European Open Qualifiers for Berlin Major 2019 where they went down to Vitus.Pro.

Pronax has certainly left his mark on the community and his juggernaut of a run with Fnatic will long be remembered. Many in the community have shown their gratitude towards his contribution to the game and wished him the best for the road ahead. 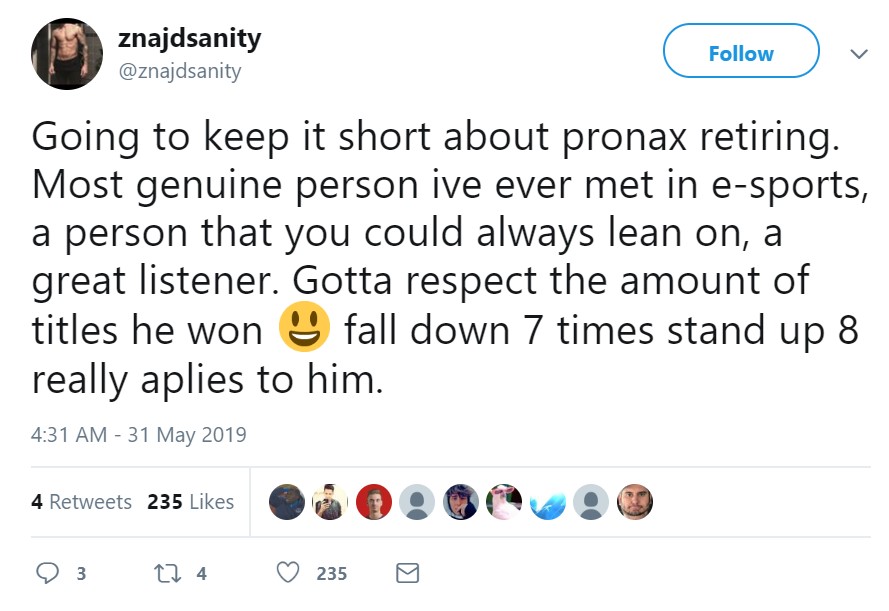 “There is a reason why there are more players and fewer captains. Not everyone is cut out to be a leader."