Picking in Pubs: A look at hero trends across the different ranks and roles

It’s safe to say that 7.19 has been one of the better patches in Dota history, allowing for a wide range of playstyles, strats, heroes and picks. When it comes to pubs, many of the popular picks and builds are influenced by the pro scene and with only a couple of tournaments left before the next big patch hits us, let us take a look at what the pubs have been up to in the last month.


The midlane has once again come down to the true 1v1 matchup that many older Dota fans love and remember. Invoker seems to be the most popular mid pick along with Sniper up until the Archon bracket. Invoker itself is a popular pick across all brackets enjoying a 20-29% pickrate across Dota. The interesting thing to note however is that the hero's winrate increases directly in correspondence to the MMR of the bracket in which it is picked. The Sniper pick, however, becomes increasingly unpopular along the MMR progression line. 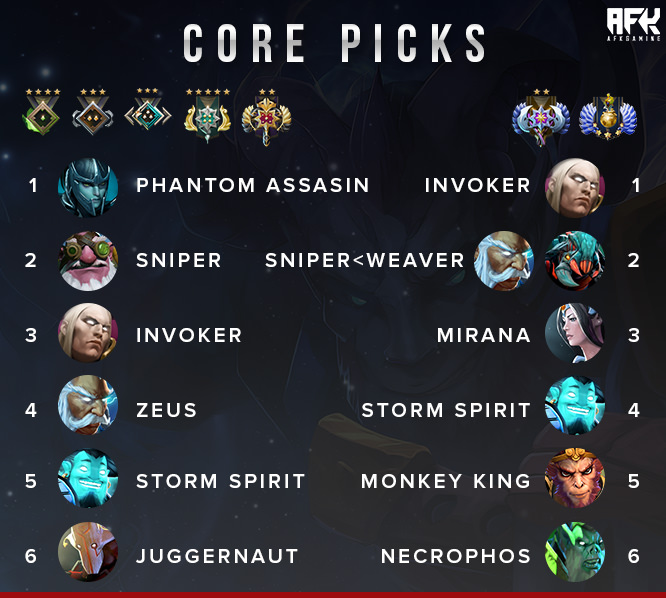 The other two popular mid heroes are the Zeus and the Storm Spirit and both increase in popularity along the brackets due to the need for correct itemization and conservative play in theearly - mid game, characteristics which lower ranked players may not necessarily have. Zeus actually holds a 50+% winrate across all brackets.

Among the heroes which is seen both in the safelane and the mid lane the most popular one is Mirana. The hero offers a lot across all stages of the game but her early laning and last hitting isn’t necessarily the best meaning that he pick rate is significantly lower in the lower MMR brackets. However, past the Ancient or even in the Legend bracket, the hero enjoys at least a 50% win rate.

Phantom Assassin has been a very popular pick in the lower MMR’s due to the heroes manageable laning and solo killing + snowballing potentials. However, past the Archon bracket, the heroes pick rate falls drastically. On the other hand, the Weaver pick which is one of the hotter picks in the current meta has seen a 4-5 % increase in pick rate across all ranks from the last patch.

Heroes with a higher skill cap like the Tiny, Monkey King, Phantom Lancer all see 15% + pick rates in the Divine and Immortal brackets and while these heroes are doing well in the pro scene as well, they don’t enjoy a similar popularity with lower ranked players.


The newest hero on the block seems to be doing really well. While the higher ranked players who play the game more consistently have managed to figure out the hero fast enough, below the Legend rank, the hero see’s a significantly lower pick rate. However, the heroes win rate is still at 50% across all brackets, and considering that he has just been released, it does give the impression that Grimstroke needs a nerf. 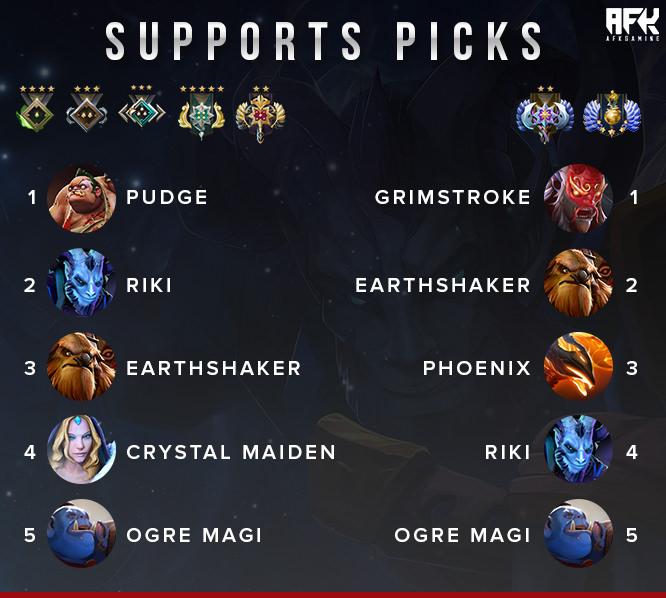 Earthshaker too is a popular pick across all brackets and is one of the few heroes who has a 50% + win rate through and through. The general usefulness of the hero across all stages of the game combined with a big team fight winning ultimate makes him a solid support pick. And speaking of absurdly high win rates, we have another 4 position hero who seems to be the talk of the town nowadays - Rikimaru. The pesky purple invis hero has been deemed as one of the more overpowered heroes of the patch and despite a nerf in the last sub-patch, enjoys quite the high win rate along all brackets. The popularity of the Support heroes is spread better than the cores across most of the brackets. Crystal Maide, Ogre Magi, Shadow Shaman and Spirit Breaker all enjoy 50+ win rates across all brackets, and their pick rates are also somewhat close with a slight variation caused by the skill gap.

However, no support list is complete without talking about Pudge, the hero with the highest pick rate across the entire Dota landscape. The ability to make flashy plays makes the hero a go-to pick for many players, who don’t like to sit and babysit their cores. Surprisingly though, despite all the bad Pudge players I encounter in my games, the hero actually has a more than 50% win rate across all brackets.

All in all the differences in hero picks between the ranks is there but it isn’t as significant as one might imagine. Most heroes seem to be viable in certain situations and overall this patch does seem to be quite balanced. However, balance aside, some freshness is required as the meta is starting to become quite stale. Hopefully, a new patch awaits us in November.