Pain Gaming show the world that they are no pushovers

6th, Mar, 2018
Day 2 of The Bucharest Major was just as good, if not better than Day 1 of the group stages. We once again saw plenty of upsets, incredible games and massive plays throughout the day.

Following EG knocking down Team Liquid to the 1-1 group,  VGJ.Thunder outclassed and outplayed Team Secret to knock them down as well. Following that, Newbee beat OG comprehensively thanks to Sccc’s farmed Gyrocopter. Virtus.Pro made a huge comeback to take the win against LFY; the champions of the previous major look very shaky at The Bucharest Major. Na’Vi as expected prevailed in the CIS showdown against Vega Squadron.

“With our Train, you learn how to bring the Pain”

Pain started the game well, with Kingrd making great rotations throughout the map and finding multiple pickoffs in all 3 lanes. The first big teamfight came as early as the 12-minute mark where we once again saw the power of Pain Gaming’s teamfight.

However, they were punished in the retreat with Vici Gaming using the Song of the Siren – Static Storm combo to perfection. They lost 4 heroes in the retaliation.

But Kingrd was having the game of his life on the Sand King finding kills all over the map with his Sand King. He was everywhere. Vici Gaming was unable to match the pace set by Pain Gaming thanks to Kingrd’s phenomenal Sand King play.

Vici Gaming grew desperate and tried to use Papparazi on the Wraith King as bait to force Pain Gaming to fight into the Naga-Disruptor combo, but a clutch silence from W33 on the Death Prophet prevented the counter-initiation.

Vici Gaming’s attempt to salvage the fight was met with a three-man Black Hole from tavo to shut them down and secure the win for Pain Gaming.


Day 3 of the Group Stages will bring in the first set of eliminations, 4 teams are in the danger of getting knocked out from the event; Vici Gaming, Mineski, Vega Squadron and LFY. Only two will survive, who will they be?

Meanwhile Evil Geniuses, Newbee, VGJ.Thunder, and TNC Pro Team are one match away from securing qualification, all 4 teams have been stellar at the group stages so far. There is very little separating them, but who can handle the pressure and hold it together to secure qualification for the Main Event?

One of the most anticipated matches of Day 3 will also be the first game of the day. It’s an all-CIS showdown once again as VP take on Na’Vi. This will be a grudge match for sure, as Lil was recently released from Virtus.Pro for Rodjer from Na’Vi. Both teams will be desperate for the win, who will be Right? who will be Left? 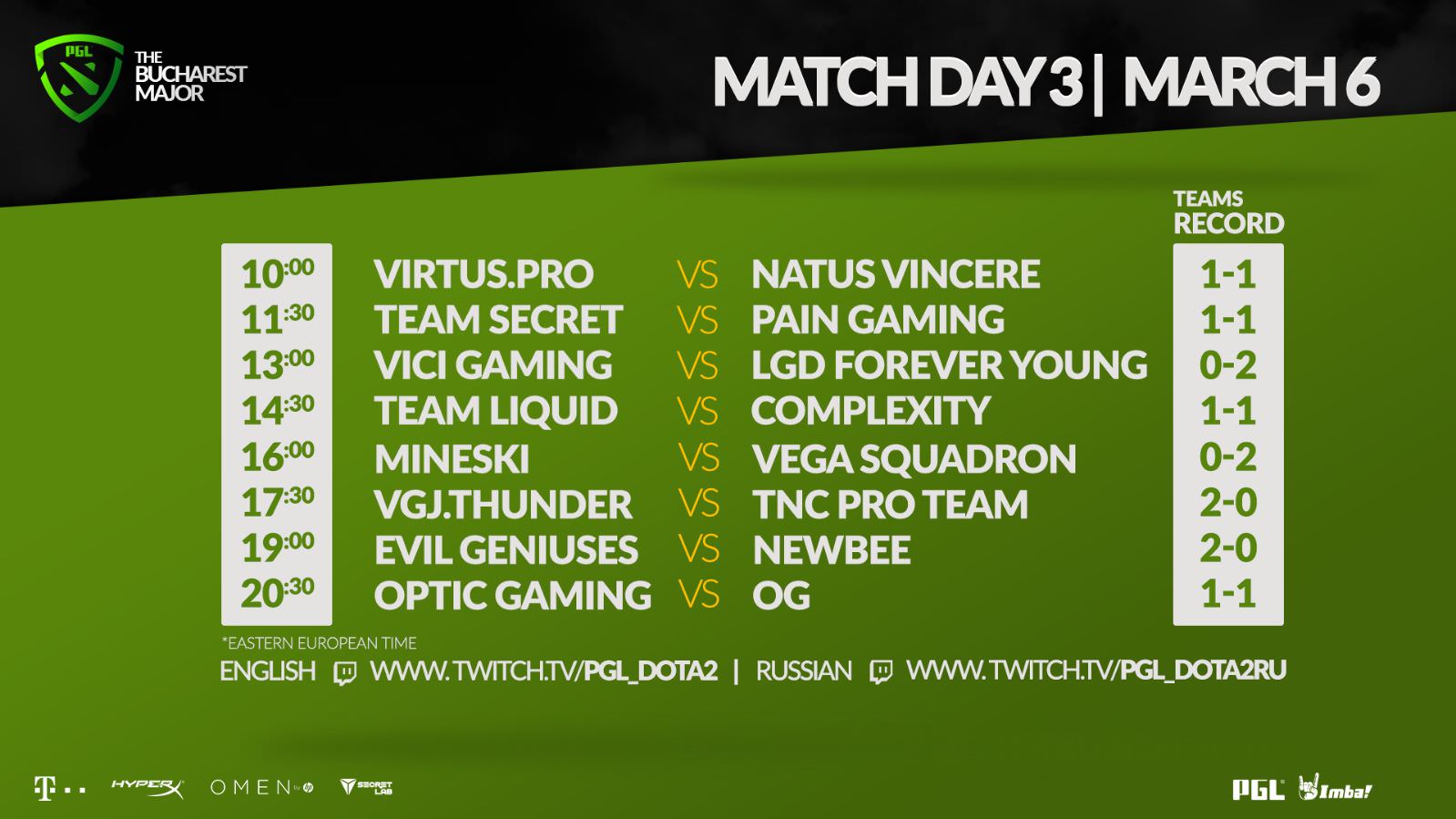