OpTic Gaming’s foray into the Indian esports scene earlier in the year was met with positive reactions by most and it has taken a mere 4 months for the side to establish themselves as India’s best CS:GO team. A massive selection process saw OpTic holding a first-ever open tryout in India selecting a team of 5 from over 1400+ applicants. While some were critical about the selection process, the team's performance over the months more than speaks for its legitimacy and the final outcome.

The 5 Indian players were all somewhat known names in the Indian scene but barring Marzil, none of them had found much major success with their previous teams. Entity Gaming were the big boys of Indian Counter-Strike at the time and while many of their players took part in the tryouts, only Marzil parted ways with the org to join OpTic India. The team was further bolstered by the arrival of Lukas ‘yb’ Gröning from Germany who took over as IGL/Coach and had an immediate impact. Since the formation of the squad, the team has gone unbeaten showing just how much of an impact a good IGL can have when combined with a professional regimen and training environment.

Since their inception, OpTic India has played only Indian tournaments, dominating each and every one. Their journey started off in the Dew Arena Qualifiers but the team had to drop out due to some specific rules regarding only Indian players.  However, an unbeaten run to the semis was still a great start. From here the team went onto play the Taiwan Excellence Gaming Cup Qualifier, where they moved onto the playoffs with a win over Brutality in the semifinals.

The team also participated in the ILG Cup Season 2 Bangalore Minor: Blitz 2, a local LAN featuring some local teams. While there was no real presence of other top teams, the boys in blue took an easy victory and were able to test their mettle in a LAN environment. The team then played the Neon Gaming Studio: Monsoon Madness Open Season 3, an online tournament as they strolled through the brackets for an easy win. Another online tournament, followed, the Playtonia Rigid Roulette Season 2 as the team found easy pickings against some tier 2 Indian teams, and took the win.

In the very beginning it seemed a quite hard task to become the best in India. Teamplay was off, communication was bad and many mistakes were being made. But the players and the team caught up pretty fast. So obviously the goal was to become the best team in India. But I really did not expect that we won’t even drop a single game to this point.
But what's really important for us at this point is our performance in Asia, we want to be able to compete with the top Asian teams.
I think there is a lot of raw skill but it bigger problem is how to 'connect' the skill in a team. So the biggest problem in my opinion is lack of good leadership and IGLs. And of course other teams don’t have any antidote, forsaken, marzil, formless and haivaan 8) - Lukas ‘yb’ Gröning

However, the team’s real achievements have been in the ESL India Premiership 2018 Fall Season and the ZOWIE eXTREMESLAND 2018 India Qualifiers, where they played against the very best teams that India has to offer and came out unscathed. The team bested Entity Gaming thrice in the EL qualifiers, once in the DIQ online phase and twice at LAN, firmly establishing themselves as India’s best team. The wins enabled them to qualify for the ZOWIE eXTREMESLAND 2018 main event and the team will now play against some of Asia's best CS:GO teams in Shanghai this October. Another notable achievement is the fact that the team managed to go unbeaten in the Masters League of the ESL India Premiership: Fall Season. Not only have they qualified for the LAN in Hyderabad, but the team also delivered a strong message to anyone who hopes to beat them in the near future. 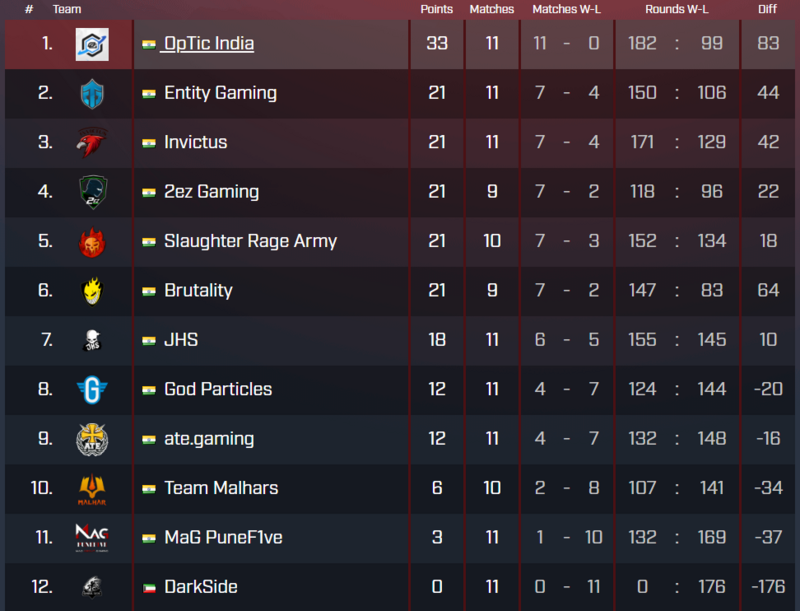 In retrospect, the team’s performances and subsequent domination speak more about the flaws in the Indian scene more than the strength of OpTic India. The team was formed just under 4 months ago and it’s unlikely that they have even reached their peak form, but the way they have bullied Indian teams, shows just how unprepared Indian Counter-Strike was for a team of dedicated and passionate individuals, in a disciplined and professional training environment, led by a strong and cerebral IGL who understands the game on a whole different level.

There are a lot of differences and changes I notice here as opposed to ETG (Entity Gaming). For starters I'm playing with 3 other players who are fresh to the scene. I also think as a player I feel much more confident and able to play my aggressive style with no restraint which wasn't the case in ETG where we had to play a more defensive non-exploitative style. Lastly, I am picking up and learning much faster here than I was in ETG. - Agneya 'Marzil' Koushik

Each of OpTic India's players have managed to establish themselves as real superstars and while Marzil was already known to be a solid player, both Antidote and forsaken have shown real potential and have on more than one occassion, been integral parts in OpTic India's victories. The team nows looks to earn success in the Asian scene. It took them 4 months to be crowned the kings of India. How many will it take before the team can take the battle to the rest of Asia?