And OpTic India came out on top after a dominating performance against their heavily outclassed opponents, SRA. With this victory, OpTic India has made history today by becoming the first CS team ever, to have gone undefeated through the entire Fall Season of ESL India Premiership while also being crowned the champions.

This is how OpTic India struck an ace taking two consecutive games in the BO3 series.

The first match was played on Nuke which was surprisingly not banned by SRA. OpTic India destroyed SRA on this map, which is where OpTic India is the most formidable. Right from the start, the OpTic onslaught was too great for SRA to handle as they won the match with a score of ‘16-3’.

The following match took place on Dust 2 which was also a very unpredicted map pick coming from SRA, as everyone was thinking their map pick to be Cache which is where they are the strongest. The proceedings were a repeat of the first match as OpTic India played a relaxed game of CS beating SRA without running into any trouble or pressure situation and took the second match with a score of ‘16-6’.

OpTic India won the series ‘2-0’ against the heavily inexperienced SRA, to be crowned as the champions of ESL India Premiership2018 – Fall Season Finale.

On top of this OpTic India also managed to win another LAN event called AMD GAMEON 2018 where they faced off against a team named Fuzion Gaming in the finals.

So OpTic India has managed to win two LAN events on the same day and is now ready to fly down to Shanghai, where they will be representing India in the ZOWIE eXTREMESLAND 2018 – Main Event. 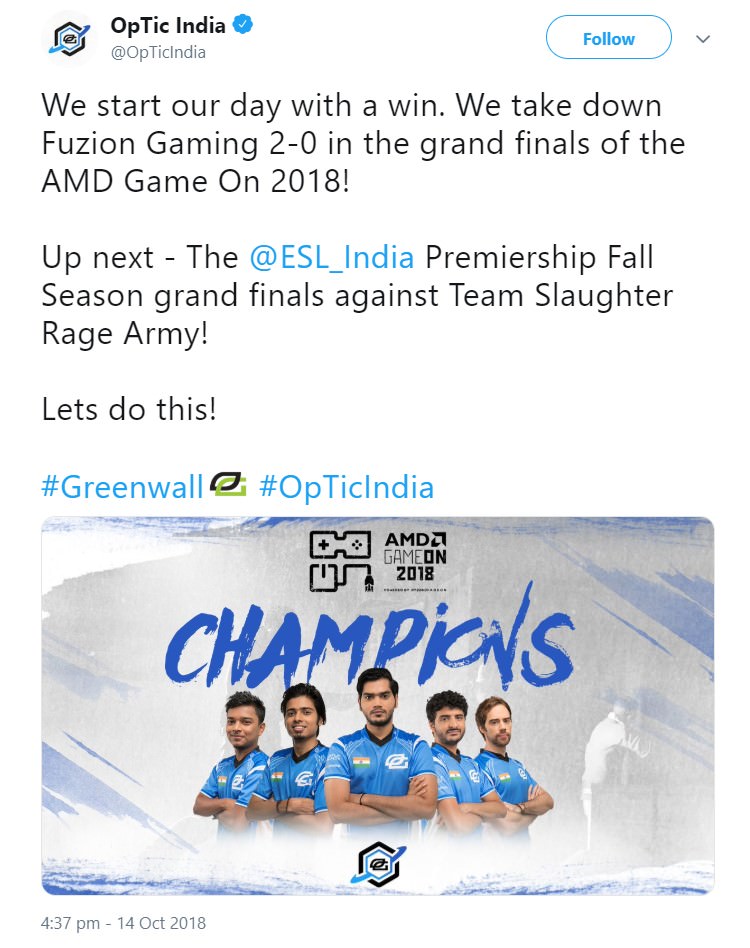 Stay tuned to witness what else OpTic India have in store for us in their upcoming international appearances.