?No winners between the Marksmen and the Yodhas

31st, Jan, 2018
Venom’s Marksmen and Wuzz’s Yodhas played out a draw last night each picking up 8 points for themselves. The ex-teammates have been veterans of the Indian CS: GO scene and have played together under the Brutality tag as well. While Wuzz may have announced his retirement, his stint with U Cypher will go to show how seriously he takes his own words.

The series kicked off with the mobile and console titles being played out and the teams snagged one win apiece and were dead even as we went into CS: GO and Dota 2. 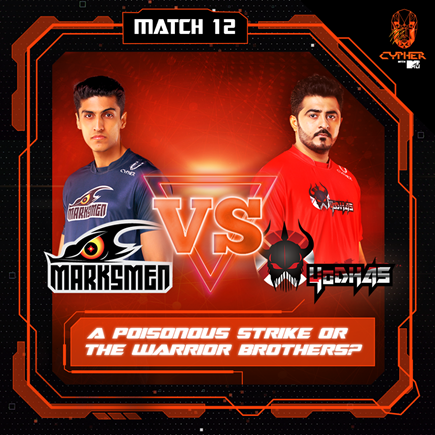 The Marksmen trotted to their 4th Counter-Strike win in as many games and Yodhas have only themselves to blame, as they allowed one inferno to be the designated map for the day. It wasn’t a very smart decision coming out from Wuzz, especially considering the fact that the Marksmen have already bested the Yakshas and the Akramaks on the same map. With the map pick going their way, the Marksmen looked comfortable and clinical, being able to land their shots with much more ease and playing with so much confidence.

And it was their captain, Venom, who led the charge picking up a monster 28 frags with an ADR of 108. Meanwhile his counterpart, Wuzz barely managed to sneak into the double digits with a measly 10 kills to his name. Its high time that teams start playing smartly and banning inferno against the Marksmen seems like an obvious choice. The Marksmen took the game 16-7; a resounding win once again for them.

The Dota 2 match was neck in neck right up till the end and had some real highlight-worthy moments. Both teams were ready to play it until the late game and the Marksmen definitely had an advantage with a 6 slotted Medusa on their side. The Yodhas meanwhile, itemized really well going for multiple Heaven’s Halberds which were useful against the Drow and the Dusa right up till the end.

The Marksmen had everything going for them including the 2 farmed cores, however, it was a troublesome game for their Brewmaster who wasn’t doing enough in the team fights. Towards the tail end of the game, Aegis, Cheese and Refresher shard became supremely important and the Yodhas managed to get their hands on a crucial Roshan, before going for the hail mary play. With an Aghs Drow and a Medusa on the Marksmen, it would be impossible to push and win the game and the Yodhas realized that and correctly went for the jugular. They had the damage to go through the enemy throne with a Divine Rapier on the Weaver and even though the Medusa herself had another one, she couldn’t prevent the throne from falling. 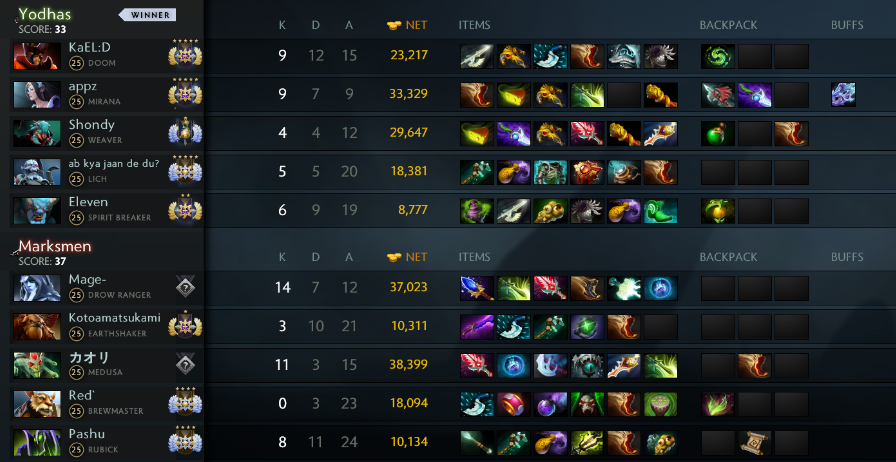 One of the closest and most exciting Dota games of the season for sure and the Yodhas clinch the victory and force a tie. Marksmen still maintain their lead at the top of the table as each team has one match to play for one half of the league to be complete.
About UsContact UsServicesRSS
DisclaimerAdvertise With UsArchiveEditorial Team