13th, Sep, 2016
Swedish team Ninjas in Pyjamas bagged their second major LAN of the year as they took down G2 Esports last night in Kiev. Their victory at Starladder iLeague Starseries Season 2 last night came as quite a surprise for fans and analysts alike with this being only their 3rd premier level LAN in almost 3 years. While silverware has been hard to come by, their performance at Starladder and that too with a standin highlights the fact that some of that old NiP magic still does exist.

16 teams made it to Kiev for the LAN finals with Navi and VP expected to take the top 2 positions. But the rest
of the teams came more than prepared as the group stages turned out to be an absolute bloodbath. In group A NiP took 1st seed as cajunb’s Dignitas beat out newly formed GODSENT to take the second seed. G2 took group B as Flipside outplayed star side Faze clan to take the other slot on the main stage. Group C was a complete shocker as Heroic took the top slot leaving Astralis and Tyloo to battle it out for the second slot with the Danes coming out victors. Favorites Navi were fielding their new roster for the first time on LAN and got off to a horrible start dropping both their games to finish last in group C. CIS counterparts VP went through a similar story in group D as NA organization Cloud9 and French side EnvyUs took the last 2 spots.

On the main stage 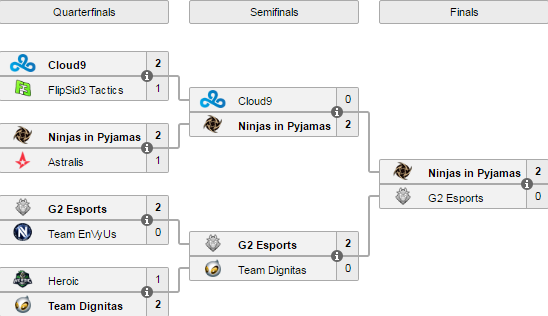 Source:Liquepedia
On the main stage, NiP had the arguably toughest opening match as they went up against Astralis, while G2 took down fellow Frenchmen nV. In the semis, NiP as well as G2 2-niled their opponents to set up a date with each other in the finals. The finals looked to be an interesting affair with both teams having underperformed for a while now despite having some star names in their lineups. In the grand finals, NiP started off explosively in the first half of cache, picking up a whopping 12 rounds as they finished. The second half was just a matter of grinding it out till 16 rounds as they ended at 16-7 to take map 1. Overpass started off on an even footing till the NiP magic kicked in, pushing them 3 rounds ahead at 9-6 when the half ended. The French side did try to pick up the slack on their CT side but despite coming close to evening it out, NiP pulled ahead eventually to reach match point. But Scream and company still managed to make it interesting by claiming 3 of their own to force overtime.  From here the game went to 2 overtimes as NiP finally took down G2 7-3 to take the map as well as the trophy in an emphatic 2-0 victory. 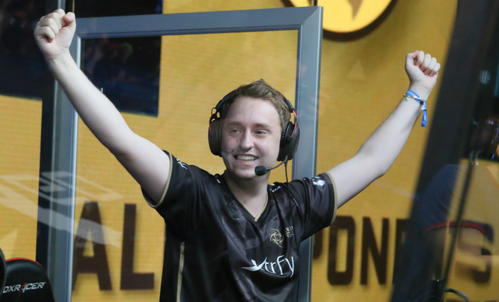 NiP’s second major LAN victory in 2016, with their first coming at Dreamhack Malmo. NiP were playing with a standin in the form of ex teammate Maikele who was replacing the injured Pyth but his performance at Kiev does spark some sort of a debate whether he should be rejoining his previous team or not. As usual the veterans were on point with f0rest especially going godmode in the finals. Some real hope for fans of the Swedish organization who have been pretty much off the radar with Fnatic and GODSENT taking up most of the column inches in the last few weeks.  With the next major set to be played in Jan 2017, quite a few questions will have to be answered in the next 3.5 months by the rest of the big teams including Navi,EnvyUs, G2, Faze clan, Fnatic, GODSENT and Astralis.
About UsContact UsServicesRSS
DisclaimerAdvertise With UsArchiveEditorial Team