2nd, May, 2018
The first ever Russian Major, Epicenter 2018, has reached the end of the fourth day of group stage. With only one day remaining in the group stages, things are starting to take shape for the main event. The fate of four teams hang in the balance as only eight teams will advance onto the main stage.

Team Liquid and PSG.LGD have made it to the upper brackets while compLexity Gaming and Team Empire haven't been able to get their feet off the ground. Mineski and FlyToMoon have also qualified for the lower brackets leaving Group A done and dusted.

Meanwhile in Group B: paiN Gaming, and hometown favorites Na'Vi are both on the chopping block, necks extended and the guillotine ready to drop. Lying in wait, with a hope and a prayer, that they will win the deciding matchup between the two. Newbee is already out of the equation but has one series left remaining at the event.

There is also a possibility for a 4/3 way tie for the upper-bracket slot between Team Secret, OG, Na’vi and Virtus.Pro. For now, OG and Virtus.Pro are the top two teams in that group.


The SEA team came in desperately hoping for a victory which would secure them a birth at the playoffs, they managed to accomplish precisely that with a 2-0 sweep over Team Empire. Mineski had outdrafted the CIS team in the first game and executed their draft perfectly to gain a 1-0 lead. In the second match, Mineski took full control of the map early in the game and superior farming efficiency made them gain a massive net worth lead which made it difficult for Team Empire to take fights with a lack of initiation leading to their elimination from the event.
PSG.LGD vs FlyToMoon

FlyToMoon has been the surprise story of the tournament so far. The CIS team who barely made it to the event via the madness qualifier, have secured a spot in the playoffs thanks to some spectacular opening 2 day performances. They might have relaxed a bit, as a result and the DAC 2018 runner-up took full advantage. PSG.LGD easily swept the series 2-0 to take the win and secure their spot in the Winner Bracket.


Looks like the roster shuffle didn’t pay off after all for the NA team. They’ve struggled throughout the Major and have looked like there is a lack of cohesion in their drafts and gameplan. Team Liquid, on the other hand, look like they’ve found their form back after a slightly shaky mid-season. They’ve started their march toward the third straight Epicenter title with a stellar 4-0 record in the group stage. A flawless performance by Miracle, with 0 deaths, in games 1 and 2 combined saw them take the win in under 25, 31 minutes respectively. coL was eliminated from this event as a result.

With OG sitting at 3-0 so far in the group stages, they have already assured a spot in the next round of the event, but they would be looking to keep their win streak going. However, standing in their way was Virtus.pro who would be looking to make a statement after their shock loss to Na’Vi yesterday. The number 1 team in the world systematically took apart OG in a quick and convincing 2-0 performance.

With their backs against the wall, Newbee could no longer afford any losses, which might have been what the team needs to finally kick into gear judging by their long, tough but victorious series against Na`Vi. Unfortunately for the Chinese squad, with the way the group advanced they still ended up eliminated. Na’vi, on the other hand, continues to surprise with their stellar play, a massive improvement in just the course of 2 weeks.

With their win over Newbee yesterday paiN would be hoping to cause another upset as they went up against a Secret that were on the back of 2 losses in a row. However, Team Secret looked to have got back their mojo. While paiN made a great stand in Game 1, they were unable to close it out and in Game 2 they fell fast, only taking 6 kills in the latter. With the victory, Secret have an opportunity to go into tiebreakers, provided that they beat Virtus.Pro in the final match.

Here’s how the groups look with just 1 round of matches to go. 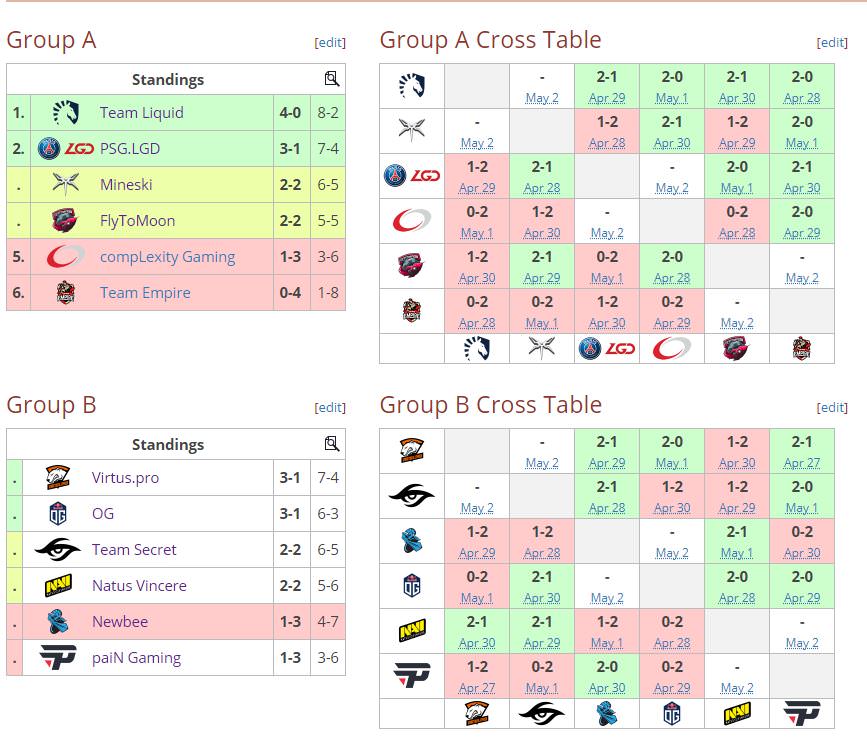