28th, Jul, 2017
A big win for amateur Dota 2 players from the SEA region as the New Blood Championship, which was recently announced aims to shine the spotlight upon them. Hosted by Purpose Win Entertainment Limited and Fallout Gaming, who recently hosted the NESO Galaxy Battles, the NBC focuses on amateur players from the SEA region and with a massive prize pool of 25000$ on the line, things are about to get intense.

The competition is divided into 3 distinct phases which are as follows:

1.Online Qualifiers – Region wise (August-September)
These are region wise qualifiers with a focus on 6 regions: Malaysia, Indonesia, Thailand, Vietnam, Philippines and Rest of SEA.  The winners of the rest of SEA qualify directly for the final LAN in Jakarta, Indonesia.

2. Region wise LANS (September – October)
The other 5 regions will have separate LAN qualifiers where 16 teams from the previous stage will battle it out and only one will qualify for the final phase. Each region also has a 2000$ prize pool for this LAN.

3. Main event (October)
The main event will feature one team from each region and another 2 will be invited by the organization based on partner event (GamePlan’s amateur Dota 2 tournament hosted by Geneysis Esports) giving us a total of 8
teams. These teams will travel to Jakarta Indonesia to comepete for a prize pool of USD 25,000. 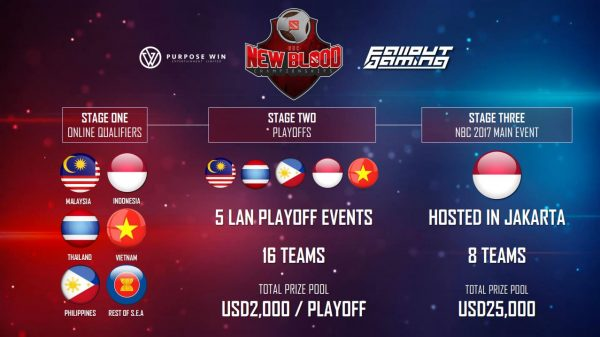 The prize pool for the main event is 25,000$ plus another  10,000$ in the region specific LANs. The top 2 teams at NBC will also get slots at an international tournament which will be held in Manila sometime in January 2018. The 3rd and 4th placed teams will be able to start at the ro16 in the qualifiers for this event as well.

The New Blood Championship is strictly for amateur teams and there will be opportunities given to amateur analysts, casters and other roles which are crucial to the esports ecosystem.  This is definitely one of the best tournaments in the SEA region that focuses on budding talent and only time will tell if a superstar can be molded from it.

Registrations for the tournament are now open! Click HERE to register!
About UsContact UsServicesRSS
DisclaimerAdvertise With UsArchiveEditorial Team