In a surprising move, FaZe Clan has just announced the addition of Filip ‘Neo’ Kubski to their roster. He has joined the team as a substitute for now and will be playing with the team in the upcoming events as an IGL, effective immediately.

Neo fits perfectly within FaZe as the organization has been looking for a capable IGL to lead the team so as to take some pressure off NiKo, whose game has seen instability since taking up the role of an IGL. This is a big opportunity for NiKo to step up his game and play a bit freely as Neo takes control of the reins. Let’s see how well it all works out for FaZe. 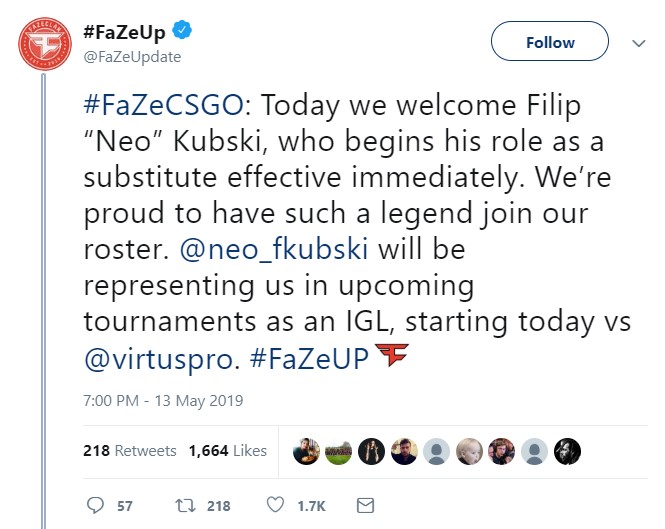 The Polish legend is making his return to competitive CS:GO after sitting out for a period of almost six months now. Neo must be craving for some action and what better opportunity than to play along with such talented players.

Though along with his arrival there was another change announced as Dauren ‘AdreN’ Kystaubayev departs. AdreN had been playing with FaZe since the beginning of 2019 and though his contract was officially signed till the end of Katowice, it got extended by a period of two more months. He contributed to the team’s recent victory at the BLAST Pro Series: Miami but had to go in order to make space for Neo. 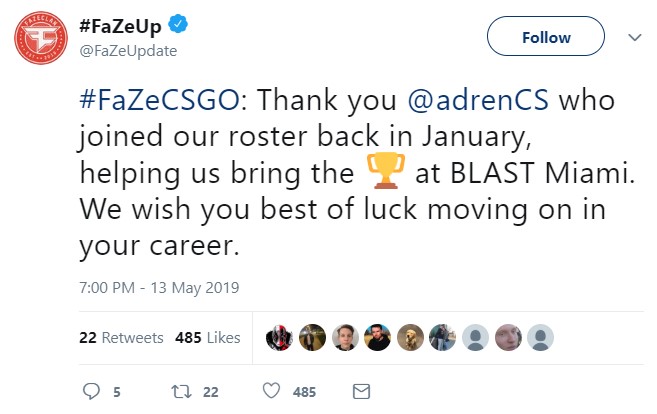 Neo’s journey with the heavily talented team starts today itself as they go up against Virtus.Pro. It will be a bit awkward to see Neo play against the very team that he had been a part of for the better time part of his career. The game will surely be high on emotions as it will mostly be seen as a Neo vs VP matchup rather than FaZe playing against them.

Neo is in testing waters at the moment and he will be looking out to give it his best shot, it has been a very long time since Neo has played for some other organization. Hope he doesn’t go soft on VP and is able to perform up to his standards.

Will this decision turn out to be the breakout decision for FaZe? What do you guys think?